Donald Trump and his Republican allies have two definitions of the term, "golden showers." The first concerns a notorious--and as-yet unsubstantiated--claim from the so-called Russian dossier: Decorum prohibits elaborating further here. The second meaning of the term, however, describes any public policy--usually involving taxes--which overwhelmingly delivers its benefits to the very richest people in America. The plutocratic pleasure from this right-wing fetish is all the more ecstatic if raining cash on the gilded-class can be sold under the guise of winnings for workers.
So it is with the supposed "Tax Cuts and Jobs Act" (TCJA) Republicans in both houses of Congress have been trying to rush largely unseen to President Trump's desk. This $1.5 trillion, 10-year liquid gold waterfall for the wealthy doesn't trickle down to average Americans. Instead, its new income tax brackets, elimination of the Alternative Minimum Tax (AMT), steep reductions in corporate taxes, bonanza for "pass-through" businesses and abolition of the estate tax guarantee the richest investors and financially-favored families will take all--or, at least, almost all. 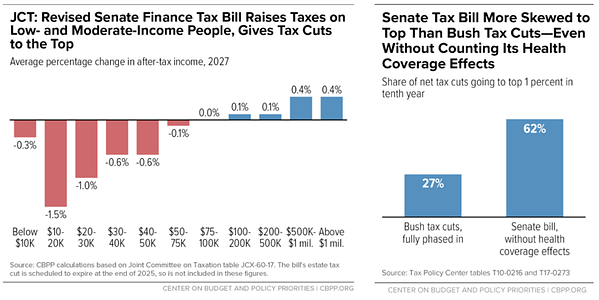 Now, you wouldn't know any of this from the myth-making generated by the Trump White House and the usual suspects among right-wing economists. As Lawrence Summers and Brad Delong among others explained, GOP claims that "the Republican bills could boost GDP 3% to 4% long term" and "American annual household income could increase by an average of $4,000" are belied by history, the clear consensus of economists. After all, the strong 3.3 percent GDP number for the third quarter and low unemployment shows the Obama expansion has continued uninterrupted. Ten years after the start of the 2007 recession, actual U.S. economic output has finally reached its full potential. With interest rates low, corporate profits high and U.S. firms sitting on stacks of cash, capital stocks are simply not an issue.
Nevertheless, Republicans want to slash the statutory corporate tax rate from 35 to 20 percent. (It is worth noting that President Obama repeatedly proposed lowering it to 28 percent; Republicans in Congress balked.) Thanks to a wide range of tax breaks they already enjoy, American businesses face an effective tax rate of 18.6 percent, a figure comparable to most U.S. economic competitors. That's why, as Bloomberg reported on Wednesday, "Major companies including Cisco Systems Inc., Pfizer Inc. and Coca-Cola Co. say they'll turn over most gains from proposed corporate tax cuts to their shareholders, undercutting President Donald Trump's promise that his plan will create jobs and boost wages for the middle class." That doesn't square with Trump's promise this week in Missouri that "our focus is on helping the folks who work in the mailrooms and the machine shops of America."

Instead of hiring more workers or raising their pay, many companies say they'll first increase dividends or buy back their own shares.
Robert Bradway, chief executive of Amgen Inc., said in an Oct. 25 earnings call that the company has been "actively returning capital in the form of growing dividend and buyback and I'd expect us to continue that." Executives including Coca-Cola CEO James Quincey, Pfizer Chief Financial Officer Frank D'Amelio and Cisco CFO Kelly Kramer have recently made similar statements.
"We'll be able to get much more aggressive on the share buyback" after a tax cut, Kramer said in a Nov. 16 interview.

"Companies are sitting on large amounts of cash. They're not financially constrained. They're still working for their shareholders, primarily."