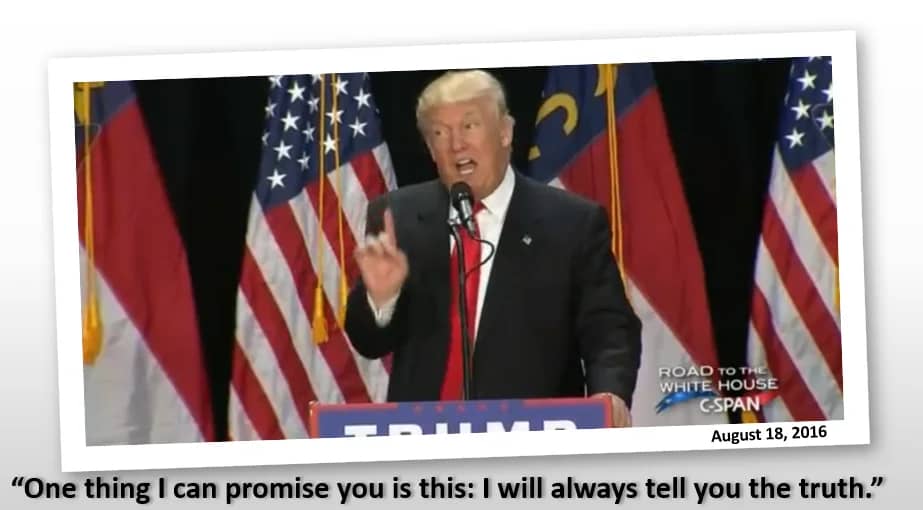 As President, Donald Trump broke a long list of promises he made to the American people. He didn’t build a big, beautiful wall, and certainly did not get Mexico to pay for it. Far from being on track to eliminate the entire national debt “over a period of eight years,” Trump only added to the red ink (even before his Coronavirus catastrophe). Similarly, the self-proclaimed businessman-president didn’t come close to averaging four percent economic growth each year and was not in fact “the greatest jobs producer God ever created.” His tax cuts did not “pay for themselves” and did not, as he repeatedly bragged, “cost me a fortune.” Despite his brutally cruel immigration policies, President Trump did not deport all 11 million undocumented immigrants in the U.S. “in 18 months to two years.” And not only did Trump not deliver on his pledge that “we’re going to have insurance for everybody,” his administration backed the Texas v. United States lawsuit that could lead to 20 million Americans losing their health insurance altogether.

But of all of Trump’s abandoned pledges and violated vows, one tops them all. In an August 18, 2016 speech commentators like Chris Cillizza and Chuck Todd praised as establishing “a stunning change in tone” and “Trump 3.0,” Candidate Donald Trump unveiled his meta lie to the American people. As his new campaign team of Steve Bannon and Kellyanne Conway looked on at his event in Charlotte, North Carolina, Trump proclaimed:

One thing I can promise you is this: I will always tell you the truth.

As it turned out, by “always” Donald Trump actually meant “less than 30 percent of the time.” As of November 2, 2020, Politifact evaluated 898 statements Trump had made. Seventy-two percent were judged to be “Mostly False” (20%), “False” (36%) or “Pants on Fire (16%). Trump’s dishonest only grew worse after he entered the Oval Office.

But if the share of Donald Trump’s pronouncements deemed false is stunning, the sheer volume of his lies is absolutely jaw-dropping. As of August 27, 2020, the Washington Post documented that the 45th President of the United States had lied to the American people 22,247 times in just 1,316 days. To put Trump’s mendacity into historical context, the New York Times found in December 2017 that “In his first 10 months, Trump told nearly six times as many falsehoods as Obama did during his entire presidency.”

As the old saw goes, “integrity is what you do when no one is watching.” Of course, what a public figure does when all eyes are upon him is a character test, too. In Donald Trump’s case, we have the receipts. And that makes Donald Trump, as Ben Franklin (or was it Mother Teresa?) supposedly quipped, “a lying sack of sh*t.” As these three pictures together show, it’s time for him to go.

One comment on “Donald Trump’s Presidency in Three Pictures”