Three Years Ago Today: Trump Promised "I Will Always Tell You the Truth"

Presidential candidate Donald Trump made a lot of promises on his way to the White House. Most ranged from the outright laughable to the literally impossible. Predictably, very few of Trump's guarantees came to pass. He did not "build a wall" and have Mexico pay for it. President Trump did not provide health "insurance for everybody." Far from eliminating the entire national debt of the United States "over a period of 8 years," the Trump administration has hemorrhaged trillions more red ink. The mushrooming annual Trump budget deficits are fueled in part by his $1.5 trillion tax cut windfall for the wealthy, which most certainly did not "pay for themselves. As for his pledge to average 4 percent annual economic growth, Trump isn't even close. 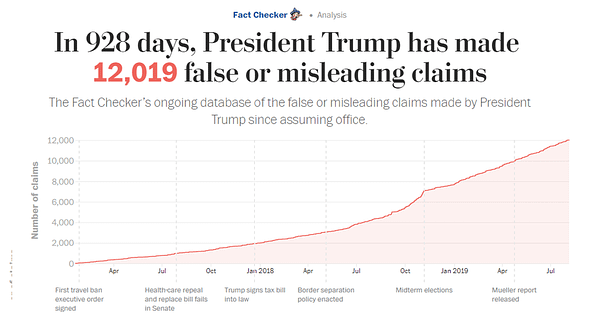 But of all Trump's vows to the American people, one stands out as his "meta" broken promise. Three years ago today on August 18, 2016, Donald Trump under the new management of Steve Bannon and Kellyanne Conway rebooted his campaign with this pledge:

But one thing I can promise you is this: I will always tell you the truth.
I speak the truth for all of you, and for everyone in this country who doesn't have a voice. [Emphasis mine.]

If that was candidate Trump's contract with the American people, it's fair to say President Trump has been in breach since the moment he took the oath of office.
Continue reading Daily Kos.