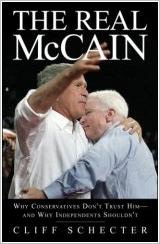 Back in 2000, Democratic strategist and political writer Cliff Schecter contributed $20 to the presidential campaign of Arizona Republican Senator John McCain. An admirer of McCain's independent streak then in opposing Republican orthodoxy on supply-side tax cuts and overturning Roe v Wade, Schecter admitted, "I trusted him." Eight years and seemingly endless McCain flip-flops later, Cliff Schecter wants his money back.
That in a nutshell is the genesis of Schecter's new book, The Real McCain: Why Conservatives Don't Trust Him and Why Independents Shouldn't. Betrayed by McCain across almost every issue foreign and domestic, Schecter now says "I realized I'd been snookered." The result in The Real McCain is an essential handbook for the 2008 election, a chronicle of John McCain's devolution from mythical maverick to craven opportunist.
I recently had the chance to catch up with Schecter to talk about his book and his take on the political landscape in the run-up to the election in November. Our conversation, like his book, was fast-moving and frequently funny.
At the outset, it's worth noting that Schecter is in some ways an unlikely messenger against McCain. To be sure, the progressive firebrand and Democratic strategist (his resume features work on Bill Clinton's 1996 reelection campaign and a stint with uber-polling firm Penn Schoen) proudly advances the liberal line on cable news shows, in newspaper columns as well as at blogs including FireDogLake and Huffington Post. But in the past, the New Yorker crossed the partisan no-man's land to pull the lever for Republican Governor George Pataki. And, as he put it, "I'm embarrassed to admit that I once voted for Rudy Giuliani."
But Schecter's dalliance with the dark side reached its apogee with then straight-talking moderate John McCain. "There's a reason I liked him in 2000," Schecter said. Bucking the party line on women's reproductive rights, McCain in 1999 announced "certainly in the short term, or even the long term, I would not support repeal of Roe v. Wade, which would then force X number of women in America to [undergo] illegal and dangerous operations." McCain similarly opposed the Bush tax cuts for the wealthiest Americans, claiming in 2001, "I cannot in good conscience support a tax cut in which so many of the benefits go to the most fortunate among us at the expense of middle-class Americans who need tax relief." And Schecter remembered John McCain's August 1990 words on the eve of the Gulf War:

"If you get involved in a major ground war in the Saudi desert, I think support will erode significantly. Nor should it be supported. We even cannot contemplate, in my view, trading American blood for Iraqi blood."

Fast forward to the 2008 election, as Schecter details, and John McCain the maverick, the reformer and the moderate is a distant memory. "That McCain," he writes, "is no longer with us, if he ever truly was."
So when publisher PoliPointPress began looking to the liberal commentariat last year for a campaign '08 profile of John McCain, Cliff Schecter was a natural selection. As he described it, "I was looking for redemption."
The result in The Real McCain is a devastating account of John McCain's transformation from ersatz GOP rebel to, as Schecter bluntly phrased it, "whore for the Bush administration." Starting with McCain's February 2007 visit to the National Religious Broadcasters convention to reach out to those he once deemed "agents of intolerance," The Real McCain takes readers on a tour of John McCain's endless reversals on the road to the White House. From abortion, supply side tax cuts and the religious right to benefits for the troops, detainee torture and the complete post-Keating Five embrace of the K Street lobbying machine and so many more, Schecter recounts McCain time and again swapping principle for political expediency. (In a chapter titled "McCain Has Left the Building," Schecter approvingly cites a high ranking Senate staffer who aptly summed it up, "Whenever we see anyone wearing their flip-flops, we say, 'I see you have your McCains on today.'")
To trace the twists and U-turns of McCain's political career, Schecter builds on Jacob Weisberg's notion of the Three McCains. ("McCain was not always a moderate, tolerant character," Weisberg famously said, "He was a conservative before he was a liberal before he became a conservative again.") In The Real McCain, the Arizona Senator emerges as a piece of buggy software, with each successive version exposing new flaws while becoming ever harder to understand.
As Schecter recounts, version 1.0 was the Goldwater libertarian of McCain's early years in the House and Senate. But in the run-up to the 2000 election, McCain found a new niche and created a new persona to outflank George W. Bush and Steve Forbes during the Republican primaries. As he put it, "McCain seemed to spot his best chance as staking the out the position of the moderate Republican - McCain 2.0."
That McCain, the maverick of the "Straight Talk Express," cemented his status as a media darling which no development to contrary since seems able to dislodge from the minds of the press corps. (It's no accident MSNBC's Chris Matthews acknowledged, "The press loves McCain. We're his base.")
Alas, that McCain, too, is history, replaced by the neo-conservative release 3.0. Still stinging from his 2000 defeat, McCain in the intervening years reinvented himself again. Eager to please the GOP's hard right base that rejected him earlier, John McCain heading into the 2008 Republican primaries reversed course on the Bush tax cuts, called for overturning Roe v. Wade, backtracked on his own immigration reform proposal and sounded even more belligerent than the President on Iraq and Iran. As the Arizona Republic reported, that McCain was hardly a maverick, voting with his party when it mattered most since 1999. In 2007 alone, McCain voted with George W. Bush 95% of the time. By 2008, his record reached a perfect 100%. As for the "fully formed neoconservative McCain," Schecter says, "call him McCain 3.0."
Since Schecter's book was published, John McCain breezed through the GOP primaries to lock up the Republican presidential nomination. I asked Schecter if Americans were witnessing a McCain Version 4.0, a born-again moderate racing to the center to distance himself from his debilitated Republican Party and its wildly unpopular president.
According to Schecter, I'm giving John McCain way too much credit. With his stands on global warming, ANWR and offshore drilling, for example, changing "from one day to the next," Schecter said, "he's killing his campaign."

"McCain 4.0 doesn't know who the hell he is. He's running in all directions. He's combined all three McCains to try to thread the needle between a rock and a far-right place."

No doubt the most controversial part of Schecter's book arose from his investigation into John McCain's legendary temper. His startling allegation that back in 1992 McCain called his wife Cindy a "c-word" in front of reporters (who spoke of the episode to Schecter only on the condition of anonymity) created a media frenzy - and blowback. Schecter acknowledged the press coverage has been a "double-edged sword," bringing his book notoriety and sales perhaps at the expense of its big picture critique of McCain's policies, persona and temperament. "I do worry that the larger message hasn't gotten out there," he told me, noting that some cable news shows might be "scared of having me on" due either due to the subject matter of the incident or out of fear of offending McCain. In the wake of Bill Clinton's MonicaGate, Schecter sighed, "I can't believe the media would be so squeamish."
At the end of the day, Schecter stands by his decision and his sources. Given the three sources who each covered McCain going back into the 1990's, "it would be a disservice" not to have gone forward with the story. (For its part, the McCain campaign branded Schecter a "trash journalist." The candidate himself has not formally denied the allegations.) Further bolstering his case, Schecter notes, two of his other revelations about McCain (one involving a scuffle with now-indicted Congressman Rick Renzi, the other McCain's role in the attempted sacking of Common Cause president Chellie Pingree over campaign finance reform) were subsequently corroborated by the Washington Post and the American Prospect, respectively.
Ultimately, Cliff Schecter's book The Real McCain is not about the myriad, salacious details of the private life of the Vietnam war hero turned White House hopeful. "This is a cautionary tale," Schecter writes, of:

"A conditional friend to conservatives, an appealing maverick to independents, and a noxious Bush apologist to Democrats, McCain is a unique blend of allegiances and enmities unprecedented in American politics."

Unfortunately, for too many Americans - and especially the American media - John McCain is still a kind of political Rorschach test in which people see what they want to see.
But not Cliff Schecter. Not anymore.
(Note: For the purposes of full disclosure, it should be noted that Cliff Schecter and I have cited each other's material in our respective writing and have corresponded in the past.)

2 comments on “A Conversation with Real McCain Author Cliff Schecter”