A Perfect Storm for Regulatory Reform 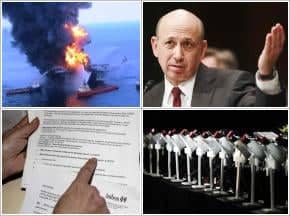 For conservative free-market ideologues, April has been the cruelest month, indeed. In a perfect storm washing over Republican foes of government regulation, the last several days alone featured unbridled Wall Street greed, corporate mismanagement of a devastating oil spill, and corruption and criminality in the nation's coal mines. Meanwhile, in another blow to GOP "repeal and replace" orthodoxy, Americans health insurers have already begun to end their cruel practice of rescission years before the mandate enshrined by President Obama's health reform law.
Which means, as Ricky Ricardo might say (except, perhaps, in Arizona), Republicans have "some 'splainin' to do."
Facing an overwhelming public backlash over its policies of dropping coverage for patients suffering from AIDS, breast cancer and myriad other conditions, the American Health Insurance Plans industry group announced new curbs on its members' de facto death panels. In response, House Minority Leader John Boehner claimed credit for the health care bill he and every member of the Republican caucus voted against:

"Both of those ideas [ending rescissions and allowing children to stay on parents' policies until age 26], by the way, came from Republicans, and are part of the common sense ideas that we ought to have in the law."

So much for "repeal and replace." (In a further irony, a Republican fundraising group has been coordinating with GOP state attorneys general on legal challenges to the individual mandate in the Affordable Care Act, the key ingredient to persuading insurers to end rescission in the first place.)
Meanwhile, the Senate Republican stonewall of financial regulatory reform also took a body blow this week. After adding three filibusters to their record count in their effort to protect predatory bankers on Wall Street, Mitch McConnell's GOP minority caved to public pressure to allow debate on the legislation to proceed. Their retreat was aided not only by Goldman Sachs' unapologetic rapaciousness during Senate hearings this week, but the damning company emails which preceded them. While Goldman's Fabrice "Fabulous Fab" Tourre joked that "the poor little subprime borrowers will not last so long," CEO Lloyd Blankfein admitted in November 2007:

"Of course we didn't dodge the mortgage mess. We lost money, then made more money than we lost because of shorts."

But the Goldman conflicts of interest which dominated the airwaves (and may bring criminal charges) s paled in comparison to the industry-enabled murder under ground.
Just days after President Obama eulogized the 29 miners killed at Massey Energy's Montcoal, West Virginia facility, a roof collapse at a Kentucky mine claimed two more lives. On Tuesday, Mine Safety and Health Administration chief Joe Main warned Congress that MSHA's lack of regulatory tools (including subpoena power) virtually guaranteed "You just about have to have an explosion occur" to force a closure for imminent safety violations." Sad but true. As the Los Angeles Times noted, Don Blankenship's Massey Energy Co. "was cited 515 times for safety violations at the Upper Big Branch mine last year and 124 times this year before the April 5 explosion."
But now the heat is being turned up on both Blankenship and a toothless MSHA further defanged during the Bush administration. As NPR reported this morning, the FBI is now investigating Massey Energy and U.S. officials charged with regulating it:

Sources familiar with the investigation say the FBI is looking into possible bribery of officials of the Mine Safety and Health Administration, the federal agency that inspects and regulates mining. The sources say FBI agents are also exploring potential criminal negligence on the part of Massey Energy, the owner of the Upper Big Branch mine.

Then there's the devastating oil spill now pouring ashore the Gulf States. After BP downplayed both the scope of the spill and its ability to contain it, the Obama administration jumped in to ratchet up the federal response. (The Halliburton angle doesn't help BP's image problem, either.) And acknowledging the blow to his plans for expanded offshore drilling, President Obama Friday announced a halt pending an investigation into the causes of the Deepwater Horizon platform explosion and subsequent deluge of crude onto the Gulf Coast.
But among Republicans, the response has largely been silence. While RNC chairman Michael Steele was been AWOL on the subject, Newt Gingrich's "Drill Here, Drill Now, Pay Less" campaign proceeds uninterrupted. As for Sarah Palin, who failed to remember Alaska's Exxon Valdez case when asked by Katie Couric about Supreme Court decisions with which she disagreed, she turned to Twitter:

Apparently, government's role, as Palin suggested at the Southern Republican Leadership Conference three weeks ago, is to let industry "drill, baby, drill, not stall, baby, stall" and then just get out of the way.
Still, the Republican effort to block all government regulation of the market all the time continues, just under a different slogan. After his "permanent taxpayer bailout" talking on financial reform was laughed off the national stage, GOP spinmeister Frank Luntz is back with another sound bite to stall Democratic reform efforts. Wall Street reform, he claims, is now a "Checkbook Tax."
Nevertheless, that's going to be hard for Americans to swallow after a week which showcased unfettered industries producing unmitigated disasters. After all, people are still gulping oil and choking on coal dust.