A Week in the Life of the One Percent 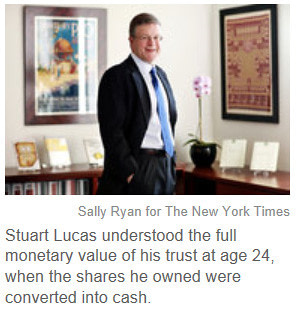 Judging by the stories dominating the domestic news, the past couple of weeks have not been kind to that 47 percent of Americans Mitt Romney mocked as takers, freeloaders and self-proclaimed victims. While the Washington Post profiled a Rhode Island town in which a third of the residents are dependent on food stamps, former SNAP supporter Kansas Republican Senator Pat Roberts proposed slashing the program by $36 billion over the next decade. Elsewhere, NPR's This American Life portrayed an out-of-control Social Security disability program. Meanwhile back in Washington, the Obama administration signaled its openness to reforms to both Social Security and Medicare.
But if the media consensus suggests that the worst of times is coming for those counting on the already fragile American social safety net, it is the best of times for the select few of the one percent. As a brief survey of recent press accounts suggests, everything is coming up roses for the wealth, political power and future prospects enjoyed by the unaffected and out-of-touch at the very top of the social ladder.
That's surely the case when the biggest problem you face is not providing your children's next meal, but giving them the proper education on how to manage their trust fund. Last week the New York Times illustrated that challenge by telling the plight of Carnation heir Stuart Lucas, who "learned about his trust fund the old-fashioned way: when he was 18 and went east to Dartmouth College." As the Times explained the travails of the tragically rich:

For many American families with wealth, the moment when their children learn how much money they have at their disposal causes profound anxiety. They fear that their children will not know what to do with the money and either squander it or not work as hard as they might otherwise.

As things are going now, they won't have to work very hard at all. Because while the stock market has doubled in value over the last four years, "just 10 percent of Americans own about 80 percent of the stock wealth in the United States. That ratio hasn't changed much since the 1980s." As Brad Plumer explained in the Washington Post: 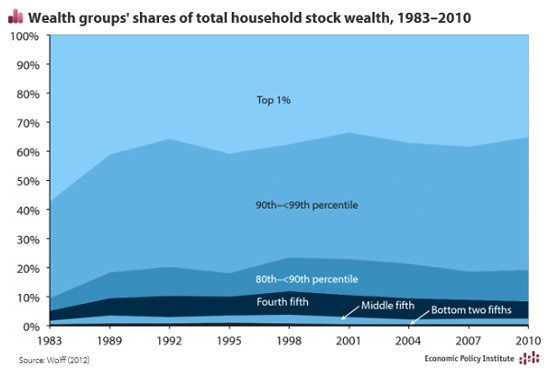 Still, the higher tax rates on upper income Americans included in January's fiscal cliff deal must be taking a toll on the Republicans' so-called "job creators." But as a new survey this week revealed, those House Speaker John Boehner described as "the very people that we expect to reinvest in our economy" are not suffering at all. As CNBC reported:

According to a new poll, a majority of people making $500,000 or more (those paying the higher income tax rate) said that the tax hikes have not impacted their spending, charitable giving or investment strategies.

(It should be noted that the well-to-do are comparatively stingy when it comes to charitable giving. As The Atlantic recently reminded readers, "The wealthiest Americans donate 1.3 percent of their income; the poorest, 3.2 percent." Research findings that "the rich are way more likely to prioritize their own self-interests above the interests of other people" and are "more likely to exhibit characteristics that we would stereotypically associate with, say, assholes" suggest that "insulation from people in need may dampen the charitable impulse.")
That relatively minor changes in income and capital gains tax rates are having a negligible impact on spending and investment by the richest Americans should come as no surprise. After all, after a brief dip during the recession that started in late 2007, U.S. income inequality has returned to record levels. And as Ezra Klein reported on March 22, recent research suggests that gap is a now a permanent fixture of American society. While the top one percent earns 17 percent of U.S. national income, they own 35 percent of its wealth. Looking at tax returns from 34,000 households between 1987 and 2009, the researchers found:

That stratospheric change in the fortunes of the rentier class is no accident. As Michael Lind described on March 22, the Rentier Agenda of low taxes on capital, the privatization of natural monopolies and the commitment to anti-inflationary macroeconomic policy has been incredibly successful for more than a generation. As Mike Konczal documented on Saturday, the rentiers' success in lowering estate and inheritance taxes is a major driving factor in the return to levels of income inequality not seen since before the Great Depression. Konczal noted that estimates from a survey of the literature in the late 1990s show an average of about 50 percent of the capital stock in the United States is inherited. He also looked at the work of economist Thomas Piketty and his analysis of French inequality data since 1820:

Much as Piketty found a "U-shaped" curve to inequality of income, he finds one for inheritance in France and postulates this trend is likely to be occurring in the United States as well. Piketty argues that "[o]ur empirical and theoretical findings suggest that inherited wealth will most likely play as big a role in twenty-first-century capitalism as it did in nineteenth-century capitalism." The best way to learn about the future of the economy will soon be to join the Jane Austen Society.

That conclusion came just days after Konczal's Washington Post colleague Plumer wrote "'Trickle-down consumption': How rising inequality can leave everyone worse off." Instead of once again focusing on why the top 1 percent has done so much better than everyone else, Plumer instead had a different inquiry:

An equally pressing question, though, is what those increasingly hefty incomes at the very top mean for the lives of everyone else. And a big, newly revised paper (pdf) by the University of Chicago's Marianne Bertrand and Adair Morse finds that there is a connection, but not a happy one: The gains of the rich have come alongside losses for the middle class.

And if the recent media jeremiads bemoaning the cost of food stamps, disability insurance, Social Security and Medicare are any indication, things will only get worse. Because when it comes to setting the terms of the public policy debate, the one percent has appropriated the political process as well. As Benjamin I. Page and Larry M. Bartels summed up recent research on the topic last week in the Los Angeles Times, "The ultra-rich share few of the priorities of most Americans, but their access to policymakers is greater." That is, the people who have already garnered much of the nation's wealth are asking all of the questions of our elected leaders:

Over the last two years, President Obama and Congress have put the country on track to reduce projected federal budget deficits by nearly $4 trillion. Yet when that process began, in early 2011, only about 12% of Americans in Gallup polls cited federal debt as the nation's most important problem. Two to three times as many cited unemployment and jobs as the biggest challenge facing the country.
So why did policymakers focus so intently on the deficit issue? One reason may be that the small minority that saw the deficit as the nation's priority had more clout than the majority that didn't.
We recently conducted a survey of top wealth-holders (with an average net worth of $14 million) in the Chicago area, one of the first studies to systematically examine the political attitudes of wealthy Americans. Our research found that the biggest concern of this top 1% of wealth-holders was curbing budget deficits and government spending. When surveyed, they ranked those things as priorities three times as often as they did unemployment -- and far more often than any other issue.