Abortion, Free Speech, and the Right to Lie 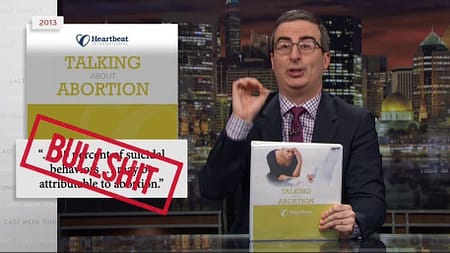 In a recent episode of Last Week Tonight, host John Oliver led a 20-minute deep dive into the world of "crisis pregnancy centers" (CPCs). With more than 3,500 such locations around the nation (more than double the number of facilities providing abortion services in the United States), CPCs exist to dissuade women from choosing to terminate their pregnancies. In pursuit of their mission to prevent abortions by almost any means necessary, crisis pregnancy centers can and do deceive their clients about what "care" they do offer (counseling, literature, videos, and "jelly on the belly") and don't provide (most notably abortion information and procedures). And as Oliver highlighted, no falsehood is too egregious--whether about the nonexistent link between abortion and breast cancer, mythical "post-abortion syndrome," fraudulent "facts" on fetal pain, or bogus statistics on the supposed dangers of the procedure--to keep it out of the talking points of the centers' ardent anti-abortion proprietors.
But for all the eye-opening moments in his hilariously disturbing segment, John Oliver omitted two points of badly needed context when it comes to the disinformation campaign being waged by America's crisis pregnancy centers. In March, the United States Supreme Court heard oral arguments in National Institute of Family and Life Advocates v. Becerra, a challenge to a California law requiring the 200 CPCs there to notify women that the state provides free or low-cost health care, contraception services, and abortion. From their questioning, the justices seemed skeptical of California's effort to limit the free speech rights of the Golden State's crisis pregnancy centers. Yet even as the Roberts-led court seems likely to protect the principle that these anti-abortion enterprises may lie to American women, Republican-controlled states around the country continue to mandate that abortion providers must lie to their patients.
At the heart of this and future cases are two considerations central to the free speech law in the United States.
Continue reading at Daily Kos.