After Insulting Half of American Catholics, Lou Holtz to Get Presidential Medal 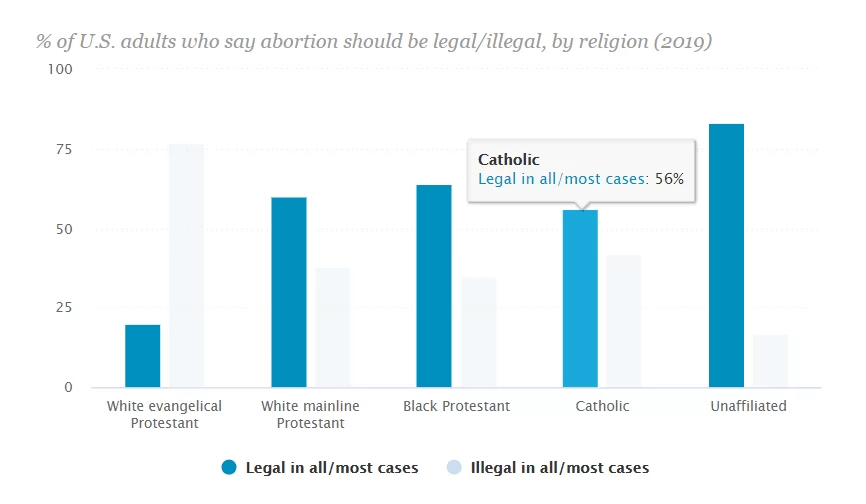 President Donald Trump announced on Friday that former Notre Dame football coach and current college football analyst Lou Holtz will receive the President Medal of Freedom. “There's a man that's an incredible leader, Lou Holtz,” Trump explained, “I've known him for a long time. He's been a friend of mine.”

“One of the important reasons he has my trust is because nobody is but a stronger advocate for the unborn than President Trump. The Biden-Harris ticket is the most radically pro-abortion campaign in history. They and other politicians are Catholics in name only and abandon innocent lives.” [Emphasis mine.]

Sadly for Holtz and Trump, their slander of the devout Biden has boomeranged on them. As it turns out, polls consistently show that a majority of America’s 70 million Catholics are pro-choice.

That reality was surely on the minds of the leaders at Notre Dame, which was quick to disavow the venomous remarks of their former coach. As university president Father John Jenkins cautioned:

“While Coach Lou Holtz is a former coach at Notre Dame, his use of the University’s name at the Republican National Convention must not be taken to imply that the University endorses his views, any candidate or any political party.

Moreover, we Catholics should remind ourselves that while we may judge the objective moral quality of another’s actions, we must never question the sincerity of another’s faith, which is due to the mysterious working of grace in that person’s heart.”

And in the hearts of more than half of U.S. Catholics, as with Americans overall, is support for the reproductive rights of women. As the Catholic News Agency reported in February:

According to a RealClear Opinion Research poll sponsored by EWTN and published on Monday, 47% of Catholics in the U.S. believe abortion is “intrinsically evil,” while a 53% hold otherwise.

Those findings from the Real Clear/EWTN poll echo the results of a Pew Research Center survey in 2019. Overall, 61 percent of Americans responded that abortion should be legal in all or most cases. At 56%, Catholics were little different than the country as a whole (see chart at top). White evangelicals were alone in their consistent opposition to women’s reproductive rights:

About three-quarters of white evangelical Protestants (77%) think abortion should be illegal in all or most cases.

By contrast, 83% of religiously unaffiliated Americans say abortion should be legal in all or most cases, as do nearly two-thirds of black Protestants (64%), six-in-ten white mainline Protestants (60%) and a slim majority of Catholics (56%).

In its 2018 and 2019 polling, Gallup found similar results. Overall, 29% of respondents said abortion should be legal in all circumstances. Another 14% support abortion rights in most cases, while a further 35% backed it in a few circumstances. Only 16% would ban the practice outright. Among Catholic Americans, the figures were 22%, 16% and 37%, with opposition in all cases totaling 22%.

To be sure, support for abortion among American drops at their frequency of church attendance increases. As was the case in Gallup’s 2009 survey, those who go to mass at least once a week are strongly opposed to abortion. Only 24% of regular churchgoers believed abortion was morally acceptable, compared to 52% of nonregular mass attendees.

Now, Coach Holtz is free to support whoever he wants for President of the United States. But he’s not free to lie about it, as he did after the RNC when he told Bill Hemmer of Fox News:

"When he said that you can abort a baby at the nine month of ... pregnancy, and that's perfectly all right? No, by the way I was taught, the Catholic Church, that's not all right and I'm going to speak up about it."

Neither Joe Biden nor any other Democrat has said such a thing.

Regardless, if Lou Holtz is upset about abortion, his argument isn’t with Joe Biden, but with over 35 million American Catholics who disagree with him. It won’t be the first time Holtz will be disappointed in his co-religionists. After all, Catholics preferred Barack Obama over Republicans John McCain in 2008 and Mitt Romney in 2012. As then-House Speaker John Boehner (R-OH) recounted, after Obama’s second inauguration Lou Holtz texted him:

“I’m done, finished, the country’s over with — we’re not doing this again!”

Then as now, half of America’s Catholics disagreed with him. Lou Holtz will have to commiserate with his fellow Presidential Medal of Freedom winner, Rush Limbaugh.