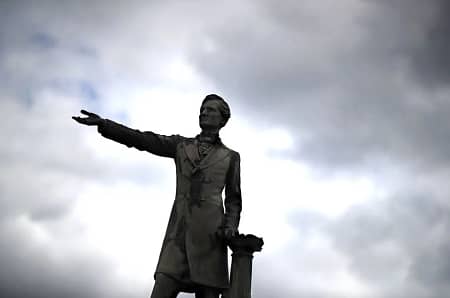 Sunday, December 15, 2019
Hollywood Cemetery
Richmond, Virginia
Dearest Ambassador Haley,
I am writing from the distant past to offer some modest thoughts about your exciting future. I understand congratulations are in order as you embark on the journey to seek the presidential nomination of the party of states' rights, nullification, and secession. (One hundred thirty years after my death, the irony is not lost on me that the Party of Abraham Lincoln is now where those sacred values reside.)
Now, I appreciate that you have not formally declared your intentions for 2024 or, if today's abolitionists, free soilers, and civil rights crusaders of the North and West succeed in their current treachery, in 2020. But with the resumption of your defense of the flag of our Confederacy, you sent an unmistakable signal to our shared supporters that you shall pursue the highest office in the land.
It is on the meaning of that glorious banner under which in 1861 our "little army, derided for its want of arms, derided for its lack of all the essential material of war, has met the grand army of the enemy, routed it at every point, and now it flies, inglorious in retreat before our victorious columns" that I now offer you counsel. Having proudly defended the flag in 2015 "as a memorial, a way to honor ancestors who came to the service of their state during time of conflict" and in 2019 as representing "service, sacrifice and heritage," you nevertheless removed our pride from the capitol in Columbia. Of the gallant avenger Dylann Roof, a young man any white Southerner with a soul could easily imagine riding alongside Nathan Bedford Forrest or marching with Stonewall Jackson, you said "the hate-filled murderer who massacred our brothers and sisters in Charleston has a sick and twisted view of the flag," a view which "hijacked everything that people thought of."
On this, you are tragically wrong. Dylann Roof understood what I explained all those many years ago. "Our cause was so just, so sacred, that had I known all that has come to pass, had I known what was to be inflicted upon me, all that my country was to suffer, all that our posterity was to endure, I would do it all over again." Our glorious and heroic flag, now as then, celebrates that cause. As I proclaimed to our people after my inauguration in 1861:

"We recognized the negro as God and God's Book and God's laws, in nature, tell us to recognize him. Our inferior, fitted expressly for servitude."

I was never shy about telling everyone, North and South, that our inheritance and our cause of its preservation came from God. Slavery was, I reminded the United States Senate in 1860, "a form of civil government for those who by their nature are not fit to govern themselves."
Continue reading at Daily Kos.