Austerity Cost U.S. Up to 2.2 Million Jobs in Weakest Recovery since WWII

Almost everything you need to know about the self-destructive economic policy coming out of Congress was contained in two simple statements this week. While the Federal Reserve warned that "fiscal policy is restraining economic growth," the Republican National Committee released an ad crowing that "the sequester is here to stay." Judging by the April jobs numbers published today, the Republican Party can declare "mission accomplished." After all, the public sector shed another 11,000 workers last month, pushing the total just March 2010 to 625,000. Worse still, a new analysis suggests, compared to past recoveries austerity policies at the federal, state and local government level have cost the U.S. up to 2.2 million jobs. 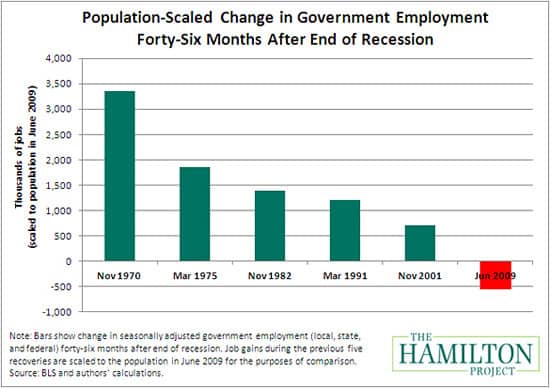 That's the conclusion from the Hamilton Project. It's not just the collapse of the housing market and the implosion of the financial sector which resulted in the slowest American recovery since World War II. Much of the damage has been self-inflicted by policymakers in Washington and the 50 states. Noting that the private sector has added 6.8 million jobs since March 2010 and 2.2 million in just the last year, the public sector "has been a drag on the economy."

We find that the last several years' policy choices are starkly different from those following previous recessions. Specifically, there are 2.2 million fewer jobs today, relative to what would have occurred with the policy response typical of the five preceding recessions.

The Hamilton Project is far from alone in lamenting the "anti-stimulus" of cutbacks across all levels of government. In April 2012, the Economic Policy Institute similarly concluded:

The current recovery is the only one that has seen public-sector losses over its first 31 months...
If public-sector employment had grown since June 2009 by the average amount it grew in the three previous recoveries (2.8 percent) instead of shrinking by 2.5 percent, there would be 1.2 million more public-sector jobs in the U.S. economy today. In addition, these extra public-sector jobs would have helped preserve about 500,000 private-sector jobs.

That March, Paul Krugman expressed the same point, but with some inconvenient historical context for the Party of Reagan. "In fact, if it weren't for this destructive fiscal austerity," Krugman explained, "Our unemployment rate would almost certainly be lower now than it was at a comparable stage of the 'Morning in America' recovery during the Reagan era."

We're talking big numbers here. If government employment under Mr. Obama had grown at Reagan-era rates, 1.3 million more Americans would be working as schoolteachers, firefighters, police officers, etc., than are currently employed in such jobs.
And once you take the effects of public spending on private employment into account, a rough estimate is that the unemployment rate would be 1.5 percentage points lower than it is, or below 7 percent -- significantly better than the Reagan economy at this stage.

Even the Wall Street Journal acknowledged that U.S. public sector austerity was inflicting significant--and mostly unnecessary--pain on American workers. A year ago, the Journal looked at the more volatile household survey of unemployment to suggest the impact of public sector contraction might be much, much worse than Labor Department numbers would show:

In the three months ended April, it shows that there were an average 20.3 million people engaged in government work, 1.2 million fewer than the average for the three months ended December 2008. That is more than double the job losses registered by the establishment survey.
The unemployment rate would be far lower if it hadn't been for those cuts: If there were as many people working in government as there were in December 2008, the unemployment rate in April would have been 7.1%, not 8.1%.

With federal spending roughly flat while state and local outlays have only just returned to 2008 levels, the result is what Floyd Norris of the New York Times called "the incredible shrinking U.S. government." When it comes to government's contribution to total American gross domestic product (GDP), the U.S. hasn't seen this kind of contraction since the post-Korean War demobilization of the mid-1950's.
Diane Swonk, chief economist for Mesirow Financial in Chicago put the impact of American austerity in perspective:

"What's the biggest drag on the economy? The government," Ms. Swonk said. "If the government simply did no harm, we could be at escape velocity."
Without the impact of federal cuts and higher taxes, Ms. Swonk estimates, annual economic growth would be close to 4 percent, above the 2.5 percent pace she is expecting in 2013.

Instead, the U.S. economy will muddle through, producing slow jobs gains that will take five years to return to pre-recession levels. And despite warnings from the Congressional Budget Office that the sequester Republicans extorted during their 2011 debt ceiling hostage-taking will slash 750,000 and 0.6 percent from GDP, Uncle Sam's handcuffs remain firmly in place. As for President Obama's proposed budget which would eliminate the $1.2 trillion in cuts over the next decade, Republicans like House Speaker John Boehner have only one response to the disappointing jobs numbers.
The sequester is here to stay.