Having won one class war, Republicans are starting a second. To perpetuate record levels of income inequality not seen since before the Great Depression, conservatives are agitating for middle class Americans to wage a civil war on each other. Their latest divide-and-conquer tactic is to portray government workers as "takers" and "parasites" somehow responsible for the decline of manufacturing and other sectors of the U.S. economy. Of course, like so much Republican mythmaking, the claim not only is untrue, but a cynical diversion to deflect attention from the real winners in the class war.
The latest formulation in the conservative attack on public employees comes from Club for Growth cheerleader and Wall Street Journal regular Stephen Moore. Moore, who in 2004 authored the justifiably forgotten book, Bullish on Bush: How George Bush's Ownership Society Will Make America Stronger, is back to accuse government workers of sucking the life blood out of the U.S. economy. In his op-ed "We've Become a Nation of Takers, Not Makers," Moore placed the blame for the loss of non-service sector jobs where it doesn't belong:

If you want to understand better why so many states--from New York to Wisconsin to California--are teetering on the brink of bankruptcy, consider this depressing statistic: Today in America there are nearly twice as many people working for the government (22.5 million) than in all of manufacturing (11.5 million). This is an almost exact reversal of the situation in 1960, when there were 15 million workers in manufacturing and 8.7 million collecting a paycheck from the government.
It gets worse. More Americans work for the government than work in construction, farming, fishing, forestry, manufacturing, mining and utilities combined. We have moved decisively from a nation of makers to a nation of takers. Nearly half of the $2.2 trillion cost of state and local governments is the $1 trillion-a-year tab for pay and benefits of state and local employees. Is it any wonder that so many states and cities cannot pay their bills?

Over at the Power Line blog, John Hinderaker regurgitated Moore's talking point with some additional bile.

There are many reasons for pessimism these days, but first on the list is the prospect that the growth of the public sector at the expense of the private may have become irreversible.

There are so problems with this phony war, it's difficult to know where to begin.
For openers, states and cities can't pay their bills because of the triple whammy of the Bush recession. Even with spending now well below 2008 levels, the downturn-induced drop in revenues and increased demand for social services coupled with the looming end of the American Recovery and Reinvestment Act (ARRA) is producing yawning gaps in state budgets. And the states, all but one of which must balance budget each year, are responding with sharp spending cuts, massive layoffs and deferred payments to state employee pension funds. Making matters worse, state tax revenue has declined in the last two years not just because of the recession, but because of reckless, treasury-draining tax cuts. Looking at Ohio, Louisiana, Texas and Arizona, McClatchy rightly concluded last week, "States broke? Maybe they cut taxes too much."
Second, Moore and Hinderaker are perpetuating the Republican myth about a supposedly the out-of-control expansion of the government work force. With the exception of the brief jump to conduct the 2010 U.S. Census, overall employment at the federal, state and local level is now lower than when the Bush recession began in December 2007. By last November, state and local governments had shed 407,000 jobs (-39,000 state, -368,000 local) since their peak in August 2008. (While private employers added 230,000 in March, local governments dropped 15,000 workers.) With state budget shortfalls estimated to top $100 billion for each of the next two years, analysts including Moody's Economics and the Center on Budget and Policy Priorities have forecast more state and local job losses reaching between 400,000 and 900,000. It's no wonder Ezra Klein of the Washington deemed cutbacks at the state level the "anti-stimulus." 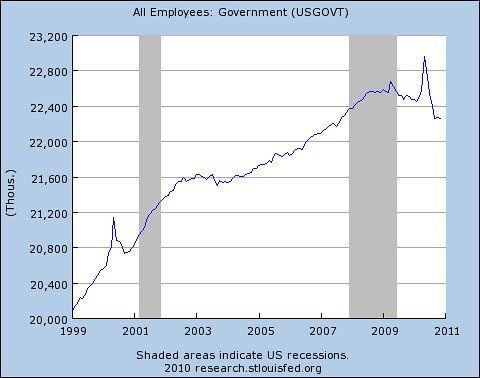 As these charts from the St. Louis Federal Reserve show, employment by states and local governments have indeed grown dramatically since 1960. The gains (from roughly 1.5 million workers to 5 million in the states and from about 5 million to 14 million municipal employees) exceed the 72% growth in U.S. population during the same time 50 year time frame. But in places like Michigan, Ohio and even California, the ranks of state worker have shrunk since 2000. Meanwhile, the federal civilian workforce is not only smaller now in past decades; as a percentage of the U.S. population, federal employment is near 50 year lows. 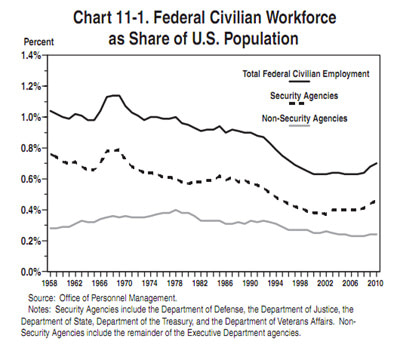 Regardless, these trends in government employment have virtually nothing to do with the transformation of the American economy. Instead, the impacts of globalization, the relative decline of American manufacturing competitiveness, the explosive growth of the U.S financial services and health care sectors, regressive taxation and rampant deregulation account for the dramatic shift from a goods-producing to a service economy. These disturbing developments are unrelated to the now-reversing expansion of state and local government payrolls.
And that goes double for the pay of government workers themselves.
A 2009 assessment by the Office of Personnel Management found that on average comparable federal civilian workers are paid 22 percent less than private workers. The disparities, even including incentive pay, are even greater in metropolitan areas including Dallas, Boston, Washington, New York and San Francisco.
A recent study by the Economic Policy Institute found a similar dynamic at the state level. Just one of many recent analyses debunking Republican charges about government workers and their unions, EPI found that "on average, state and local government workers are compensated 3.75% less than workers in the private sector." The report by Labor and Employment Relations Professor Jeffrey Keefe of Rutgers University revealed that public employees are undercompensated compared to similarly skilled private sector counterparts:

The study analyzes workers with similar human capital. It controls for education, experience, hours of work, organizational size, gender, race, ethnicity and disability and finds that, compared to workers in the private sector, state government employees are undercompensated by 7.55% and local government employees are undercompensated by 1.84%. The study also finds that the benefits that state and local government workers receive do not offset the lower wages they are paid.
The public/private earnings differential is greatest for doctors, lawyers and professional employees, the study finds. High school-educated public workers, on the other hand, are more highly compensated than private sector employees, because the public sector sets a floor on compensation. The earnings floor has collapsed in the private sector.

And compensation for state and local public employees is worst among the usual suspects. As the New York Times documented two weeks ago, state workers without a college degree generally make more than their private sector counterparts ($34,000 versus $32,000, or a 6.3% gap), while college graduates make much less (a -19.9% gap). But in the reddest of states, public employees experience a pay deficit regardless of education level. In Mississippi, the pay penalty for state workers without a college degree is 11.9%; for college graduates the deficit is 16.9%.

(Click here to see full size image.)
As it turns out, the U.S. poverty rate began its climb and average household income its decline before the onset of Bush recession in late 2007. In September, David Cay Johnston lamented:

Average taxpayer income was down $3,512, or 5.7 percent, in 2008 compared with 2000, President Bush's own benchmark year for his promises of prosperity through tax cuts.
Had incomes stayed at 2000 levels, the average taxpayer would have earned almost $21,000 more over those eight years. That's almost $50 per week.

But as a new EPI study asked three weeks ago, "Why did the richest 1% of Americans receive 56% of all the income growth between 1989 and 2007, before the recession began (compared with 16% going to the bottom 90% of households)?" Certainly, those "takers" and "parasites" of right-wing lore had nothing to do with it:

U.S. productivity grew by 62.5% from 1989 to 2010, far more than real hourly wages for both private-sector and state/local government workers, which grew 12% in the same period. Real hourly compensation grew a bit more (20.5% for state/local workers and 17.9% for private-sector workers) but still lagged far behind productivity growth.
Wage stagnation has hit high school-educated workers harder than college graduates, although both groups have suffered--and a bit more so in the public sector. For example, from 1989 to 2010, real wages for high school-educated workers in the private sector grew by just 4.8%, compared with 2.6% in state government. During the same period, real wages for college graduates in the private sector grew 19.4%, compared with 9.5% in state government.
The typical worker has had stagnating wages for a long time, despite enjoying some wage growth during the economic recovery of the late 1990s. While productivity grew 80% between 1979 and 2009, the hourly wage of the median worker grew by only 10.1%, with all of this wage growth occurring from 1996 to 2002, reflecting the strong economic recovery of the late 1990s.

Those productivity gain produced rewards for someone, just not American workers public or private.

Meanwhile, the Republican response is a race to the bottom. In Florida, Michigan and elsewhere, Republican governors have slashed corporate taxes in the quixotic quest to lure companies away from their neighbors. Vilifying government employees at all levels, GOP leaders in Washington and in the states are pushing to end collective bargaining rights for both public and private sector workers alike. Beggar thy neighbor, Stephen Moore insists, especially if he or she works for government. And what better way than privatizing their jobs:

Most reasonable steps to restrain public-sector employment costs are smothered by the unions. Study after study has shown that states and cities could shave 20% to 40% off the cost of many services--fire fighting, public transportation, garbage collection, administrative functions, even prison operations--through competitive contracting to private providers. But unions have blocked many of those efforts. Public employees maintain that they are underpaid relative to equally qualified private-sector workers, yet they are deathly afraid of competitive bidding for government services.

Predictably, Moore's studies remain unnamed. Of course, the horror stories of privatization run amok - whether Blackwater, Halliburton, Scott Walker's out-sourced county security service or "cash for kids" corporate prisons - are too numerous to document.
Ultimately, the conservative crusade against public employees has nothing to do with recession-ravaged state budgets and everything to do with fatally wounding a Democratic constituency. But to distract from their push more tax cut windfalls for the wealthy at a time of record income inequality, Republicans are trying to get Americans to turn on their neighbors who work for government. But beware: when you beggar thy neighbor, you beggar thyself.