Blue States Will Rescue America from the Fiscal Cliff

In Washington and on Wall Street, there is growing optimism in the wake of President Obama's White House meeting with Congressional leaders Friday that the U.S. will avoid the so-called "fiscal cliff." After their drubbing on Election Day, Republicans are walking back their scorched-earth opposition to new tax revenue to reduce the national debt. But whether a deal ultimately adopts President Obama's proposal to end the Bush tax cuts for the two percent of households earning over $250,000 a year, endorses Republican calls to "broaden the base" by limiting tax deductions, or some combination of the two, one thing is certain. Blue state taxpayers will foot much of the bill.
As we'll see in detail below, that result isn't very surprising. After all, blue states generally are wealthier, and are home to larger numbers of those who would be impacted by the Democrats' proposed return to the Clinton-era tax rates for upper-income earners. But largely overlooked is the fact that blue staters will likely be hardest hit by curbing or eliminating many current tax breaks, the path advocated by the GOP.

As the Wall Street Journal explained on Sunday:

Limiting personal income-tax deductions and other federal tax breaks, an idea gaining momentum as part of a fix for America's budget crisis, would hit some parts of the country harder than others, with a series of high-income blue states leading the way...
After California, the highest average itemized deductions--all over $28,000--were claimed by taxpayers in New York, the District of Columbia, Connecticut, New Jersey, Maryland and Massachusetts. All have high state, local and property taxes, which may be deducted from income on federal returns, although other tax provisions already limit some deductions.

As the WSJ's interactive table shows, of the 10 states with the highest percentage of taxpayers itemizing deductions, 9 voted for Barack Obama for President. Only one of the bottom 10 (Florida) supported the Obama. The same is true for the percentage of households claiming the mortgage interest deduction. When it comes to the average dollar value of their home mortgage deductions, state and local income tax deductions and overall itemized deductions, blue states dominate. Only in the dollar value of their charitable deductions do red states top the table. (It is worth noting that charitable giving also reverts to form if contributions to churches and other religious institutions are not included.)
With their greater wealth, higher state and local taxes and steeper housing costs, blue state residents stand to lose more than their red state brethren by most base-broadening proposals. But that will also be true if President Obama gets his way with the expiring upper-income Bush tax cuts.
The conservative Daily Caller crowed about this point last year. Tucker Carlson's rag responded to a call by some Democrats for a millionaires' surtax by rightly noting it "would hit Democratic states hardest."

Analyses by the Tax Foundation in August found much the same thing. Looking at the potential expiration of the Bush tax cuts for all Americans (and not just the wealthy), the New York Post warned its readers that "New York, Blue States get hit with biggest hikes if Bush tax cuts expire."
As CNBC explained:

Connecticut residents would get rocked the worst, with an additional cost of $5,783 a year while New Yorkers would get hit $5,542 on average, the study from the nonpartisan Tax Foundation states...New Jersey residents would take the third-highest hit at $5,030, with Massachusetts ($4,277) fourth and California ($4,242) fifth. On the other side, states least hit, besides Mississippi, are New Mexico ($1,465) 49th, Alabama ($1,496) 48th, Tennessee ($1,522) 47th, and West Virginia ($1,530) 46th.
Interestingly, the most-hit states are generally considered Democratic strongholds, while the least-hit are mostly Republican. 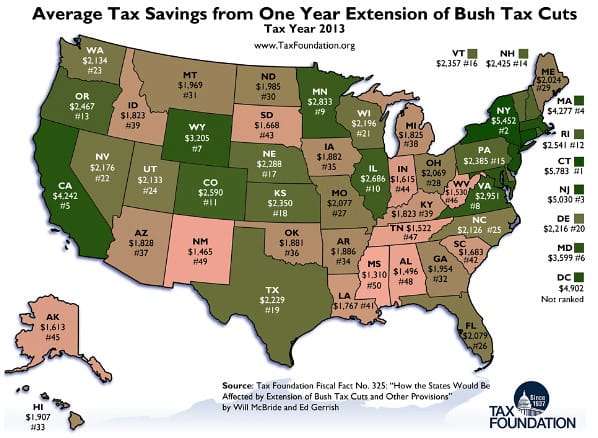 Of course, this dynamic of "red state socialism" by which federal tax dollars generally flow from wealthier Democratic states to less well-off Republican ones is nothing new. Red state spending on education, unemployment insurance and (more than ever) health care has been and will continue to be underwritten by blue state taxpayers. (For more background, see "In Defense of Red State Socialism.") As Jonathan Cohn described it in the New Republic ("Blue States are from Scandinavia, Red States are from Guatemala") :

In blue America, state government costs more--and it spends more to ensure that everybody can pay for basic necessities such as food, housing, and health care. It invests more heavily in the long-term welfare of its population, with better-funded public schools, subsidized day care, and support for people with disabilities...
In the red states, government is cheaper, which means the people who live there pay lower taxes. But they also get a lot less in return. The unemployment checks run out more quickly and the schools generally aren't as good. Assistance with health care, child care, and housing is skimpier, if it exists at all. The result of this divergence is that one half of the country looks more and more like Scandinavia, while the other increasingly resembles a social Darwinist's paradise.

That's why averting the wrongly named fiscal cliff through draconian spending cuts alone would be so devastating to what Dana Milbank termed "the Confederacy of Takers." It's also one more reason the end-of-year austerity crisis must be avoided in part by ending tax cuts for the richest Americans. And whether that means higher rates, fewer deductions or both, it will be Blue State Americans disproportionately picking up the tab.