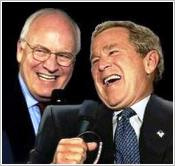 In the aftermath of Barack Obama's reelection victory, voices across the political spectrum were quick to deny that the President had earned a mandate from voters. In the Washington Post, Ruth Marcus warned that a Democratic claim to a mandate was a "delusion." The National Journal's Ron Fournier agreed, adding that the absence of a mandate was "thanks in part to his own small-bore and brutish campaign."
Regardless, when it comes to the issue of increasing taxes for the wealthiest Americans, President Obama has very a strong case in asserting he's earned voters' blessing to proceed. After all, that key pillar of his "balanced approach" to deficit reduction wasn't merely a centerpiece of both his 2008 and 2012 campaigns. Ending the Bush tax cuts for those earning over $250,000 enjoyed majority support on Election Day, just as it has since before Obama vanquished John McCain four years ago. And as it turns out, President Obama can point to George W. Bush and Dick Cheney, who after the disputed 2000 election claimed a mandate to bulldoze their $1.3 trillion package of tax cuts through Congress.
After he dispatched John Kerry in 2004 by a smaller margin (286 electoral votes to 262, 51 to 48 percent popular vote edge) than Obama compiled on Tuesday, President Bush nevertheless boasted that "I earned capital in the campaign, political capital, and now I intend to spend it." (That capital investment in his wildly unpopular Social Security privatization scheme came to nothing in 2005.) But within days of their anointing by the Supreme Court four years earlier, President-Elect Bush and Vice President-Elect Cheney claimed a mandate just the same.
Following the disputed 2000 election, the Bush-Cheney transition team prepared to assume the White House without either a popular vote mandate or dominant majorities in Congress. But while the mainstream media consensus concluded that a "weakened" President Bush would have to govern from the center and "build bridges to the opposition," Dick Cheney had a different idea.
As Barton Gellman details in his book, Angler: The Cheney Vice Presidency, Dick Cheney made it abundantly clear that the Bush administration would put pedal to the metal in pursuit of its radical agenda. In a series of media appearances that December, Cheney proceeded as if the Florida recount and Bush v. Gore had never happened.
His December 3, 2000 exchange with the late Tim Russert on Meet the Press is particularly telling:

RUSSERT: Governor Bush and you campaigned on a platform of a $1.3 trillion tax cut. Now that the Senate is 50-50, Democrats-Republicans, and the Republicans control the House by eight or nine votes, won't you have to scale down your tax cut in order to pass it? [...] But, in reality, with a 50-50 Senate and a close, close, small majority in the House, you're going to have to have a moderate, mainstream, centrist governance, aren't you?
CHENEY: Oh, I think so. [...] But I think there's no reason in the world why we can't do exactly what Governor Bush campaigned on.

Two weeks later, following the controversial Supreme Court decision which made George W. Bush the 43rd President, Cheney made his case even more forcefully on Face the Nation:

"As President-elect Bush has made very clear, he ran on a particular platform that was very carefully developed. It's his program, it's his agenda, and we have no intention at all of backing off of it. It's why we got elected.
So we're going to aggressively pursue tax changes, tax reform, tax cuts, because it's important to do so. [...] The suggestion that somehow, because this was a close election, we should fundamentally change our beliefs, I just think is silly."

When Gloria Borger interrupted to object that "with all due respect, the Democrats are saying that this administration cannot proceed as the Reagan administration did, for example, with a large tax bill, because you don't have the mandate that Ronald Reagan had," Cheney fired back:

"There is no reason in the world, and I simply don't buy the notion, that somehow we come to office now as a, quote, 'weakened president.' [...] We've got a good program, and we're going to pursue it."

Which is pretty much what transpired. By the summer of 2001, President Bush and Vice President Cheney had their $1.3 trillion tax cut, courtesy of precisely the strategy Borger ridiculed as "cherry pick[ing] one or two Democrats here and there and get them to sign on to whatever tax bill you have." (They had to use the budget reconciliation process to do it, which is one of the reasons the Bush tax cuts were not permanent.) Unlike Bill Clinton's upper-income tax hikes of 1993 (which received zero GOP votes in either house of Congress) and Barack Obama's 2009 stimulus bill (which garnered three Republican votes in the Senate and none in the House), 12 Democratic Senators and 28 Representatives provided President Bush's margin of victory.

"I think all four standing here understand that I campaigned on a clear view of tax relief, and that's what I'm going to bring to the floor of the House and the Senate."

And referring to the "head-knocking" and "arm-twisting" required to succeed in passing his proposed tax cuts, President Bush joked to the media in ways President Obama never would--or could:

"I told all four that there are going to be some times where we don't agree with each other, but that's OK. If this were a dictatorship, it would be a heck of a lot easier, just so long as I'm the dictator."