On Sunday, Senator Lindsay Graham (R-SC) showed once again that President Bush, John McCain and their conservative amen corner can't tell the players in Iraq even with a scorecard. Even as Graham proclaimed of the fighting in Basra, "the militias that we are fighting are backed by Iran," President Bush and Vice President Bush continue to embrace the largest Iranian-backed political force in Iraq, the Supreme Islamic Iraqi Council led by Abdul Aziz al-Hakim.
Just days after John McCain erroneously spoke of an Al Qaeda/Iranian alliance for the fourth in a month, Lindsay Graham had this to say about the U.S.-backed Iraqi government offensive in Basra against the Mahdi Army of Shiite cleric Moqtada Al-Sadr:

"Now we have a battle with militias who are operating outside the government...We must win this fight. The militias that we are fighting are backed by Iran. So this is an effort by Iran to destabilize Iraq."

Sadly for Graham, and Democrat Jack Reed quickly pointed out, Iran has been providing arms, training and logistical assistance to all three of the Shiite factions fighting for control of southern Iraq.

"The Iranians have close associations with all the Shia communities, not only with Sadr but also Hakim...The notion that this is fight by American allies against Iranian-inspired elements is not accurate."

Truer words were never spoken. After all, in December 2006, Abdul Aziz al-Hakim warmly received by President Bush at the White House. And just days ago, Vice President Cheney met with Hakim at his compound in Baghdad.
As ThinkProgress detailed this morning, Hakim is not only an ally of Iraqi Prime Minister Nouri-al Maliki. His SIIC and affiliated Badr Brigades militia is one of the largest beneficiaries of Iranian largesse in Iraq:

Ray Takeyh of the Council on Foreign Relations noted the ISCI "was essentially created by Iran, and its militia, the Badr Brigade, was trained and equipped by the Revolutionary Guards" - which the Bush administration calls a "terrorist" organization.
Journalist Gareth Porter added the Badr militia is the "most pro-Iranian political-military forces in Iraq." In fact, ISCI leader Abdul Aziz al-Hakim "met with [Iranian Revolutionary Guard] officers to be his guests in December 2006, apparently to discuss military assistance to the Badr Organization."

That same December, Hakim had another meeting with one of his highest-profile supporters, George W. Bush. In the White House, Bush praised the SIIC leader's role in Iraq:

"I appreciate so very much His Eminence's commitment to a unity government. I assured him the United States supports his work and the work of the Prime Minister to unify the country. Part of unifying Iraq is for the elected leaders and society leaders to reject the extremists that are trying to stop the advance of this young democracy. I appreciated very much His Eminence's strong position against the murder of innocent life." 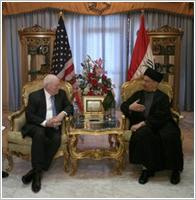 Dick Cheney, too, has been quick to publicly support the man whose Iranian-backed Badr forces were part of the three-way internecine Shiite struggle in Basra. Just days ago during his last visit to Iraq, Cheney met with the Iranian ally at Hakim's compound in Baghdad. While an obviously pleased Hakim announced "our views regarding the strategic agreements are identical," Cheney pronounced:

"We appreciate the important role that Sayyed Hakim has played in that effort, together with Iraq's other leaders, and we look forward to continuing to build on the partnership between our two countries."