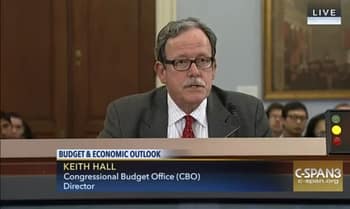 It's not often that the nonpartisan Congressional Budget Office (CBO) is a trending topic on Twitter. But with Director Keith Hall's budget scorekeeper about to weigh in on the coverage, cost and deficit impacts of the Republicans' so-called "replacement" of the Affordable Care Act, all eyes are on the CBO. And given its consistent record of forecasting that Obamacare will enable health insurance coverage for millions of Americans while reducing the national debt, it's no wonder Hall's team is being accused by the GOP of producing "lies" and "budget gimmickry" which is "meaningless."
But there's another reason the Trump administration and its GOP allies should worry about the CBO boss Congressional Republicans themselves selected. As it turns out, Keith Hall long ago debunked their myth-making about the Obama administration cooking up bogus jobs numbers.
Continue reading at Daily Kos.