Cheney Should Smile as Obama Tells GOP , "I Won" 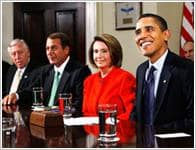 Staying true to his commitment of bipartisanship, President Obama today hosted Congressional Republican leaders to discuss his proposed $825 billion economic recovery package. But while Obama listened to the GOP team air both its grievances and its alternative proposals, the President also gently reminded his Republican guests, "I won." And as Congress considers the Obama stimulus program, that's a message the Republicans should remember well from Dick Cheney eight years ago.
As Politico detailed, Obama summed up the economic crisis by proclaiming, "This is a grave situation facing the country" and heard John Boehner (R-OH) and Eric Cantor (R-VA) pitch their warmed over Republican soup of tax cuts. Ultimately, though, President Obama reminded the GOP leadership that American voters already made their choice in which approach to take to economic recovery:

President Obama listened to Republican gripes about his stimulus package during a meeting with congressional leaders Friday morning - but he also left no doubt about who's in charge of these negotiations. "I won," Obama noted matter-of-factly, according to sources familiar with the conversation.

Given the history of the tax cuts crammed through Congress by the newly minted President Bush and Vice President Cheney in 2001, Capitol Hill Republicans have no grounds for complaint.
Following the disputed 2000 election, the Bush-Cheney transition team prepared to assume the White House without either a popular vote mandate or dominant majorities in Congress. But while the mainstream media consensus concluded that a "weakened" President Bush would have to govern from the center and "build bridges to the opposition," Dick Cheney had a different idea. Especially when it came to the Republican ticket's radical plan of tax cuts for the economy, Cheney insisted:

"We don't negotiate with ourselves."

As Barton Gellman details in his book, Angler: The Cheney Vice Presidency, Dick Cheney made it abundantly clear that the Bush administration would put pedal to the metal in pursuit of its radical agenda. In a series of media appearances that December, Cheney proceeded as if the Florida recount and Bush v. Gore had never happened.
His December 3, 2000 exchange with the late Tim Russert on Meet the Press is particularly telling:

RUSSERT: Governor Bush and you campaigned on a platform of a $1.3 trillion tax cut. Now that the Senate is 50-50, Democrats-Republicans, and the Republicans control the House by eight or nine votes, won't you have to scale down your tax cut in order to pass it? [...] But, in reality, with a 50-50 Senate and a close, close, small majority in the House, you're going to have to have a moderate, mainstream, centrist governance, aren't you?
CHENEY: Oh, I think so. [...] But I think there's no reason in the world why we can't do exactly what Governor Bush campaigned on.

Two weeks later, following the controversial Supreme Court decision which made George W. Bush the 43rd President, Cheney made his case even more forcefully on Face the Nation:

"As President-elect Bush has made very clear, he ran on a particular platform that was very carefully developed. It's his program, it's his agenda, and we have no intention at all of backing off of it. It's why we got elected.
So we're going to aggressively pursue tax changes, tax reform, tax cuts, because it's important to do so. [...] The suggestion that somehow, because this was a close election, we should fundamentally change our beliefs, I just think is silly."

When Gloria Borger interrupted to object that "with all due respect, the Democrats are saying that this administration cannot proceed as the Reagan administration did, for example, with a large tax bill, because you don't have the mandate that a Ronald Reagan.," Cheney fired back:

"There is no reason in the world, and I simply don't buy the notion, that somehow we come to office now as a, quote, 'weakened president.' [...] We've got a good program, and we're going to pursue it."

Which is exactly what transpired. By April 2001, President Bush and Vice President Cheney had their $1.2 trillion tax cut, courtesy of precisely the strategy Borger ridiculed as " cherry pick[ing] one or two Democrats here and there and get them to sign on to whatever tax bill you have."
As we fast forward eight years to today's meeting, it's clear House and Senate Republicans have conveniently forgotten the history of the Bush/Cheney economic package. Arizona Senator John Kyl raised President Obama's ire when he raised the prospect of tax credits to be received by Americans who pay no income taxes. (This tired GOP fraud from the campaign selectively ignores the payroll taxes virtually all Americans pay, as well as the Earned Income Tax Credit Ronald Reagan himself once proclaimed "the best anti-poverty, the best pro-family, the best job creation measure to come out of Congress.") It was that exchange which prompted Obama to respond, "I won."
While House speaker Nancy Pelosi noted that many tax proposals "were made by the Republicans already" and "their provisions are in the legislation," the #2 House Republican Eric Cantor groused, "There are some philosophical questions that may not be able to be resolved."
Which, of course, isn't right. The American people voted for the philosophy reflected in Barack Obama's tax package. And, as even Dick Cheney should acknowledge, he won.

8 comments on “Cheney Should Smile as Obama Tells GOP , "I Won"”