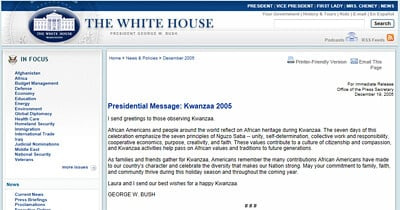 Remember when conservatives raged after President George W. Bush issued messages marking the celebration of Kwanzaa each and every year he was in the White House? Neither do they. That's why the right-wing blogosphere is apoplectic that Barack Obama followed Bush's lead in recognizing a holiday many African-Americans celebrate each year.
As he did in 2009 and 2010, Andrew Malcolm made sure his readers knew that President Obama and the First Lady issued an official White House statement marking Kwanzaa. Tammy Bruce quickly retweeted a message declaring, "Obama celebrates Kwanzaa...Idiots," adding, "Oh freaking brother." The always execrable Weazel Zippers fumed:

Just because Kwanzaa was made up by a racist black nationalist who was convicted of torturing two women who were part of his group "United Slaves," because he thought they were hiding nonexistent "crystals" of poison meant to kill him doesn't mean it's not a legitimate holiday, right? Or how about the fact that actual Africans have never heard of Kwanzaa? I could go on and on but I'm preaching to the choir.

Sadly for the foaming-at-the-mouth right-wingers, that choir did not include President George W. Bush.
Had they simply followed Dubya's practice of "clicking around" the "Internets," they would have discovered that President Bush issued official Kwanzaa statements in 2001, 2002, 2003, 2004, 2005, 2006, 2007 and 2008. For example, on December 20, 2002, President Bush offered this Kwanzaa greeting to the American people:

I send greetings to those celebrating Kwanzaa.

Kwanzaa celebrates the traditional African values of unity, self-determination, collective work and responsibility, cooperative economics, purpose, creativity, and faith. From December 26th to January 1st, people of African descent gather to renew their commitment to these seven principles, known as Nguzo Saba, and give thanks for the blessings of family, community, and culture. Kwanzaa is also a time for Africans and African-Americans to honor their common heritage by participating in events based on early harvest gatherings called matunda ya kwanza, or first fruits.

As individuals and families join together during Kwanzaa, their joy enriches communities in the United States and across the globe. By uniting people of diverse backgrounds and beliefs, this holiday promotes mutual understanding and respect. These universal principles inspire us as we work together for a future of freedom, hope, and opportunity for all.

Laura joins me in sending our best wishes for a memorable Kwanzaa, and for peace, happiness, and success in the coming year.

As it turns out, this year's greeting from Barack and Michelle sounds a lot like the ones from George and Laura:

Michelle and I send our warmest wishes to all those celebrating Kwanzaa this holiday season. Today marks the beginning of the week-long celebration honoring African American heritage and culture through the seven principles of Kwanzaa -- unity, self determination, collective work and responsibility, cooperative economics, purpose, creativity, and faith.

We celebrate Kwanzaa at a time when many African Americans and all Americans reflect on our many blessings and memories over the past year and our aspirations for the year to come. And even as there is much to be thankful for, we know that there are still too many Americans going through enormous challenges and trying to make ends meet. But we also know that in the spirit of unity, or Umoja, we can overcome those challenges together.

As families across America and around the world light the red, black, and green candles of the Kinara this week, our family sends our well wishes and blessings for a happy and healthy new year.

If this latest manufactured controversy sounds familiar, it should. After all, conservative culture warriors also burst a collective blood vessel in November when President Obama's 2011 Thanksgiving message failed to include the word "God."
Just like President Bush.
UPDATE: For those who missed it, President Obama and the First Lady used the weekly address on December 24th to deliver their annual Christmas message. Here's the transcript.