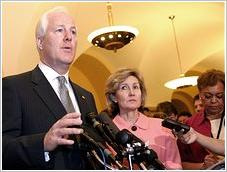 Apparently, judicial activism like beauty is in the eye of the beholder. On Sunday, Texas Senator John Cornyn told Fox News that the impact of the Supreme Court's Citizen United ruling, which erased decades of precedents on corporate political campaign financing, has "been overstated." Given the victory in Massachusetts this week that his National Republican Senatorial Committee (NSRC) helped manufacture, Cornyn is understandably pleased that the hyperactive Roberts Court decided to "open up resources that have not previously been available" to the GOP. Of course, when the case involved Terri Schiavo, an angry John Cornyn threatened American judges with whom he disagreed.
Of course, many of the leading lights in the Republican Party have it made clear that judicial intimidation is now an acceptable part of conservative discourse and political strategy. And Cornyn, himself ironically a former Texas Supreme Court Justice, has been at the forefront of GOP advocacy of violence towards members of the bench whose rulings part ways with conservative orthodoxy.
Back in 2005, Cornyn was one of the GOP standard bearers in the conservative fight against so-called "judicial activism" in the wake of the Republicans' disastrous intervention in the Terri Schiavo affair. On April 4th, Cornyn took to the Senate floor to issue a not-too-thinly veiled threat to judges opposing his reactionary agenda. Just days after the murders of a judge and family members in Chicago and Atlanta, Cornyn offered his endorsement of judicial intimidation:

"I don't know if there is a cause-and-effect connection, but we have seen some recent episodes of courthouse violence in this country...And I wonder whether there may be some connection between the perception in some quarters, on some occasions, where judges are making political decisions yet are unaccountable to the public, that it builds up and builds up and builds up to the point where some people engage in, engage in violence."

(As it turns out, Cornyn was merely echoing the words of the indicted former House Majority Leader and fellow Texan Tom Delay. On March 31st, 2005 Delay thundered in response to the consistent rulings in favor of Michael Schiavo by all federal and state court judges involved, "The time will come for the men responsible for this to answer for their behavior, but not today.")
Facing criticism for his remarks seemingly endorsing right-wing retribution against judges, Cornyn held his ground. "I didn't make the link," he said on Fox News Sunday, adding with a note of sarcasm:

Of course, there was no misinterpreting John Cornyn's glee after the Roberts Court last week handed the Republican Party a landscape-changing windfall in Citizens United v. FEC. Echoing Mitch McConnell's proclamation that "for too long, some in this country have been deprived of full participation in the political process," Cornyn announced:

"I am pleased that the Supreme Court has acted to protect the Constitution's First Amendment rights of free speech and association. These are the bedrock principles that underpin our system of governance and strengthen our democracy.
"This is an encouraging step, and it is my hope that political parties will one day soon be able to speak as freely as other citizen organizations are now permitted."

No doubt, the NRSC Cornyn chairs is looking forward to "speaking" as freely as it did during Scott Brown's upset victory in the Massachusetts Senate race. As McClatchy reported, Cornyn led a massive, if under-the-radar effort to steer resources and funding to Brown:

The Texas Republican had led a stealth operation in the Bay State since December that quietly funneled top staffers, $1 million in cash and campaign knowhow to backstop Republican candidate Scott Brown...
This was something we were playing close to the vest the whole time," Cornyn said in an interview. "We really caught the other side napping."

Of course, there will be nothing quiet or close to the vest for the Republicans and their deep-pocketed corporate allies beginning with this fall's midterm elections. Now, John Cornyn and his ilk aren't threatening judges, but American democracy itself.