Cut and Gut: How Republicans Helped the Rich Raid the U.S. Treasury

And now for today's thought exercise.
Imagine you are a member of Congress. Recent assessments from the nonpartisan Congressional Budget Office (CBO) warn that the budget deficit for fiscal year 2018, which ended on Sept. 30, jumped to $779 billion and annual trillion-dollar shortfalls will return beginning in FY 2020. But then you learn of a miraculous budget formula that magically turns each additional dollar Uncle Sam spends into five or even 10 dollars in new revenue. You further discover that this formula is perfectly legal, completely fool-proof, and 100 percent guaranteed to slash federal budget deficits.

So, do you use it?
If you're a GOP member of Congress, the answer is no. The reason for that mind-bogglingly stupid refusal is no mystery. As it turns out, that "magic formula" is simply to increase the enforcement budget for the Internal Revenue Service (IRS). But that very real solution to cracking down on tax fraud, evasion, and cheating would largely impact the rich. And after spending large parts of the past two decades cutting taxes for the wealthy and gutting the IRS, Republicans aren't about to turn on their donor base: the haves and the have-mores. 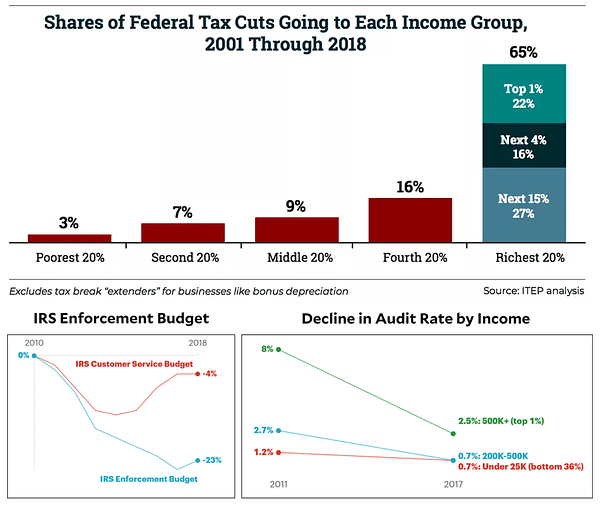 A special report ("How the IRS Was Gutted") jointly produced this week by The Atlantic and ProPublica shed light on the second prong of the GOP's giveaway to the gilded class. "An eight-year campaign to slash the agency's budget has left it understaffed, hamstrung and operating with archaic equipment," authors Paul Kiel and Jesse Eisenger revealed. "The result: billions less to fund the government," they warned, adding "that's good news for corporations and the wealthy."
Continue reading at Daily Kos.