So another tax season has come and gone. In this case, that means Americans can render their verdict on the first year of the signature legislative achievement of Donald Trump and his Republican allies in Congress, the Tax Cuts and Jobs Act of 2017. Thus far, the reviews are not kind. Despite an analysis by the Tax Policy Center showing 64% of Americans have received a tax cut, polling continues to show that voters solidly disapprove of a GOP tax plan they perceive as not having provided them financial relief at all. 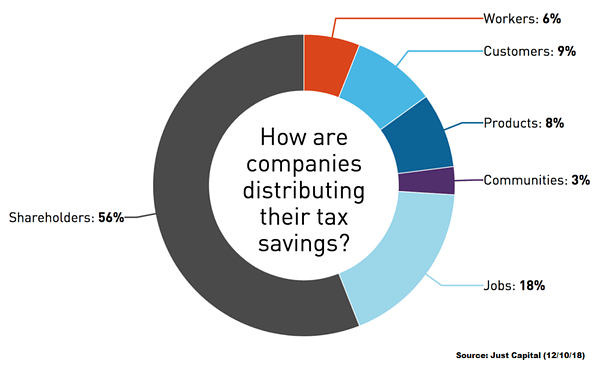 To be sure, that perception is fueled by the fact that most taxpayers realized relatively small benefits, benefits further masked by changes in withholding rules that left many with unexpected checks to write to Uncle Sam. But the bigger problem for Republicans heading into the 2020 elections is one not of perception, but of reality. Simply put, the GOP's best and brightest lied--early, often, and spectacularly--in their effort to sell Americans on what became the TCJA.
For starters, take Senate Majority Leader Mitch McConnell's 2017 promise that the GOP's plan "is going to be a revenue producer." This is just the latest repackaging of the Republicans' uber-myth that "tax cuts pay for themselves," a claim that has never been realized in the 45 years since Arthur Laffer first sketched his infamous curve on a cocktail napkin supposedly showing just that. (Nevertheless, Larry Kudlow, director of Trump's National Economic Council, comically announced in March that "we have virtually paid for" the $1.5 trillion 10-year Treasury-draining tax cut package.) President Trump's boast that his is the "biggest tax cut" in American history isn't just wrong; calculating cuts as a percentage of the U.S. economy, President Obama signed two larger tax-relief packages into law. More laughable, "Mnuchin's Rule"--named for Treasury Secretary Steve Mnuchin's December 2016 proclamation that "there will be no absolute tax cut for the upper classes"--had to be abandoned by its creator in less than a year. Still, Donald Trump never stopped insisting "the rich will not be gaining at all with this plan." To personalize his prevarication, Trump promised voters as far back as 2015 that his tax cut proposals were "going to cost me a fortune."
But among the most disgusting frauds committed by Team Trump to sell his bogus claim that "our focus is on helping the folks who work in the mailrooms and the machine shops of America" was a particularly foul turd of a talking point lovingly polished by Treasury Secretary Mnuchin. This tale concerned the massive reduction in the corporate tax rate from 35% to 21%, a single cut responsible for $1.38 trillion in new red ink over its first decade. Trump's "plumbers, the carpenters, the cops, the teachers, the truck drivers, the pipe fitters ... the people that like me best" would win big, Mnuchin guaranteed in September 2017, because most of the benefits from a corporate tax cut flow to workers:

On Fox News, Mnuchin claimed that "most economists believe that over 70 percent of corporate taxes are paid for by the workers." At an event in Kentucky, he declared that "over 80 percent of business taxes is borne by the worker."

As it has turned out, the best estimate we have for how corporate America spent its $150 billion year 1 windfall from the GOP's Tax Cuts and Jobs Act shows that it didn't plow 70-80% of the proceeds into higher wages and bonuses for its workers. According to Peter Cary and Allan Holmes of the Center for Public Integrity, the actual answer is 6%.
Continue reading at Daily Kos.