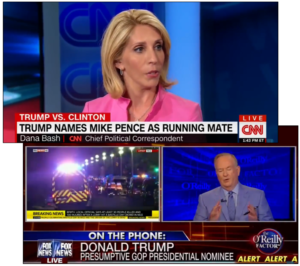 Thursday, July 14, represented Donald Trump's first test as the would-be commander-in-chief of the United States. He failed it badly. Facing the unexpected need to react to the carnage in Nice, France, on the eve of his vice-presidential announcement, Trump stumbled, froze, raged, and ultimately beclowned himself on a global stage. The man who would command America's armed forces couldn't keep a secret, waffled on his decision, and rushed to declare war on an unknown enemy.

Trump's first operation--selecting and announcing a running mate--revealed a complete lack of command, control and communications. After endlessly attacking Hillary Clinton over her email practices, the Trump Army couldn't keep The Donald's evangelically-blessed choice of Indiana Gov. Mike Pence secret for even 24 hours before the planned Friday morning unveiling. When the news leaked before Trump had even formally extended the offer to Pence and his fellow contenders, Trump decided to use the bloodbath in France as a smokescreen for his bungling. As Kelly O'Donnell reported for MSNBC, the supposedly tough-talking, $10 billion man moved his announcement event to Saturday not out of respect for the dead, but out of cowardice.
Continue reading at Daily Kos.