A new Gallup poll last week once again confirmed that Americans are decidedly unimpressed by the GOP's "Tax Cuts and Jobs Act" passed in December. Coming just weeks after a Fox News survey found Obamacare enjoyed greater popularity than the Republican tax cuts, Gallup's latest tally revealed that respondents continue to disapprove of President Trump's signature legislative achievement by a 46 to 39 percent margin.
Those dismal numbers should come as no surprise to anyone. For starters, the wealthiest, stock-holding Americans have pocketed the lion's share of the benefits of the tax cuts. Exactly as predicted, the steep corporate tax reductions have not led to increased business investment or higher wages for workers, but instead fueled an avalanche of stock buybacks and mergers and acquisitions. It's no wonder 51 percent of those surveyed by Gallup reported "the law has not helped their family's financial situation", while 26 percenr say it has helped "a little." Only among families earning over $90,000 a year did the combined percentage stating the tax cuts helped a little (34 percent) or a lot (13 percent) exceed the share (45 percent) responding the TCJA hasn't helped their families at all. (Making matters worse, the Republicans' $10,000 cap on the deductibility of state and local taxes means larger payments to Uncle Sam for residents in high-tax, high-service states like New York, New Jersey, Massachusetts, and California.) Adding insult to injury, the extra economic growth and cash back to working Americans the GOP confidently forecast have not come to pass, while a multi-trillion hemorrhage of red ink from the United States Treasury is already underway--just like Democrats said. 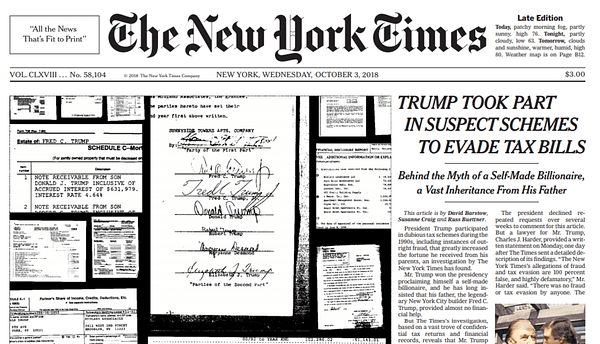 But as Election Day approaches, Americans might find one additional reason to be disgusted with this budget-busting windfall for the wealthy courtesy of Donald Trump, Senate Majority Leader Mitch McConnell, and House Speaker Paul Ryan. As it turns out, the president of the United States lied about almost every aspect of the "Tax Cuts and Jobs Act." The man who in August 2016 promised voters "I will always tell you the truth" lied about the impact of his tax plan on your family--and his. As we learned recently, Trump has grossly misled the American people--and tax authorities in New York City, New York State, and Washington, D.C.--about his financial worth. And as they have once again made clear, Republican leaders by word and by deed have no problem with any of it.
Continue reading at Daily Kos.