Don't Build a Wall; Build This Instead 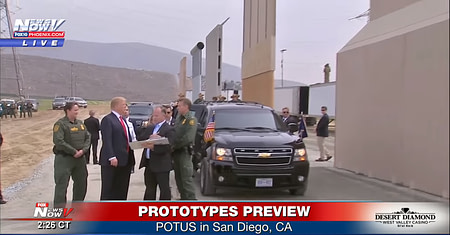 Fearing the prospect of large Democratic gains in Tuesday's midterm elections, Donald Trump has been serving a steaming buffet of hate with something to please everyone in his xenophobic base. Some 3,500 Central American migrants--most of them women and children--trudging through Mexico hundreds of miles from the U.S. have been transformed by the president into "an invasion of our country." In response, Trump, Vice President Mike Pence, and their right-wing echo chamber have regurgitated bogus talking points about an influx of criminals, Middle Eastern terrorists, and baby-depositing women poised to overwhelm our southern border. Always sensitive to the delicate feelings of the white supremacists and anti-Semites among the ranks of his supporters, Trump and Republicans leaders like Sen. Chuck Grassley pointed to the supposedly sinister role of George Soros, the man labeled by the federally-funded Radio and Television Marti as a "multi-millionaire Jew."

In a transparent stunt designed to get his faithful foaming at the mouth, Trump has resurrected his unconstitutional scheme to ban the 14th Amendment's promise of birthright citizenship, this time by executive order. The president has warned he may "declare certain migrants ineligible for asylum because it 'would be contrary to the national interest' and 'detrimental to the interests of the United States." Not content to stop there, the Administration has ordered 5,200 active-duty U.S. troops to the border, with Trump suggesting he may double or triple the number. (Such a force, likely five times the size of the migrant group, would be larger than the total American force currently deployed to fight ISIS in Syria and Iraq.) And as always, Trump has continued to demand funding for his much-hyped yet undelivered border wall, a project the Government Accountability Office warned was certain to exceed price tags ranging from $18 billion to $70 billion.

But as Donald Trump throws the reddest of the red meat to his Republican base, many Americans seem not to realize that he is preparing the United States to once again fight the last war. While families and children fleeing the gang violence, corruption, and economic troubles in Central America are seeking asylum in the U.S. in greater numbers, the early 2000s wave of undocumented immigrants from Mexico has slowed to a comparative trickle. For a fraction of the cost of building Trump's "big, beautiful wall," the American people could provide economic assistance, supply military aid and training, fund anti-corruption projects, and deploy U.S.-led multinational forces to raise living standards, crackdown on international gangs, and ensure safety for nations across Central America. Call it the United States Refugee Assistance Program (USRAP).