Dr. Krauthammer Offers GOP a Cure for Its War on Women 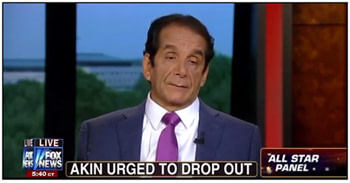 Long before he became America's preeminent conservative columnist, Charles Krauthammer was a practicing physician in Boston. Now, the psychiatrist turned commentator is offering a prescription for his Republican Party suffering from the blowback of its war on women. The antidote to the yawning gender gap expanded by GOP proclamations about "legitimate rape" and other "gifts from God," Dr. Krauthammer announced in the Washington Post on Thursday, is simply to accuse Democrats of infanticide.
In his screed on "How to Debunk the 'War on Women,'" Krauthammer suggested Republicans should be "sticking to policy and forswearing amateur psychology should apply to every so-called women's issue."

Take abortion, which is the subtext of about 90 percent of the alleged "war on women," the charge being that those terrible conservative men are denying women control of their reproductive health.
Yet there is a very simple, straightforward strategy for seizing the high ground on abortion in a way that transcends the normal divisions and commands wide popular support: Focus on the horror of late-term abortion -- and get it banned.

After putting the Republican patient on the couch, Dr. Krauthammer's therapy calls for pushing a 20 week abortion ban. After all, he argues, voters still recall the image of Dr. Kermit Gosnell. And as the successful GOP campaign in 2003 to ban the rare but medically necessary "partial birth abortion" procedure shows, Republicans can demonize opponents of 20 week laws as supporters of infanticide:

How else to describe crushing the infant's skull in mid-delivery before the head leaves the birth canal?...
Here we are dealing with a child that could potentially live on its own -- if not killed first. And killing it, for any reason other than to save the mother's life, is an abomination. Outlawing that -- state by state and nationally, as was done with partial birth abortion in 2003 -- should be the focus of any Republican's position on abortion...
Stay away from the minefield of gender politics. Challenge the other side on substance. And watch them lose.

Unfortunately, Dr. Krauthammer has misdiagnosed his patient's condition. Abortion is not "the subtext of about 90 percent of the alleged 'war on women.'" Instead, conservative stands on a broad constellation of issues--equal pay, protection from workplace discrimination, access to reproductive and other health services--are alienating American women, especially the unmarried. The right-wing jihad against Planned Parenthood, which provides millions of women with pap smears, breast cancer screenings and access to contraception, is just a comically pathetic smokescreen. (Texas learned that the hard way when it tried to slash $73 million in taxpayer funding for Planned Parenthood, only to discover that caring for 23,760 more babies resulting from reduced access to state-subsidized birth control would cost the Lone Star State almost four times as much.)
When it comes to women's reproductive rights, the party that claims to protect "the doctor-patient relationship" is instead mandating medical malpractice. In many states, doctors must perform unneeded, unwanted and invasive ultrasounds in facilities which now require the same capabilities as full hospitals. And while physicians are legally protected when they refuse to inform patients about possible birth defects, they must warn women about "fetal pain" and mythical links to breast cancer and so-called "post-abortion syndrome." While doctors' free speech rights are curtailed, patients are deceived, duped and defrauded.
(Dr. Krauthammer's own fraud extends to Texas gubernatorial candidate Wendy Davis. He charged that the "major feature" of the draconian legislation Davis famously filibustered was "outlawing abortions beyond 20 weeks." But the much broader HB2 included new clinic requirements and physician admitting privileges that would shutter 90 percent of the facilities in the state.)
Of course, Republicans have long since given the game away. During a 2008 presidential debate with Barack Obama, John McCain used "air quotes" to mock "the health of the mother" and with it, American women:

"Just again, the example of the eloquence of Sen. Obama. He's [for] health for the mother. You know, that's been stretched by the pro-abortion movement in America to mean almost anything. That's the extreme pro-abortion position, quote, 'health.'"

McCain was just following the footsteps of Paul Ryan. In an April 2000 debate on the House floor, Congressman Ryan took exception to proposals to include a "health of the mother exception" to a partial birth abortion bill:

Back in 2009, Charles Krauthammer marked 25 years in punditry by recalling "an intern at the New Republic asked me how to become a nationally syndicated columnist. 'Well,' I replied, 'first you go to medical school.'" And then forget your oath to "do no harm."