With the year-end expiration of the Bush tax cuts and the looming "sequestration" of $1.2 trillion they agreed to during their debt ceiling hostage-taking last summer, the message from Republican leaders is the same as it ever was. Taxes (especially for the rich) must not go up, defense spending must not go down, and the increasing national debt is all Barack Obama's fault.
The coming "fiscal cliff" brought Dick Cheney, the same man who as Vice President boasted that "Reagan proved deficits don't matter," back to Washington this week to get Congressional Republicans "ginned up" to prevent the $600 billion Pentagon sequester. Meanwhile, the GOP leadership team of Mitch McConnell (R-KY), Jon Kyl (R-AZ), John Boehner (R-OH) and Eric Cantor (R-VA) sent a letter to President Obama to demand a replacement for the defense cuts, one which of course must not include "tax increase proposals that face bipartisan congressional opposition." And on the campaign trail, would-be Romney running mate and former Bush OMB chief Rob Portman (R-OH) warned that "we're going broke."
Of course, the United States is not going broke. But thanks to the Bush tax cuts and the wars in Iraq and Afghanistan, by 2020 the U.S. Treasury will be roughly $10 trillion poorer than it would have been. And these guys supported all of it. 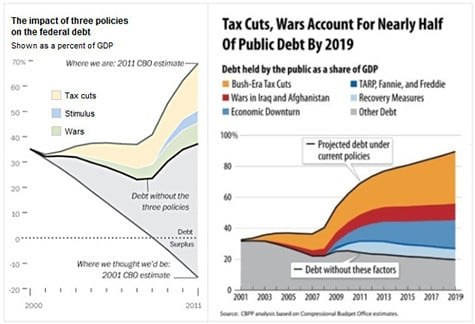 As you'll recall, George W. Bush entered the White House having inherited a balanced budget and CBO forecast of a $5.6 trillion surplus over 10 years. Noting that "'the federal budget will have the second largest surplus in history," President Bush moved forward with the massive tax cuts of 2001. But even as the World Trade Center site was still smoldering, Bush in the wake of the September 11 attacks told the American people not to sacrifice but to go shopping and "get down to Disney World." And in 2003, George W. Bush became the first modern president to cut taxes during wartime. (It should be noted that Barack Obama became the second.)
And so, the fiscal hemorrhaging began. The wars in Iraq and Afghanistan, the Medicare prescription drug program and, most of all, the Bush tax cuts of 2001 and 2003 rapidly drained Uncle Sam's coffers. Mitch McConnell, John Boehner and Eric Cantor voted for all of it. And along with large majorities of the Republicans in the House and Senate, they voted seven times during Bush's tenure to raise the debt ceiling as well.
For his part, President Bush promised that "you cut taxes and the tax revenues increase." As it turned out, not so much. In words and pictures, the New York Times told the tale a year ago:

As the Washington Post summed up the CBO's conclusions regarding the causes of the nation's mounting debt earlier this year, "The biggest culprit, by far, has been an erosion of tax revenue triggered largely by two recessions and multiple rounds of tax cuts." The analysis by the Times echoed that finding:

With President Obama and Republican leaders calling for cutting the budget by trillions over the next 10 years, it is worth asking how we got here -- from healthy surpluses at the end of the Clinton era, and the promise of future surpluses, to nine straight years of deficits, including the $1.3 trillion shortfall in 2010. The answer is largely the Bush-era tax cuts, war spending in Iraq and Afghanistan, and recessions.

But as Ezra Klein explained in the Washington Post, the revealing Times chart doesn't tell the full story of the impact of Bush-era policies on future debt facing Barack Obama:

What's also important, but not evident, on this chart is that Obama's major expenses were temporary -- the stimulus is over now -- while Bush's were, effectively, recurring. The Bush tax cuts didn't just lower revenue for 10 years. It's clear now that they lowered it indefinitely, which means this chart is understating their true cost. Similarly, the Medicare drug benefit is costing money on perpetuity, not just for two or three years. And Boehner, Ryan and others voted for these laws and, in some cases, helped to craft and pass them.

The two graphs at the top from the Washington Post and the Center on Budget and Policy Priorities make that point crystal clear. Analyses by CBPP in 2011 showed that the Bush tax cuts accounted for half of the deficits during his tenure, and if made permanent, over the next decade would cost the U.S. Treasury more than Iraq, Afghanistan, the recession, TARP and the stimulus - combined.
By 2010, a decade of the Bush tax cuts cost the federal government roughly $2.5 trillion. If made permanent, as Republicans demand, the lost revenue would amount to another $4 trillion over the next 10 years. And a time of the lowest federal tax rates in 30 years and smallest total tax burden as a percentage of the U.S. economy in 60, Republicans like Mitt Romney and Paul Ryan would cut taxes further still.
Reflecting on Republican fiscal mismanagement during the Bush years, Utah Senator Orrin Hatch was surely telling the truth in 2009 when he acknowledged, "It was standard practice not to pay for things." And in no area was this was more true than when it came to paying for America's wars.
In May 2011, the National Journal estimated that the total cost to the U.S. economy of the war against Al Qaeda will reach $3 trillion. In 2008, Nobel Prize-winning economist Joseph Stiglitz put the price of the Iraq conflict alone at $3 trillion.
But by 2020 and beyond, the direct cost to U.S. taxpayers could reach $3 trillion. In March 2011, the Congressional Research Service put the total cost of the wars at $1.28 trillion, including $806 billion for Iraq and $444 billion for Afghanistan. For the 2012 fiscal year which began on October 1, President Obama asked for $117 billion more. (That war-fighting funding is over and above then Secretary Gates' $553 billion Pentagon budget request for the year.)
But in addition to the roughly $1.5 trillion tally for both conflicts through the theoretical 2014 American draw down date in Afghanistan, the U.S. faces staggering bills for veterans' health care and disability benefits. Last May, an analysis by the Center for American Progress estimated the total projected total cost of Iraq and Afghanistan veterans' health care and disability could reach between $422 billion to $717 billion. Reconstruction aid and other development assistance represent tens of billions more, as does the additional interest on the national debt. And none of the above counts the expanded funding for the new Department of Homeland Security.
But that two-plus trillion dollar tab doesn't account for the expansion of the United States military since the start of the "global war on terror."

As a percentage of the American economy, defense spending jumped from 3.1% in 2001 to 4.8% by 2010. While ThinkProgress noted that the Pentagon's FY 2012 ask was "the largest request ever since World War II," McClatchy explained last year:

All in all, Americans are on the hook for about $3 trillion to the U.S. Treasury by 2020 and $4.1 trillion by 2030, according to an analysis by the American Prospect. But if the GOP gets its way, we won't have to pay it back. Not now. Not ever.
Recently, the nonpartisan Congressional Budget Office examined the impact on defense spending over the next decade of President Obama's proposed $500 billion reduction in Defense Department funding as well as the $600 billion sequestration agreed to by Congressional Republicans. It found that "Even with that cut, however, DoD's base budget in 2013 would still be larger than it was in 2006 (in 2013 dollars) and larger than the average base budget during the 1980s." As Center for American Progress analyst Lawrence Korb put it:

"Even if the defense budget were reduced by the entire $1 trillion or about $100 billion a year over the next decade, it would amount to a reduction of about 15 percent. This would, in real terms, allow the Pentagon to spend at its 2007 level for the next decade."

Republicans are having none of it. On Friday, the GOP-controlled House approved $607.1 billion in fiscal 2013 for weapons purchases, personnel and war operations in Afghanistan, a figure higher than President Obama's request. Meanwhile, the GOP Congressional leadership is reneging on last year's budget deal, demanding that the defense sequester be paid for with "common sense savings" from already gutted discretionary spending. As for Mitt Romney, the GOP White House hopeful announced Thursday, "I will not cut the military budget."
As it turns out, Mitt Romney's proposed Pentagon budget doesn't pass the giggle test. While gutting the social safety net in order to fund yet another tax cut payday for the gilded-class, Romney wants to expand real U.S. defense spending to its highest level in decades. As the Boston Globe noted, Romney not only fails to realize savings from the end of the U.S. war in Afghanistan, but promises Pentagon increases that simply don't square with his pledge to "Cut, Cap and Balance" the federal budget:

Romney's solution is one of the most far-ranging, expensive, and perhaps least understood of his campaign. He has vowed to commit at least 4 percent of the nation's gross domestic product - $4 out of every $100 in the nation's economy - to "core'' defense spending, not including many war expenses.
Under next year's budget, defense spending is projected to be about 3.2 percent [of GDP] - yet Romney has stuck by his 4 percent vow. Put another way, that means Romney proposes spending 61 percent more than Obama at the end of a decade-long cycle, according to the libertarian Cato Institute.
Enacting such an increase at the same time that Romney wants to slash taxes and balance the budget could cost trillions of dollars and require huge cuts in domestic programs. As Romney's website puts it matter-of-factly, "This will not be a cost-free process.''

But before the GOP's best and brightest like Mitt Romney, Dick Cheney, Mitch McConnell, Paul Ryan and John Boehner ask for more money for the Pentagon and another round of tax cuts, they first have to answer for the unpaid tab they've already run up. To put it another way:
Dude, where's my $10 trillion?
(This piece previously appeared at DailyKos.)