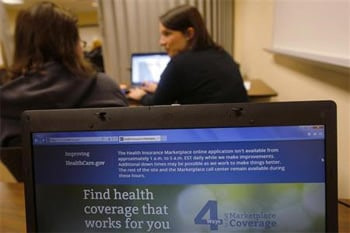 A federal judge in Kansas City issued a preliminary injunction on Thursday blocking Missouri's draconian restrictions on Obamacare "navigators." Following a similar decision which ruled that Republican legislation in Tennessee was far too broad, Judge Ortrie B. Smith declared that "that the State of Missouri was illegally obstructing the activities of insurance counselors appointed by the federal government to inform consumers of their options under the Affordable Care Act."
In August, the federal government awarded $67 million in grants to 105 hospitals, community groups and non-profit organizations to provide outreach, information and insurance enrollment assistance to residents of the 34 states which refused to set up their own health insurance exchanges under the Affordable Care Act. But like many other GOP-dominated states, Missouri erected barriers making the navigators work virtually impossible. Among other roadblocks, the Missouri "Health Insurance Marketplace Innovation Act of 2013" bars navigators from offering "advice concerning the benefits, terms, and features of a particular health plan" and "including licensing tests, fines as high as $1,000 and training that almost doubles the hours required by the government."
That, Judge Smith ruled, is clearly illegal. As the New York Times reported:

"The state law obstructs the federal purpose" by imposing onerous restrictions and requirements on people who help consumers, including groups designated as "navigators" under federal law, the judge said...
Judge Smith said that the plaintiffs had already complied with federal rules for insurance counselors, but that the state had imposed a number of additional licensing requirements.
"It seems obvious these additional requirements obstruct the federal government's operation of the federally facilitated exchange," Judge Smith said. For that reason, he said, the state law is pre-empted by the Affordable Care Act, which has supremacy under the federal Constitution.

In Missouri, the two major recipients were Missouri Alliance of Area Agencies on Aging ($750,000) and Primaris Business Health Care Solutions ($1,045,624). These funds were then subcontracted to a host of regional groups and non-profits whose staff and volunteers provide outreach, customer service and enrollment assistance to Missourians seeking health insurance...
You read that right. The same organizations getting federal dollars to help roll-out the Affordable Care Act in Missouri are the same ones that have been getting millions for years from the State Health Insurance Assistance Program (SHIP). In Missouri, the non-profit SHIP entity running the Medicare outreach program is called "Community Leaders Assisting the Insured of Missouri" or CLAIM. For Medicare counseling and enrollment help, CLAIM contracted to Primaris, which in turn funds partners like the APPLE Project, Interfaith Community Services and Ozark Action, Inc., just to name a few. And all of those Missouri Medicare navigators are Missouri Obamacare navigators as well.

Legal analysts have suggested that Smith's ruling could ultimately impact similar GOP navigator curbs in eight other states, including Florida, Ohio, Texas and Wisconsin. Meanwhile, back in Missouri Republican State Senator Kurt Schaeffer is readying a new bill to obstruct the work of Show Me State Obamacare navigators by requiring them to purchase surety bonds of at least $100,000 to protect clients from improper use of their personal data.