Federal Spending Has Not Increased Under President Obama

It is an article of faith among Republicans that federal spending is "out of control" under President Obama. For the stenographers who seem to make up the bulk of the American media, the image of Obama the "tax and spend liberal" is taken for granted.
Too bad it's not true. As the latest 10-year budget forecast from the nonpartisan Congressional Budget Office (CBO) once again confirms, Uncle Sam has been spending less than the day Barack Obama first took the oath of office. 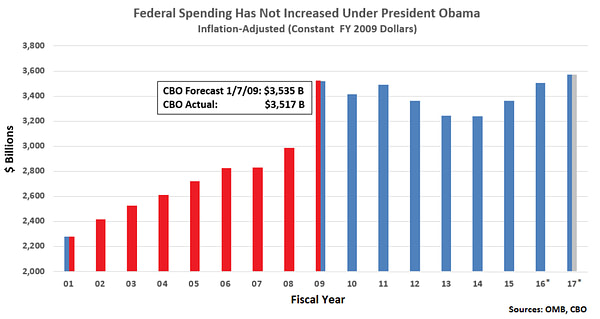 In its latest assessment, CBO predicted fiscal year 2016 spending would rise to $3.91 trillion dollars. In FY 2017 which starts on October 1, spending during President Obama's final days in office will increase to $4.07 trillion. But taking inflation into account by using constant FY 2009 dollars (see OMB historical table 1.3) shows a different picture. At, $3.51 trillion, Inflation-adjusted FY 2016 spending will still be lower than on Barack Obama's first inauguration day. As I noted previously:

On January 7, 2009, CNN reported on the latest long-term budget forecast from the CBO. Two weeks before President Bush ambled out of the Oval Office, CNN explained "the U.S. budget deficit in 2009 is projected to spike to a record $1.2 trillion, or 8.3% of gross domestic product." With the recession in full swing and the massive TARP program passed the previous fall, CBO predicted in January 2009 that federal spending would spike to $3.543 trillion dollars while tax revenue would plummet to an anemic to $2,357 trillion. As it turned out, the final deficit figure for the 2009 fiscal year which ended on September 30, 2009 reached $1.413 trillion because of worse-than-expected tax collections ($2,105 trillion.)

If you're looking for a big spender, look no further than George W. Bush.
As CBO explained, "the budget deficit for 2016 will increase after six years of decline." The culprit behind that jump from $439 billion in red ink for 2015 to $544 billion in 2016?

The 2016 deficit that CBO currently projects is $130 billion higher than the one that the agency projected in August 2015.2 That increase is largely attributable to legislation enacted since August--in particular, the retroactive extension of a number of provisions that reduce corporate and individual income taxes.

Several other points in the CBO data are worth highlighting. At 2.9 percent of GDP, the FY 2016 deficit shows that Washington does not have a near-term spending problem. As a share of the U.S. economy, non-defense discretionary spending (that is, everything outside of Medicare, Medicaid, Social Security, the Pentagon and interest on the national debt) is already at its lowest level in 50 years. As CBO has repeatedly shown, Obamacare reduces the national debt. It is the aging American population in general and Medicare spending in particular (along with a presumption of higher interest rates on the national debt) that causes deficits to begin to increase again starting in FY 2019.
If anything, Barack Obama has been a tax-and-not-spend liberal. After all, stimulus spending largely ended by 2011. Over 40 percent of that $800 billion program was tax cuts. Annual deficits have been slashed by two-thirds during Obama's presidency. The good news is that the higher income and capital gains tax rates on the rich that Obama signed into law in 2013 have refilled the United States Treasury, but as predicted had no negative impact on economic growth and job creation. But as has been documented elsewhere, the recovery from the Great Recession would have been quicker and more robust if the federal government had spent more to offset the "anti-stimulus" of shrinking state and local governments.
All of which is why President Obama isn't a big spender. He is, however, the man who saved the American economy despite the Republicans' all-out effort to kill it.