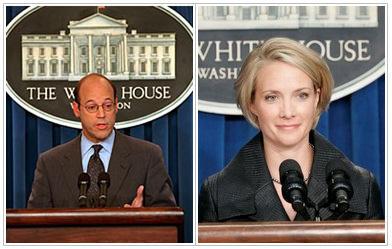 The conservative campaign to brand Barack Obama "Race-Baiter in Chief" over his remarks on the Trayvon Martin tragedy continued uninterrupted over the weekend. Joining ranks with Sean Hannity, who said the young Obama resembled Martin because "he smoked pot and he did a little blow," were former Bush press secretaries Ari Fleischer and Dana Perino. Their statements were more than a little ironic, and not just because they flacked for a man another Bush press secretary confirmed was a reformed drunk and cokehead. As it turns out, when it came to racial issues in America, President George W. Bush got the whole "uniter, not a divider" thing backwards.
Of course, you'd never know that listening to the Bush mouthpieces now gainfully employed by CNN and Fox News. "There's really no commitment, no ongoing follow-up for the president doing anything about urban matters, poverty matters, matters affecting the black community," Fleischer complained on Friday, adding of Obama, "where has the president been, then, for the last five years?" On Sunday, Dana Perino added her voice to the right-wing chorus, explaining that "when a president speaks, it's to multiple audiences."

"If you think of the young mother whose 2-year-old son was shot in the face by the two black teens that approached her in Atlanta and that baby had died, why do presidents choose to speak about one case and not the other? That's why it's better maybe not to talk about any of them."

Back in the summer of 2005, that must have been Ken Mehlman's thought exactly. Then chairman of the Republican National Committee, Mehlman was the point person for the GOP's brief 2005 effort to reach out to African-Americans on President Bush's behalf. But one day after apologizing to the NAACP convention for "trying to benefit politically from racial polarization," Mehlman turned to another controversial case to do just that:

"The NAACP unfortunately in the 2000 campaign likened the president to James Byrd, who was a racist killer in east Texas, who the president brought to justice."

Mehlman had committed a double mistake. Unfortunately, he had confused victim and villain in the dragging death of African-American James Byrd, murdered by white supremacists in Jasper, Texas. Almost as shocking, Mehlman resurrected one of Bush's most embarrassing episodes from the 2000 campaign.
During his second debate against Al Gore in October 2000, Bush was asked about his position on hate crimes laws in the wake of Byrd's killing in his home state of Texas. His disturbing response - accompanied by a sickening grin - produced gasps among the audience:

"The three men who murdered James Byrd, guess what's going to happen to them? They're going to be put to death. A jury found them guilty. It's going to be hard to punish them any worse after they get put to death.
In this case when you murder somebody it's hate, Jim. The crime is hate. And they got the ultimate punishment. I'm not exactly sure how you enhance the penalty any more than the death penalty."

The backlash against Bush's clear satisfaction over the looming executions moved the Republican's campaign into damage control mode. In the third debate, candidate Bush tried to counter the impression of apparent blood lust:

MEMBER OF AUDIENCE: In one of the last debates held, the subject of capital punishment came up, and in your response to the question, you seemed overly joyed and as a matter of fact proud that Texas led the nation in the execution of prisoners. Sir, did I misread your response and are you really, really proud of the fact that Texas is number one in executions?
BUSH: No, I'm not proud of that. The death penalty is a very serious business, Leo. It's an issue that good people obviously disagree on. I take my job seriously. And if you think I was proud of it, I think you misread me, I do.

Of course, there was no misreading President Bush in January 2005, when he tried to sell his Social Security privatization scheme to African-American voters. As he explained to a town hall audience, "African American males die sooner than other males do, which means the system is inherently unfair to a certain group of people." And how would his proposal help those African-American men?

"Another interesting idea...is a personal savings account...which can't be used to bet on the lottery, or a dice game, or the track."

It's no wonder George W. Bush captured only 9 percent of the black vote in 2000 and 11 percent in 2004. African-Americans could be forgiven their low expectations of soft bigotry from the Bush administration and its GOP allies, especially after Hurricane Katrina. Heckuva job, Brownie.
Back in July 2005, President Bush skipped the NAACP convention, addressing the Indiana Black Expo instead. In his place, Mehlman brought Bush's message to the NAACP. "The party of Lincoln," Mehlman said, "will not be whole again, and won't truly reflect the dream of African American political empowerment until we effectively and forthrightly respond to the cause of the African American community." He added:

"It's not healthy for the country for our political parties to be so racially polarized. Just as the Democrats came to this (black) community in 1964 with something real to offer, today we Republicans have something that should cause you to take another look at the party of Lincoln."

Ari Fleischer and Dana Perino might want to take a break from bashing President Obama and figure out what that something is.