Getting Away with Murder: How the GOP Killed Trust in Government

That Americans' trust in government has plummeted to near-record lows isn't a surprise. After all, as the Pew Research Center documented, distrust of Washington is an American tradition, one which tends to rise and fall inversely with the economy. But the spike in anger towards the federal government, a fury which doubled to 21% since 2000, points to a potential midterm bonanza for the GOP. All of which suggests that the Republican Party whose anti-government rhetoric and incompetence in office helped kill trust in government may now be rewarded for it.

By now, the Republican recipe should be all too familiar. First is to endlessly insist that, as Ronald Reagan famously said, "Government is the problem." Second is the self-fulfilling prophecy of bad government under Republican leadership, as the Bush recessions of 1991 and 2007, the Hurricane Katrina response, the Iraq catastrophe and the transfer of federal oversight powers to the industries being regulated all showed. Third, when the backlash from the American people inevitably comes as it did in 1992 and 2008, attack the very legitimacy of the new Democratic president they elected. Fourth, turn to the filibuster and other obstructionist tactics to block the Democratic agenda, inaction for which the incumbent majoirty will be blamed. Last, target the institutions and programs (Social Security, Medicare, the IRS) which form the underpinnings of progressive government.
Then lather, rinse and repeat.
Now, as the Pew data show, Republicans are proving that nothing succeeds like failure. As Pew's Andrew Kohut wrote in the Wall Street Journal, "Just 22% say they can trust the government in Washington almost always or most of the time, among the lowest measures in half a century." Congress and most agencies, Kohut reported, have suffered correspondingly steep declines in public trust:

Opinions about elected officials are particularly poor. Just 25% have a favorable opinion of Congress while 65% have an unfavorable view--the lowest favorable ratings for Congress in more than two decades of Pew Research center surveys.
Favorable ratings for federal agencies and institutions have fallen since 1997-98 for seven of 13 federal agencies included in the survey. The declines have been particularly large for the Department of Education, the Food and Drug Administration, the Social Security Administration, as well as the Environmental Protection Agency, the National Aeronautics and Space Administration, and the Centers for Disease Control and Prevention.
As in the past, poor performance is the most persistent criticism of the federal government. But increasingly Americans say that government has the wrong priorities and that has a negative effect on their day-to-day lives. Sixty-two percent say that government policies unfairly benefit some groups, while nearly as many (56%) say that government does not do enough to help average Americans.

But the dismal economy George W. Bush bequeathed to Barack Obama and the manufactured Tea Party movement that predated his inauguration are seemingly working to the benefit of Republicans for the November elections:

Over the course of the past decade we've seen a spike in intense antigovernment attitudes amongst a small segment of the public. The proportion saying they are angry with the federal government has doubled since 2000, increasing to 21% from 10%. And a larger minority of the public has come to view the federal government as a major threat to their personal freedom: 30% feel this way, up from 18% in a 2003 ABC News/Washington Post survey...
Record discontent with Congress and dim views of elected officials generally have poisoned the well for trust in the federal government. Public opinion about elected officials in Washington is relentlessly negative. Favorable ratings for the Democratic Party have fallen by 21 points--to 38% from 59%--over the past year and now stand at their lowest point in Pew Research surveys. The Republican Party's ratings, which increased to 46% in February from 40% last August, have fallen back to 37%.
Nonetheless, antigovernment sentiment appears to be a more significant driver of possible turnout among Republicans and independents than among Democrats. Perhaps most troubling for Democrats, independent voters who are highly frustrated with government are also highly committed to casting a ballot this year, and they favor the Republican candidates in their districts by an overwhelming 66% to 13% margin.

And that "poisoned well," as Kohut suggests, bodes ill for incumbents in general and the majority Democratic Party in particular. Ten days ago, political statistician Nate Silver forecast that the "generic ballot points toward possible 50+ seat loss for Democrats." One week later, Stuart Rothenberg wrote that "At this point, GOP gains of 25-30 seats seem likely, though considerably larger gains in excess of 40 seats certainly seem possible." 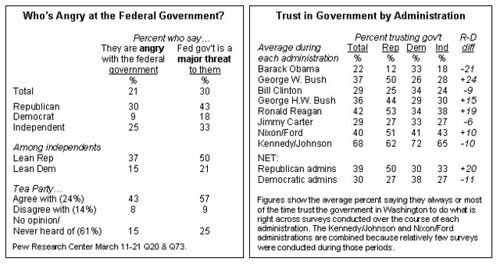 Just as troubling for Democrats as the electoral dark clouds overhead is the shifting public mood against a progressive role for government in general. The contentious health care debate and the stigmatized though successful stimulus program are apparently contributing factors. Outside of their 61% to 31% support for regulation of financial companies, a 51% to 40% majority of Pew respondents no longer believe it is a good idea for the government to exert more control over the economy. That's a reversal from broad support (54%) for the same proposition in March 2009.
Author and Wall Street Journal columnist Thomas Frank is probably best known for What's the Matter with Kansas, which documents the Republicans' proven success in using social wedge issues to lead working Americans to vote against their economic self-interest. But in was in his subsequent book, The Wrecking Crew, in which Frank laid out the tried and true Republican formula for breaking - then retaking - government. As it turns out, the failure of conservatives to govern isn't a bug, it's a feature:

"The chief consequence of the conservatives' unrelenting faith in the badness of government is...bad government...
...And remember. None of it is accidental. These are the fruits of the free market theory of government."

As 1930's Labor Department lawyer Carl Auerbach once put it, "You cannot run on a platform that government is the problem and expect the best people in the country to want to be a part of the problem."
No, but Republicans are only too happy to take on the job and make the problem worse. Having killed Americans' trust in government, the Republican Party and its conservative amen corner now seems poised to get away with the murder. On that point, the Pew Center numbers suggest, the GOP mantra will be: "Trust Us."

2 comments on “Getting Away with Murder: How the GOP Killed Trust in Government”