By 2022, the Affordable Care Act is forecast to enable roughly 30 million uninsured people to obtain health insurance. But according to a new report by the U.S. Department of Health and Human Services (HHS), that expansion of coverage will progress much more slowly than the agency forecast just last year. Thanks primarily to Republican governors and state legislators, Eleven million Americans will be needlessly left without insurance by the end of 2014. 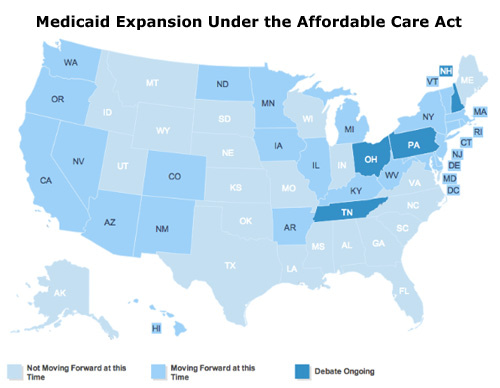 Reuters ("U.S. government scales back Obamacare impact for 2014") explained the dynamic behind the millions left uninsured in largely in GOP-controlled states:

The biggest factor in the change stems from the U.S. Supreme Court verdict last year allowing each state to decide whether to expand the public Medicaid program for the poor under President Barack Obama's healthcare reform law. Republican leaders in nearly half of the nation's 50 states have rejected the expansion.
The U.S. Department of Health and Human Services now expects 11 million uninsured Americans to obtain coverage next year, down from about 22 million projected a year ago, according to the report, which appeared in the journal Health Affairs...The new report estimates that Medicaid enrollment will increase by 8.7 million people in 2014, nearly all as a result of the Obamacare expansion. Last year, analysts projected that about 20 million people would gain coverage through the expansion alone.

As other studies have warned, the state-by-state numbers are shocking. In Texas, Governor Rick Perry denounced Obamacare Medicaid expansion as a "fool's errand." But his foolishness in opting out means an extra 1.9 million Texans will needlessly go without health insurance in state where 24 percent of all residents--and 30 percent between the ages of 18 and 64--lack coverage. In Florida, where the GOP legislature is rebuffing Republican Governor Rick Scott's choice to accept the windfall from Washington, another million residents will be left uncovered. (In contrast, over 300,000 more Arizonans will gain insurance, thanks to a rare showing of common sense by Governor Jan Brewer.) Next door neighbors Minnesota and Wisconsin provide another useful case study. While Democrat Mark Dayton will be cutting the ranks of the uninsured by almost half in his state, in Madison Republican Scott Walker is leaving an estimated 182,000 folks out in the cold.
Mercifully, the frightening red state health insurance "coverage gap" likely won't be permanent. As Gigi Cuckler, an economist with the Centers for Medicare and Medicaid Services and co-author of the HHS report explained:

"For the states that do expand, we're expecting that some will elect to expand their Medicaid programs after 2014."

The past few weeks have provided grounds for optimism on that point. In Pennsylvania, GOP Governor Tom Corbett is trying to follow Rick Snyder's leader in Michigan by accepting the Medicaid expansion. As Sarah Kliff detailed on Monday, the impact will be significant:

Between Pennsylvania and Michigan, you're looking at more than 800,000 people becoming eligible for new health law programs. And if the Pennsylvania expansion does go through, it would be the 26th state to expand Medicaid, meaning that the majority of states had decided to opt into a massive health law provision that the Supreme Court decision last year accepted.

Ohio's GOP Governor John Kasich wants to join them. He is continuing to press his GOP legislative majority to accept the Medicaid expansion that would cover an additional 366,000 Buckeye State residents, declaring "I believe it's a matter of life and death." As Kasich warned his GOP colleagues in June:

A decade from now, the Congressional Budget Office forecasts that roughly 31 million people (most of them undocumented immigrants and Medicaid "unrolled eligibles") will still lack health insurance. But the halving of America's uninsured population could happen much more quickly if Republican leaders weren't standing in the way. With a bevy of studies estimating that up to 45,000 people die each year in America due to their lack of health insurance, the success of the Affordable Care Act is, as Governor Kasich warned, a matter of life and death.
(It's worth noting that the CBO has not been as aggressive in its assumptions regarding Medicaid enrollment rates. The agency explains why here.)