Republican politics are now defined by necessary lies, untruths like "tax cuts pay for themselves" which GOP orthodoxy requires be true. So it should come as no surprise that the Republican members of the Financial Crisis Inquiry Commission are dissenting from the panel's upcoming report to falsely claim that Fannie Mae and Freddie Mac were responsible for the meltdown of the U.S. financial system. But what Paul Krugman deemed the Republicans' "invincible ignorance" is just the latest sinister episode in the duplicitous conservative effort to blame government for everything.
First, a little background. As the Washington Post's Ezra Klein pointed out in June, "No, Fannie and Freddie did not cause the housing crisis." Klein highlighted a series of charts compiled by Krugman that "together, eviscerate the claim that the housing crisis was somehow the product of government policy meant to extend home loans to low-income borrowers."
As Krugman explained six months ago, "Just to repeat the basic facts here:"

1. The Community Reinvestment Act of 1977 was irrelevant to the subprime boom, which was overwhelmingly driven by loan originators not subject to the Act. 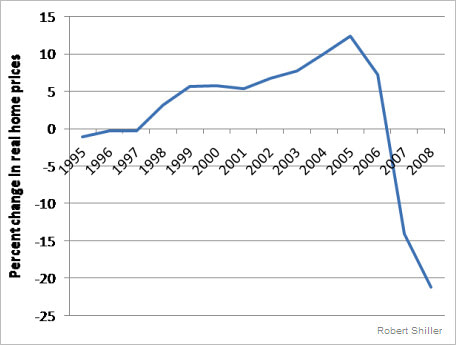 2. The housing bubble reached its point of maximum inflation in the middle years of the naughties: 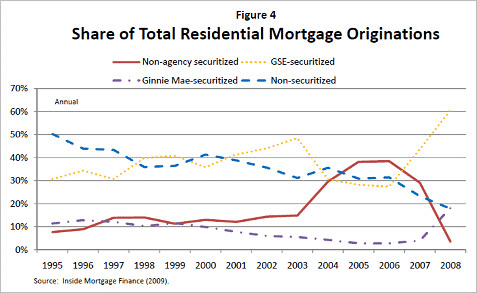 3. During those same years, Fannie and Freddie were sidelined by Congressional pressure, and saw a sharp drop in their share of securitization...while securitization by private players surged.

As McClatchy summarized it in October 2008, "Private sector loans, not Fannie or Freddie, triggered crisis":

Subprime lending offered high-cost loans to the weakest borrowers during the housing boom that lasted from 2001 to 2007. Subprime lending was at its height from 2004 to 2006.
Federal Reserve Board data show that:
More than 84 percent of the subprime mortgages in 2006 were issued by private lending institutions.
Private firms made nearly 83 percent of the subprime loans to low- and moderate-income borrowers that year.
Only one of the top 25 subprime lenders in 2006 was directly subject to the housing law that's being lambasted by conservative critics.

Clarifying matters further is this graph from Barry Ritholtz. It is hard to suggest that "FNM/FRE/CRA caused it" when the housing bubble outside the United States was much more explosive:

Undeterred by the truth, all four members of the Fiscal Commission nevertheless decided to issue their own separate revisionist in advance of the panel's final report. Angered that the committee voted 6-4 to limit the length of dissenting views, the GOP panelists will release a 13-page document condemning the government-sponsored enterprises Fannie and Freddie. As the New York Times reported:

"While the housing bubble, the financial crisis, and the recession are surely interrelated events, we do not believe that the housing bubble was a sufficient condition for the financial crisis," the document states. "The unprecedented number of subprime and other weak mortgages in this bubble set it and its effect apart from others in the past."
The document was signed by Bill Thomas, the vice chairman of the commission and a former congressman from California; Keith Hennessey, a former adviser to President George W. Bush; Douglas Holtz-Eakin, a former director of the Congressional Budget Office; and Peter J. Wallison, who was White House counsel to President Ronald Reagan and is now a fellow at the American Enterprise Institute.

And as Huffington Post revealed, the Republican panelists weren't content to recycle discredited right-wing talking points about the supposedly dark roles of Fannie, Freddie and the Community Reinvestment Act. The GOP language police wanted to censor the commission's findings to redact inconvenient truths:

During a private commission meeting last week, all four Republicans voted in favor of banning the phrases "Wall Street" and "shadow banking" and the words "interconnection" and "deregulation" from the panel's final report, according to a person familiar with the matter and confirmed by Brooksley E. Born, one of the six commissioners who voted against the proposal.

And so it goes for the necessary lies of the Republican Party. If, for example, the Bush tax cuts didn't pay for themselves but instead produced mountains of debt and record income inequality, then the GOP has simply been giving away money to rich people. And if factors like "factors like fraudulent practices by mortgage lenders and reckless risk-taking by Wall Street banks and other financial institutions" largely explain the financial crisis of 2008, the Republican jihad against regulatory reform is just another conservative fraud.