When House Speaker John Boehner denounced Democratic proposals to fund a payroll tax cut extension through a surtax on millionaires as a "job-killing tax hike on small businesses," he might have wanted to check with some first. As NPR revealed yesterday, the Congressional Republicans they consulted, including in the House and Senate leadership, "were unable to produce a single millionaire job creator for us to interview."

If this pathetic GOP charade sounds familiar, it should. After all, a decade ago President Bush and Congressional Republicans decried the supposed "death tax" that "destroys a lot of small businesses and a lot of family farms and ranches in America." But despite their utter inability to document the carnage wrought by the estate tax, Republicans nevertheless succeeded in diverting billions of dollars each year from the U.S. Treasury to a handful of the very richest families in the country.
In 2009, then Minority Leader Boehner regurgitated the long-debunked GOP talking point on the estate tax:

"People who aren't wealthy, who may have built up value in land over generations and many family farms find themselves in situations where they've got to sell the farm in order the pay the taxes."

Unfortunately, that claim is just as false today as when George W. Bush uttered it during and after the 2000 presidential campaign. Now as in 2001, Republicans wrongly claimed that the estate tax led to the loss of family farms. When President Bush blasted opponents who say "the death tax doesn't cause people to sell their farms" with a mocking "don't know who they're talking to in Iowa," neither Hawkeye State farmers nor researchers could name one. As David Cay Johnston, among the nation's leading journalists when it comes to tax issues, conclude in the New York Times nine years ago:

Nevertheless, the Bush tax cuts of 2001 began the process of lowering the estate tax from 55 percent in 2000 to 45 percent in 2009, while raising the per person exemption from $675,000 to $3.5 million. By then, the $25 billion in annual tax revenue generated came from a small number of the largest fortunes in America. 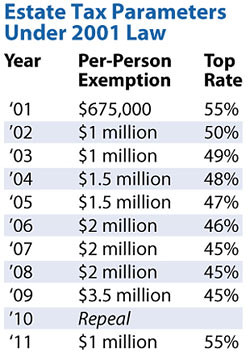 But unless Congress took action on the expiring Bush tax cuts, the estate tax would drop to zero in 2010 before returning to its previous level on 55 percent. In 2009, the Center on Budget and Policy Priorities (CBPP) estimated that only 1 in 500 estates (0.24%) was impacted by the $3.5 million per person threshold and 45% tax rate President Obama and House Democrats sought to continue. The Tax Policy Center quantified just how few family farms or small businesses are actually impacted by the estate tax proposals under consideration, including the $5 million exemption and 35% rate advocated by Blanche Lincoln (D-AR) and Jon Kyl (R-AZ) and later signed into law by President Obama:

But thanks to the $800 billion compromise tax package President Obama inked last December, one family-owned business - Walmart - could reap a multi-billion dollar bonanza.
As Vermont Senator Bernie Sanders explained in his filibuster, the elimination of the estate tax could save the Walton family alone $32.7 billion. (Already, the one-year lapse of the levy allowed the estates of George Steinbrenner and Texas billionaire Dan Duncan to escape taxes altogether in 2010.) But as the Arkansas Times pointed out, the Republicans' successful brinksmanship ensured Sam Walton's clan will keep billions out of the hands of Uncle Sam:

(For years, the Waltons have been supporting efforts to cut the estate tax. As Salon reported this week, it's no wonder why. "Just six members of Walmart's Walton clan are worth as much as the bottom 30 percent of all Americans." It's also no wonder why University of California Professor Sylvia Allegretto described the Walton 6 and their $70 billion fortune as, "the few, the proud, the very rich.")
As it was with estate tax so it now is with the millionaire's surtax. South Dakota Republican Senator John Thune warned, "It's just intuitive that, you know, if you're somebody who's in business and you get hit with a tax increase, it's going to be that much harder, I think, to make investments that are going to lead to job creation."
As it turns out, not so much.
When NPR tried to fact-check Thune's claim, they got a surprising - and for Republican myth-makers, unfortunate - result:

We wanted to talk to business owners who would be affected. So, NPR requested help from numerous Republican congressional offices, including House and Senate leadership. They were unable to produce a single millionaire job creator for us to interview.

Suzy Khimm of the Washington Post explained why the GOP's best and brightest drew a blank:

Just 2 percent of all business owners who file taxes through individual returns--including sole proprietorships, limited liability corporations, S corporations, and partnerships--have taxable income that's more than $1 million, according to an August 2011 Treasury report. And just about 1 percent of those Treasury categorizes as "small businesses owners" would be affected by the Democrats' proposed millionaire's tax --about 273,000 in total. That number drops even further--to 51,000--if you define "small business owners" as those earning at least 25 percent of income through their firm.
Such findings are in line with independent analyses of small business "millionaires" as well. The non-partisan Tax Policy Center--a partnership between Brookings and the Urban Institute--calculates that 1 percent of those reporting business income via individual returns in 2011 would be subject to the millionaire's tax, about 340,000 in total.

Research shows that a mere 1 percent of small business owners make more than $1 million per year. Only about 5.4 million of the nation's 20 million small businesses pay any wages at all. The Republican claim about wealthy small business job creators, it turns out, is based on a convenient and overly broad definition of "small" that includes partnerships and S-corporations, like hedge funds, accounting firms, law practices and other often big businesses.
So when they claim to be protecting small business from high-end taxes, Republicans are really talking about protecting big companies whose owners fall into the one-half of 1 percent of taxpayers who are millionaires or better. A surtax would certainly not hurt them.

Despite the Republicans' demagoguery, the millionaires' surtax would ironically help all American small businesses. After all, each of them would save from the continuation of the payroll tax reduction Democrats are advocating. (The savings would have been even larger if the employer's share of the payroll tax was reduced, as President Obama proposed.) Jonathan Cohn summed up what the millionaires' surtax would deliver for all American small business owners:

But wait -- the Republican argument is even more misleading than it seems. The purpose of this particular millionaire tax is to offset the cost of extending the payroll tax break set to expire at the end of this year. That tax break doesn't simply help employees. It helps employers too. Chuck Marr of the Center on Budget and Policy Priorities explains:
The bill's payroll tax cut would not only boost workers' paychecks by hundreds of dollars or more in 2012 but also cut the taxes of every small business. Employers would receive a tax holiday on fully half of their 2012 Social Security taxes on the first $5 million in payroll. If employers create jobs, they would pay no Social Security taxes on the first $50 million in increased taxable payroll.

Cohn concludes by asking, "So will Republicans continue to oppose the payroll tax break, effectively raising taxes not only on workers but also many of their employers -- all to protect the very wealthiest Americans?"
Of course. Because millionaires are "job creators," even when lower taxes don't lead them to create any jobs. Because the cost of tax cuts for working Americans must be offset, even if the windfalls for the wealthy do not. Because the estate tax causes families to lose their farms and small businesses, even if doesn't. And because for Republicans, after all, "tax cuts pay for themselves."
Even if they don't.