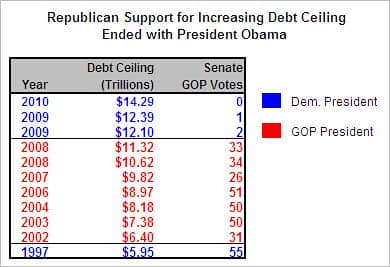 Turning to the Republican Party for lessons on fiscal discipline is a lot like taking advice on abstinence from Bristol Palin. But unlike Ms. Palin's one known failure to practice what she now preaches, Republicans are repeat offenders. After all, the national debt tripled under Ronald Reagan, only to double again under George W. Bush. And while Congressional Republicans are now threatening a national economic calamity in a game of political chicken over the U.S. debt ceiling even George Will deemed "suicidal," they are predictably silent about the seven increases President Bush signed into law.
"Reagan proved," Vice President Dick Cheney famously said in 2002, "deficits don't matter." Not, that is, when a Republican is sitting in the White House.
As the New York Times' David Leonhardt summed it up in June 2009, "The economic growth under George W. Bush did not generate nearly enough tax revenue to pay for his agenda, which included tax cuts, the Iraq war, and Medicare prescription drug coverage." The Center on Budget and Policy Priorities (CBPP) found that the Bush tax cuts accounted for almost half of the mushrooming deficits during his tenure. And prior to their recent two-year extension, another CBPP analysis forecast that over the next 10 years, the Bush tax cuts if made permanent would contribute more to the U.S. budget deficit than the Obama stimulus, the TARP program, the wars in Afghanistan and Iraq, and revenue lost to the recession put together. And Bush's Treasury-draining windfall for the wealthy, as the Peterson Institute's Steven Weisman explained, represented "the first time in American history taxes were lowered at a time of war and not raised." It's no wonder Leonhardt concluded that:

"President Obama's agenda, ambitious as it may be, is responsible for only a sliver of the deficits, despite what many of his Republican critics are saying."

But that's not stopping them from promising a global economic catastrophe if their still-unspecified spending cuts aren't made.
By this spring, the U.S. debt ceiling will have to be bumped up from it current $14.3 trillion level. But for the first time in the nation's history, the emboldened GOP leadership is threatening to block the needed increase and so trigger a default by the government of the United States.
That was the word from Senate Minority Leader Mitch McConnell. Within hours of November's midterm voting, McConnell signaled the GOP would oppose boosting the debt ceiling needed to avoid a global economic panic unless there were "strings attached." South Carolina Senator Jim Demint made clear what strings he had in mind. Asked if he'll support raising the debt ceiling, Demint responded:

"No, I won't. Not unless this debt ceiling is combined with some path to balancing our budget, returning to 2008 spending levels, repealing Obamacare. We have got to demonstrate that we have the resolve to cut spending ... we cannot allow that to go through the Congress without showing the American people that we are going to balance the budget, and we're not going to continue to raise the debt in America."

"I will not vote for the debt ceiling increase until I see a plan in place that will deal with our long-term debt obligations starting with Social Security, a real bipartisan effort to make sure that Social Security stays solvent, adjusting the age, looking at means-tests for benefits."

For his part, Demint is pushing a constitutional amendment to balance the budget because, "No one is willing to say we need to cut this, this and that." That's especially true among his Republican allies, who refuse to lay out the draconian budget cuts they claim to want.
As the Wall Street Journal described in "Congress Targets Spending," so far new House Speaker John Boehner has only been willing to pony up $25 million in cuts from an annual federal budget topping over $3 trillion:

The incoming House majority will start by offering two measures this week that carry more symbolism than substance. One will be a motion to repeal the health bill that President Barack Obama signed last year, and the second will be a measure to trim the cost of running the House itself.

But as the New York Times and Bloomberg previously explained, the GOP's promise to immediately return to pre-recession FY 2008 levels for "non-security discretionary spending" with would result in devastating cuts to popular and needed programs. With the Pentagon, Social Security and Medicare off the table, those draconian cutbacks would slash more than 20 percent of spending by departments like Education, Transportation, Interior, Commerce and Energy:

U.S. House Republicans' pledge to cut $100 billion from the federal budget next year would slash spending for education, cancer research and aid to local police and firefighters.
Keeping the midterm-campaign promise would require a Republican-led Congress to cut 21 percent of the $477 billion lawmakers have earmarked for domestic discretionary spending.

It no's surprise that Boehner, who during the midterm campaign promised an "adult conversation" over the deficit, remains silent on where his budget ax will fall. As CNN noted last week:

Asked which programs will be cut to get to the $100 billion target, Boehner did not offer specifics.
"But I will tell you," he told reporters earlier this month. "We are going to cut spending."

Meanwhile, Obama economic advisor Austan Goolsbee on Sunday wanted to be sure the American people understood the implications and causes of the GOP's dangerously hypocritical game of chicken on the national debt:

"This is not a game. You know, the debt ceiling is not something to toy with. ... If we hit the debt ceiling, that's essentially defaulting on our obligations, which is totally unprecedented in American history. The impact on the economy would be catastrophic. I mean, that would be a worse financial economic crisis than anything we saw in 2008...
If we get to the point where you've damaged the full faith and credit of the United States, that would be the first default in history caused purely by insanity."

And insanity is, as Albert Einstein defined it, "doing the same thing over and over again and expecting different results."
Like listening to the Palins on abstinence education or trusting Republicans on national debt.