"You can fool some of the people all of the time, and that's our target market." That perversion of Abraham Lincoln's timeless adage might as well be the slogan of the modern Republican Party, especially when the topic is taxes. After all, the Congressional Budget Office (CBO), the Joint Committee on Taxation, (JCT), the Wharton School, the Tax Policy Center and a host of think tanks have concluded that the GOP tax bill will produce between $1 trillion and $1.5 trillion in additional debt over the next decade. But if "tax cut pay for themselves" is a cynical myth designed to force deep spending cuts in the future, so too is the notion that the "Tax Cuts and Jobs Act" (TCJA) produces either tax relief or jobs for lower- to middle-income Americans. It's no wonder that Republicans from Maine Sen. Susan Collins to House Speaker Paul Ryan have been struggling to manufacture lists of conservative economists to vouch for their voodoo.
But more appalling than the grotesque GOP disinformation campaign itself is the Republican regurgitation of decades-old lies to sell it. The GOP's best and brightest have been peddling the same fiscal fantasies since supply-side snake oil salesman Arthur Laffer first sketched his magical Curve on a cocktail napkin for Team Reagan in the 1970s. The passage of time has not made the GOP falsehoods any more true. 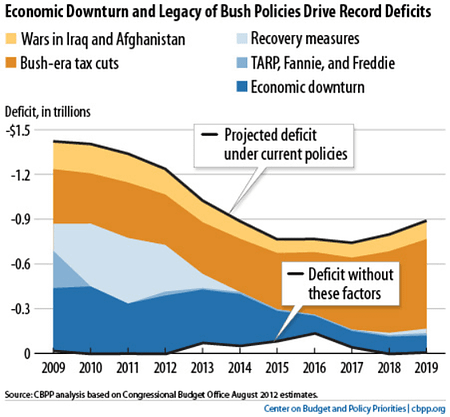 Consider, for example, Senator Majority Leader Mitch McConnell. Despite a mountain of evidence to the contrary, McConnell declared himself "totally confident" that the TCJA passed by the Senate will not add to the deficit, adding:

"I think it's going to be a revenue producer."

Now, there's no need to stop me if you think you've heard this one before; you have. That's because back in 2010, then-Minority Leader McConnell used the same talking point to defend the extension of the Bush tax cuts of 2001 and 2003 for the richest Americans. Defending that windfall for the wealthy that would drain $70 billion annually from the United States Treasury, the No.2 Senate Republican Jon Kyl of Arizona proclaimed, "You should never have to offset the cost of a deliberate decision to reduce tax rates on Americans." McConnell rushed to Kyl's defense, announcing that his fiscal fraud was in fact now Republican orthodoxy:

"There's no evidence whatsoever that the Bush tax cuts actually diminished revenue. They increased revenue because of the vibrancy of these tax cuts in the economy. So I think what Senator Kyl was expressing was the view of virtually every Republican on that subject."

But then as now, Republican agreement on that view doesn't make it a fact. History tells us so. And that history starts, it turns out, with Ronald Reagan's arrival in the White House in 1981.
Continue reading at Daily Kos.