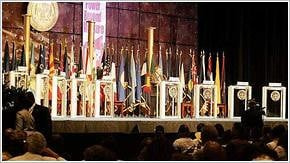 In January, the new Hispanic Leadership Network is hosting a forum to showcase the 2012 Republican presidential field. But while the event is well funded by the conservative American Action Network, it is lacking for one thing: the GOP White House hopefuls themselves. If this slap in the face of America's fastest growing voting block sounds familiar, it should. In the run-up to the 2008 election, the Republican contenders then as now skipped events organized by minority political organizations.
If next month's event was designed to be the Conservative Political Action Conference (CPAC) for Hispanics, it has run into a major roadblock:

"A poor showing could raise doubts about the commitment of Republicans to court Hispanics," Politico reported, "one of the open-ended questions of the 2012 presidential cycle."
As it turns out, that question has long since been answered. With the GOP's embrace of the hard-line, anti-immigrant policy and rhetoric championed by its xenophobic base, the Party's would-be leaders have been playing duck and cover with minority voters for years.
In July 2007, all but one of nine GOP presidential contenders shunned the annual NAACP convention in Detroit, leaving Tom Tancredo alone among the empty podiums. Two months later, Fred Thompson, Mitt Romney, John McCain and Rudy Giuliani skipped a PBS event hosted by Tavis Smiley at the predominantly black Morgan State University. And that same September, the Republican field added the Univision presidential forum to their list of no-shows. (Ironically, only former immigration reformer John McCain agreed to attend.)
The message from the Republicans to minority voters could not be clearer. "When you tell every black and brown request that you get throughout the primary process that 'no, there's a scheduling problem.' That's a pattern," PBS' Smiley lamented, adding, "Are we really supposed to believe that all four of these guys couldn't make it because of scheduling?" As Cecilia Munoz of the National Council of La Raza put it:

"It's not just that they are not coming. It's that some of them are visibly insulting us."

The numbers tell the tale. In 2006, the GOP showed no progress among black voters, who continued to back Democratic candidates at historically high levels approaching 90%. (Barack Obama exceeded that stratospheric support in 2008) More telling, Republicans started losing the ground they had gained among the nation's rapidly growing Hispanic communities, now topping 45 million. While John Kerry carried only 53% of the Hispanic vote in 2004, by 2006 Democrats won 69% support among Hispanics who went to the polls. President Obama similarly won their vote by a 2-1 margin two years later. Even in the GOP's 2010 landslide, Democrats earned the backing of 60% of Latino voters.
For his part, Newt Gingrich is a fence-sitter about the 2011 Hispanic Leadership Network event. But in the fall of 2007, Gingrich worried about the inescapable message GOP no-shows were sending to minority communities:

"For Republicans to consistently refuse to engage in front of an African American or Latino audience is an enormous error. I hope they will reverse their decision and change their schedules. I see no excuse -- this thing has been planned for months, these candidates have known about it for months. It's just fundamentally wrong. Any of them who give you that scheduling-conflict answer are disingenuous. That's baloney."

In response to the latest Republican snub of Hispanic voters, Alfonso Aguilar, executive director of the Latino Partnership for Conservative Principles, sighed:

"It is not good timing. It is not ideal. This may become the CPAC for Hispanic Republicans, but it is not going to be that now."

Not now, and not any time soon.