How to Hatch a Republican Leader 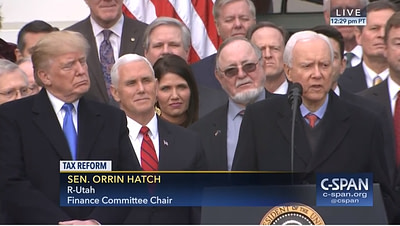 "If you had gone into a chemical laboratory to concoct a politician whose background and manner would sound liberal alarms," Washington Free Beacon editor-in-chief and Bill Kristol son-in-law Matthew Continetti pondered in 2009, "You probably would have come up with someone like Sarah Palin." While the Quitta from Wasilla made Continetti's theory laughable at the time, he has been vindicated by history, at least in part. As it turned out, Sarah Palin was the gateway drug to Donald Trump.
Imagine instead you went into that same lab to formulate an elder statesman for the Republican Party. But during the process, impurities like crystal meth, Appalachian coal or cheap Russian vodka somehow got into your recipe. Soon, your would-be GOP giant of the Senate began claiming Congress had no right to interfere in the president's policy towards Iran, only to completely reverse course when the White House changed hands. Then the incoherent babbling only got worse. Your conservative creation would co-sponsor health care reform legislation calling for an individual health insurance mandate, only to then declare a "holy war" to stop the mandate he now called "unconstitutional." The Frankenstein senator would call on President Obama to nominate Judge Merrick Garland for the Supreme Court and promise, "I will do my best to help him" before then writing an op-ed demanding Garland's blockade. Next, the out-of-control octogenarian would declare "we don't have money anymore" to pay for a health care program he helped create for nine million children while muttering that "it was standard practice not to pay for things" when he supported a much larger, unfunded prescription drug benefit for the GOP's elderly base. Finally, the crazed conservative creature would emerge fully formed at the White House to give the wildly unpopular Donald Trump a nationally-televised tongue bath:

Well, Mr. President, I have to say that you're living up to everything I thought you would. You're one heck of a leader, and we're all benefiting from it...
And I have to say, that this is one of the great privileges of my life to stand here on the White House lawn with the President of the United States, who I love and appreciate so much, and with these wonderful colleagues and Cabinet members who stand behind us...
And we're going to keep fighting, and we're going to make this the greatest presidency that we've seen, not only in generations, but maybe ever.

Only then does it dawn on you. Your creation isn't just the Wise Old Man of the Party of Lincoln. He's the perfect symbol for the rhetorical rot, political perversion and moral decay of the Republican Party. He's retiring Utah Sen. Orrin Hatch.
Continue reading at Daily Kos.