Former Vermont Governor and Democratic National Committee Chairman Howard Dean may like to claim he represents "the Democratic wing of the Democratic Party," just not on health care. In a Wall Street Journal op-ed, the one-time 2004 frontrunner turned K Streeter warmed conservative hearts by declaring "the Affordable Care Act's rate-setting won't work." Sadly for Dr. Dean, his diagnosis that "experience tells me the Independent Payment Advisory Board will fail" instead shows only his ignorance and opportunism. 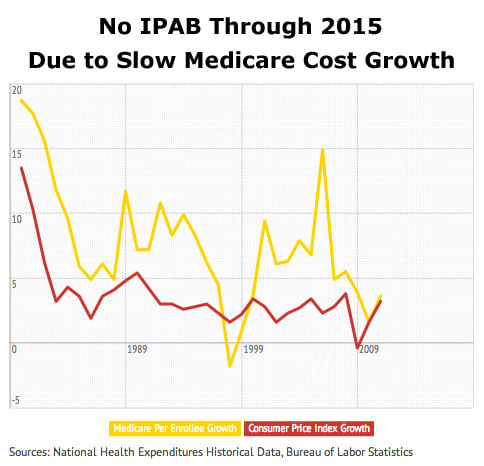 To be sure, the Independent Payment Advisory Board (IPAB) is among the most controversial provisions of the Affordable Care Act. Slandered by conservatives as the Obamacare "death panel," IPAB was designed to be a mechanism for controlling the cost of the Medicare program. But the "new, 15-member panel that has the authority to reduce Medicare doctors' reimbursements and pilot new ways to deliver high quality care for less" will play no role unless Medicare costs are forecast to grow faster than targets set by Congress. As Sarah Kliff explained:

But because of the dramatic slowdown in Medicare cost growth, the program's chief actuary announced in April, the IPAB will not come into play at least through 2015. "Because the projected 5-year Medicare per capita growth rate does not exceed the Medicare per capita target growth rate," he wrote, "There is no applicable savings target for implementation year 2015."
But you'd never know any of this reading Dr. Dean's broadside. Regurgitating some of the right-wing's most notorious myth-making, Dean charged:

The IPAB is essentially a health-care rationing body. By setting doctor reimbursement rates for Medicare and determining which procedures and drugs will be covered and at what price, the IPAB will be able to stop certain treatments its members do not favor by simply setting rates to levels where no doctor or hospital will perform them.

That, Brad Delong lamented, "is Howard Dean being mendacious to try to protect the profits of the clients of McKenna, Long, & Aldridge." As Jonathan Cohn made clear in the New Republic:

It was a ridiculous accusation. As a briefing from the Kaiser Family Foundation explains, Obamacare explicitly prohibits IPAB from "submitting proposals that would ration care, increase taxes, change Medicare benefits or eligibility, increase beneficiary premiums and cost-sharing requirements, or reduce low-income subsidies under Part D."

As it turns out, Dean's accusation is doubly-ironic. After all, he was a supporter of a "public option" for health insurance in the Affordable Care Act, Cohn recalled, precisely because it would "help set payment rate" and virtually guarantee that "doctors, hospitals, along with device and drug makers would make less money." And when Dean protests that "rate setting--the essential mechanism of the IPAB--has a 40-year track record of failure," he's neglecting to mention that it is the American Medical Association and its Specialty Society Relative Value Scale Update Committee (RUC) which "assigns values to thousands of services doctors provide." As the Washington Post recently documented:

Unknown to most, a single committee of the AMA, the chief lobbying group for physicians, meets confidentially every year to come up with values for most of the services a doctor performs.
Those values are required under federal law to be based on the time and intensity of the procedures. The values, in turn, determine what Medicare and most private insurers pay doctors.
But the AMA's estimates of the time involved in many procedures are exaggerated, sometimes by as much as 100 percent, according to an analysis of doctors' time, as well as interviews and reviews of medical journals.

It's no wonder members of both parties are proposing legislation to fix that process.
As for Howard Dean, Cohn notes, "He's a strategic adviser to McKenna, Long, and Aldridge, a major Washington lobbying firm whose clients have included health care and pharmaceutical companies." As his IPAB pablum in the Wall Street Journal once again confirms, it's with good reason one big pharma CEO claimed "Dean has been a great addition to our team." As for the Democratic team and its big game on health care, not so much.