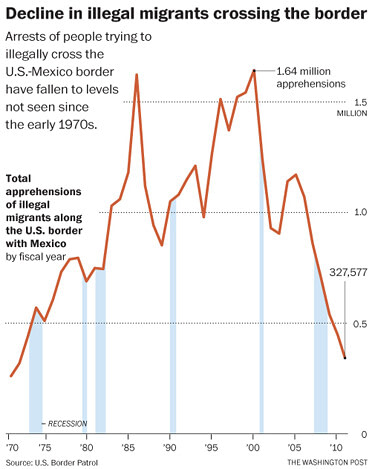 The Republican presidential contest is a lot like The Wizard of Oz: no brain, no heart and a whole lot of cowardly lyin'. And perhaps on no issue is the GOP's field's misguided cruelty and duplicity more profound than illegal immigration. After all, while Michele Bachmann wants to deport all 11 million current illegal aliens and Herman Cain wants to electrocute new ones, one-time employer Mitt Romney declared, "I'm running for office, for Pete's sake, I can't have illegals." Meanwhile, John McCain pleaded with the 2012 candidates to be more "humane" about immigration so as to not once again alienate the Hispanic voters who overwhelming chose Barack Obama in 2008.
But largely lost in all the fiery rhetoric is this. Over the last several years, illegal immigration from Mexico has plummeted to levels not seen since the 1970's. And with two-thirds of adult unauthorized immigrants having been in the U.S for at least 10 years and nearly half having minor children, , those Republicans so eager to remove the millions already here would precipitate a humanitarian disaster.
As the Washington Post revealed Saturday, "We have reached the point where the balance between Mexicans moving to the United States and those returning to Mexico is essentially zero."

The Border Patrol apprehended 327,577 illegal crossers along the U.S.-Mexico border in fiscal year 2011, which ended Sept. 30, numbers not seen since Richard Nixon was president, and a precipitous drop from the peak in 2000, when 1.6 million unauthorized migrants were caught. More than 90 percent of the migrants apprehended on the southwest border are Mexican.
The number of illegal migrants arrested at the border has been dropping over the past few years but appears to be down by more than 25 percent this year.

Several factors are fueling that dramatic decline. The Obama administration's border crackdown and record number of deportations are having an impact. Draconian laws in states like Arizona and Alabama have made life much more difficult for undocumented workers. So, too, is increasing violence from the Mexican drug wars, which is making crossing the border a much more dangerous proposition.
But those considerations pale compared to the impact of the deep U.S. recession beginning in late 2007. The Los Angeles Times explained how the sluggish American economy is suppressing immigration, legal and otherwise:

These days, Mexicans in the United States have discouraging words for loved ones about prospects for work up north. U.S. contractors who used to recruit in Mexico likewise have little to offer.
"What stimulates migration is the need for workers," said Genoveva Roldan, a scholar at the National Autonomous University of Mexico. "Right now, the migrant networks are functioning to say, 'Don't come -- there's no work.' "

While the Mexican economy is one of the strongest in Latin America, the persistently high unemployment in the U.S. is literally a barrier to entry. As Juan Luis Ordaz, senior economist for the Bancomer Foundation put it, "The arrests on the border are moving like the U.S. economic cycle." The drop-off can also be measured in dollars:

Data from Mexican surveys show that the amount of money sent home from the United States is falling, from a peak of $24 billion in 2007 to $21 billion last year, according to Mexico's Central Bank.

As for the roughly 10.2 million undocumented adults already in the United States, a new Pew Research Center analysis this week showed why the expulsion favored by some Republicans would not only be nearly impossible, but cruelty on an almost unimaginable scale. In a nutshell, millions have been in their U.S. communities for years. And they have children.
Using 2010 U.S. Census data and its own methodology, the Pew Hispanic Center found that two-thirds of adult illegal immigrants have been in the country for over a decade.

The Pew Hispanic analysis finds that 35% of unauthorized adult immigrants have resided in the U.S. for 15 years or more; 28% for 10 to 14 years; 22% for 5 to 9 years; and 15% for less than five years.
The share that has been in the country at least 15 years has more than doubled since 2000, when about one-in-six (16%) unauthorized adult immigrants had lived here for that duration. 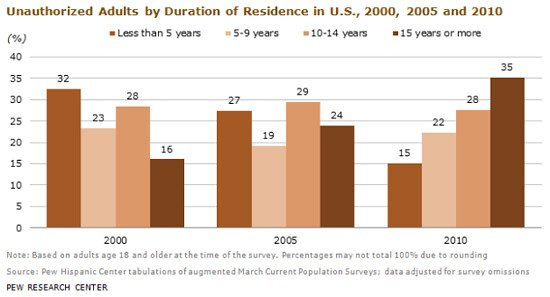 Just as important, Pew found that "that nearly half (46%) of unauthorized adult immigrants today--about 4.7 million people--are parents of minor children."
The implications for Republican hard liners are clear and frightening. The kind of mass deportation or temporary repatriation favored by some of the GOP contenders would split families, cost tens of billions of dollars and trigger a humanitarian nightmare of epic proportions.
But as Doyle McManus of the Los Angeles Times detailed Sunday, the Republican White House hopefuls trying to out-tough each other are undeterred:

Recent weeks have seen a furious battle among the GOP candidates over who can take the hardest line on immigration.
It began in September, when former Massachusetts Gov. Mitt Romney attacked Texas Gov. Rick Perry for having granted in-state college tuition to the children of illegal immigrants in Texas. Then, last month, Romney attacked former House Speaker Newt Gingrich over his support for a plan that would grant temporary work permits -- but not a path to citizenship -- to illegal immigrants who had lived in the United States for 25 years.
Rep. Michele Bachmann jumped into the fray promising that, if elected, she would try to deport every one of the estimated 11 million illegal immigrants in the country. Perry, still smarting from his college-tuition gaffe, said he'd seek more deportations too, as did former Sen. Rick Santorum, who added: "I don't like to break up families, but ... we're not sending them to Siberia. They're going to Mexico, which is a great country, a nice country."

How nice a country the U.S. would be is another question.
As it turns out, that fear is shared by some rank-and-file Republicans and officeholders alike. A Fox News poll last year found that "almost two-thirds of Republicans believe that 'illegal immigrants who pay taxes and obey the law' should be given a chance to remain in the United States under some kind of legalization program." As the Wall Street Journal reported two weeks ago:

Some top Republicans, including former Florida Gov. Jeb Bush and strategist Karl Rove, argue that the country can't simply deport 11 million undocumented immigrants, and they say the antipathy of the fast-growing Hispanic community poses a significant threat to the party.

For his part, Tea Party darling and son of Cuban immigrants Marco Rubio lamented, "We cannot be the anti-illegal immigration party."
But judging from the backlash from GOP primary voters when Rick Perry spoke of conservative hardliners having "no heart" and Newt Gingrich suggested they had no humanity, the anti-illegal immigration party is precisely what the GOP could be this fall.