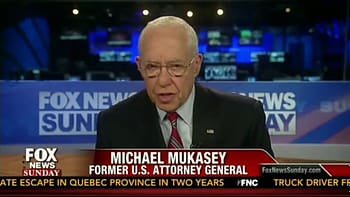 As President Trump's thinly veiled Muslim ban caused heartbreak, outrage and chaos around the globe, his Twitter past started to resurface over the weekend. As he presciently asked on June 4, 2014, "Are you allowed to impeach a president for gross incompetence?"
At least one high-profile attorney has resoundingly--and ironically--answered, "yes." Ironically, that is, because Judge Michael Mukasey was the last attorney general for President George W. Bush. And as it turns out, Mukasey was one of the advisers who helped Trump with his catastrophic executive order.
As the New York Post reported on Sunday, it was former New York Mayor Rudy Giuliani who spilled the beans on the brain trust behind Trump's travel ban:

Rudy Giuliani said Donald Trump asked him to work out how he could legally implement a "Muslim ban."
"He called me up, he said, 'Put a commission together, show me the right way to do it legally,'" the former mayor, who has been advising President Trump, said on "Fox News" Saturday.
Giuliani then said he put a panel together that included former federal Judge Michael Mukasey, Rep. Peter King and Texas Rep. Michael McCaul to come up with a plan that placed the emphasis on threats not religion.

As it has unfolded, Trump's counterproductive decree was worse than a crime, it was a mistake. Delivering a powerful propaganda victory to ISIS, the ham-handed ban left American generals and diplomats warning about the dangerous blowback for U.S. troops and interests. Students and scientists were barred from entering the U.S. Families were separated and American allies like Iraqi translators who saved countless U.S. lives were left at risk as refugees, valid visa holders and green card carriers were blocked.
But back in 2014, Michael Mukasey suggested President Obama should rightly be impeached for "the ghastly transaction that freed Sgt. Bowe Bergdahl." Despite America's long history of prisoner exchanges during wartime, Mukasey on June 6 raised the prospect of impeachment, even though it "cannot be seriously undertaken absent a national consensus for it, and none seems now to exist." Two days later on June 8, Bush's former attorney general told Chris Wallace of Fox News Sunday that a president can be impeached despite having not committed high crimes or misdemeanors:

He has the authority to do so, but the question is under what circumstances he does so? The -- when Lindsey Graham called for impeachment being on the table, I think what he was disclosing and making clear is that whether you impeach somebody doesn't depend on whether they violate the law. The president can stay within his lawful powers and still commit an impeachable offense.
He has the power to pardon anybody he wants. If he decided tomorrow to pardon everybody in the U.S. prison system, that would be lawful, but I think it will also raise serious questions about whether he should continue in office.
The same is true of the wholesale release of dangerous people.

Now, this kind of blighted logic is nothing new for Attorney General Mukasey.
President Bush, after all, released hundreds of Gitmo detainees in exchange for, well, nothing. Nominated to replace the bumbling Alberto Gonzales, Judge Michael Mukasey enjoyed the support of both past Senate Majority Leader Harry Reid (D-NV) and current Minority Leader Chuck Schumer (D-NY). Despite the warning from former Reagan deputy AG Bruce Fein that Mukasey did not have "the national stature and strength in Congress to resist White House overtures to insist that he bend the law to assist the political agenda," the judge was ultimately confirmed. Confirmed, that is, despite deceiving the Senate Judiciary Committee about his views on torture.
After leaving the Bush White House, Mukasey happily accepted his new role as right-wing attack dog. He vilified President Obama over waterboarding and other so-called "enhanced interrogation techniques" and over the release of the Bush torture team memos in 2009. In 2011, he gave credit to George W. Bush for the raid Obama ordered that killed Osama Bin Laden. Mukasey even wrongly accused the Obama administration of having "drafted a memo to protect the president from blame if the mission to kill or capture Osama Bin Laden would have failed." Last July, Judge Mukasey called for Hillary Clinton's prosecution over her use of a private email server, even going so far as to question FBI Director James Comey's "credibility and judgment" for not having done so.
For all those reasons and so many more, I wouldn't rely on Judge Michael Mukasey to make my case for anything. But now, he's advising Donald Trump. And when it comes to an executive order as dangerous, disastrous, immoral and inhumane as Trump's Muslim ban, Mukasey has already argued for the president's removal for much less. As for my advice to Donald Trump, well, you go to war on the constitution with the lawyers you have, not the ones you might want or wish for at a later time.