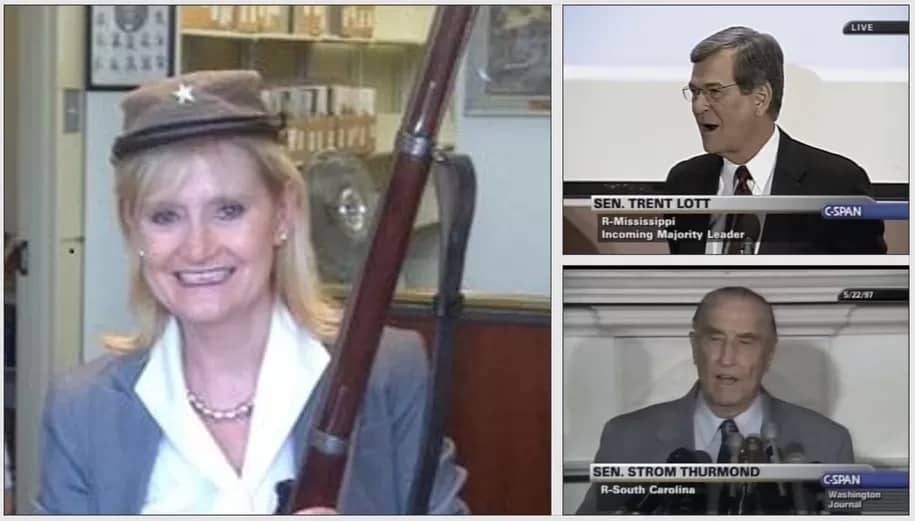 Republicans and their amen corner in the right-wing media are trying to perpetuate yet another hoax on the American people. In a nutshell, they claim that history ended in 1865 or, at the latest, 1965. But sadly for them, three of their leading lights past and present—Cindy Hyde-Smith, Trent Lott and Strom Thurmond--already gave the game away.

The unabridged version of this grotesque GOP fraud goes like this. Solid majorities of the American people support both the cause of the Black Lives Matter protests and the call to consign Confederate hagiography in the Capitol to the dustbin of history. But with stoking white racial grievance a central Republican electoral strategy for over 50 years, Republicans must be opposed. To escape their political dilemma, the GOP must, well, whitewash America’s recent past to pretend their current villainy is instead heroic and just. In this conservative mythology, because the Democrats were once the party of slavery, secession, the Confederacy and Jim Crow, they therefore still are.

Of course, this scam requires the likes of Texas GOP Senators John Cornyn and Ted Cruz, Congressmen Dan Crenshaw (R-TX) and Louie Gohmert (R-TX) and, most of all, Dinesh D’Souza to pretend that the Great Party Switch which began in the mid-1960’s never happened. As Princeton historian Kevin Kruse among others has documented at length, the Democrats’ embrace of the civil rights movement triggered the exodus of Southern white conservatives and Southern white voters into the welcoming arms of the Party of Lincoln. Over time, most of the Southern Democrats who voted against the Civil Rights Act of 1964 and the Voting Rights Act of 1965 migrated to the Republican Party. The resulting transformation of the American electoral map is as clear and red and blue.

But you don’t have to take my word for it. Listen to these three Republicans explain the Great Party Switch instead.

For starters, take Mississippi Republican Senator Cindy Hyde-Smith.  During her run for the Senate, voters learned that she had attended a segregated private academy and posed for a photo with a rifle while wearing a Confederate soldier’s hat. But when she was attacked by fellow Republican Chris McDaniel for having been a Democrat as recently as 2008, Hyde-Smith offered a little history lesson. As the Jackson Free Press reported:

Indeed, most white Mississippians did vote for Democrats 40 years ago because the realignment of the Democratic and Republican parties was not yet complete in Mississippi.

Which is exactly right. 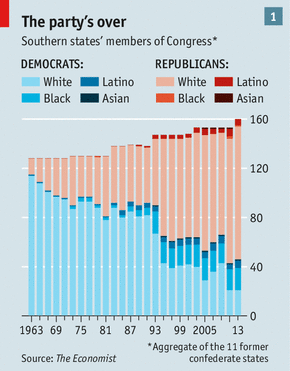 After the controversy involving Fannie Lou Hamer and the demand that the 1964 convention seat delegates from her Mississippi Freedom Democratic Party, segregationist Senator Charles Pickering switched parties/ Why? Because, he said, the people of Mississippi "were heaped with humiliation and embarrassment at the Democratic Convention.” So when his mentor, 40-year Pascagoula Democratic veteran William H. Comer retired, Trent Lott ran for his House seat as a Republican.

As a Congressman and later as a Senator, Lott didn’t merely refer to the Civil War as “the war of aggression” and declare “Sometimes I feel closer to Jefferson Davis than any other man in America.” Echoing a remark he made inn 1980, in December 2002 the incoming Senate Majority Leader praised Republican Senator Strom Thurmond (R-SC) on the occasion of his 100th birthday:

"I want to say this about my state: When Strom Thurmond ran for president, we voted for him. We're proud of it. And if the rest of the country had followed our lead, we wouldn't have had all these problems over all these years."

Of course, when the Democrat Strom Thurmond ran for President of the United States as a Dixiecrat, he did so explicitly in opposition to the DNC’s 1948 civil rights platform.  That whitest of White House hopefuls Thurmond left no doubt about what he considered “those problems” to be:

"All the laws of Washington and all the bayonets of the Army cannot force the Negro into our homes, our schools, our churches."

Thurmond was at the forefront of the Great Party Switch that still took time to complete. After all, the South had been solidly Democratic for over 100 years. But as Kruse showed in his detailed destruction of D’Souza, the migration of white elected officials and their white voters to the Party of Lincoln soon grew from a trickle to a flood. To complete that conversion, candidate Ronald Reagan traveled to Philadelphia, Mississippi to kick-off his 1980 presidential campaign. There, where civil rights workers James Chaney, Andrew Goodman and Michael Schwerner were slaughtered in 1964, Reagan declared "I believe in states' rights." Reagan, who had denounced the so-called "welfare queen," the "strapping young buck" and declared the 1965 Voting Rights Act "humiliated the South," soon had more company among southern conservatives in Republican ranks. In 1983, Texan Phil Gramm joined the GOP. Eleven years later, Alabama's Richard Shelby followed suit. It's no wonder that casual race-baiting long-discredited notions like states' rights, secession, and nullification are now standard fare on today's Republican menu.Democrat Strom Thurmond didn’t merely vote against the Civil Rights Act of 1964; he led opposition to LBJ’s bill with a 24-hour filibuster. But when that bill passed and President Johnson signed into law, Thurmond bolted the Democratic Party for the GOP and its standard bearer that fall, Senator Barry Goldwater (R-AZ). When Johnson said of that bill, “There goes the South for a generation,” he was off by at leas a factor of two.

Of course, it is awfully difficult for Republicans to acknowledge the greatest trade in American political history. Cindy Hyde-Smith’s admission was a Kinsley Gaffe in which she inadvertently told the truth.  In the Great Trade, the Democrats got civil rights, justice, equal protection of the law, Dr. King and the spirit of Abraham Lincoln. In exchange, the GOP got states’ rights, the Ku Klux Klan, Jesse Helms, Strom Thurmond and white supremacy.  There is simply no way around that inescapable truth.

Unless, of course, you pretend American history ended in 1965. But it didn’t.