Iraq's Mosul Offensive, Mocked by Trump, Has ISIS on the Run 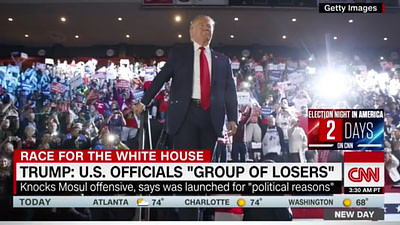 While Americans have been focused on the growing crisis surrounding the Trump administration's tangled web of ties to Russia, the good news coming from Iraq has gone largely unnoticed. After successfully liberating eastern Mosul from ISIS fighters, Iraqi forces have launched their final offensive to retake the western of the city from the Islamic State. With close support from U.S. advisers and bolstered by Shiite militia units, some 40,000 Iraqi troops hope to eliminate the remaining, well-entrenched ISIS gunmen over the next six months.
The progress in freeing the city of some 800,000 people captured by the Islamic State in 2014 has brought a new sense of optimism. As Rukmini Callimachi reported two weeks ago for the New York Times, in eastern Mosul "the streets were busy with civilian traffic" and remarking "what stunned me is quickly life has returned." In Baghdad on Monday, U.S. Defense Secretary James Mattis promised, "The coalition forces are in support of this operation and we will continue...with the accelerated effort to destroy ISIS." Meanwhile on state run television, Iraqi Prime Minister Haider al-Abadi announced "a new dawn" while urging his troops "to move bravely forward to liberate what is left of the city."
But the one voice that has been silent about the positive developments from Mosul is the one you'd normally least expect. But it should be no surprise that President Donald Trump has nothing to say now. After all, he predicted the attack on Mosul would be a "total disaster."
Take, for example, candidate Trump's volley aimed at U.S. and Iraqi leaders during the third presidential debate on October 19, 2016:

"About three months ago, I started reading that they want to get the leaders and they're going to attack Mosul. Whatever happened to the element of surprise, OK? We announce we're going after Mosul. I have been reading about going after Mosul now for about -- how long is it, Hillary, three months? These people have all left. They've all left.
The element of surprise. Douglas MacArthur, George Patton spinning in their graves when they see the stupidity of our country."

Mosul, of course, is the second largest city in Iraq. Its recapture is a strategic necessity if ISIS to be beaten back and crushed. That it must and would be liberated was certainly no secret. Signs of the build-up to encircle the city would be unmistakable. Iraqi forces would need to give civilians time to flee and allow those fighters who would to drop their arms. As U.S. military experts like retired colonel and former dean of the Army War College Jeffrey McClausland made clear, "What this shows is that Trump doesn't know a damned thing about military strategy."
Nevertheless, Trump's kept up his withering criticism of the Mosul operation. As the New York Times recounted after that debate:

In the debate on Wednesday and on the campaign trail, Mr. Trump has all but accused the military of aiding and abetting the escape of the Islamic State's top leaders from Mosul. "By the time we attack them, all the guys that we want are going to be gone," Mr. Trump told supporters in Charlotte, N.C. last week. "They're very smart. How stupid are the people that run our country?"

On October 23, Donald Trump took to Twitter to answer his own question:

The attack on Mosul is turning out to be a total disaster. We gave them months of notice. U.S. is looking so dumb. VOTE TRUMP and WIN AGAIN!

As NPR documented on November 1, Trump wasn't done there:

In the debate on Wednesday and on the campaign trail, Mr. Trump has all but accused the military of aiding and abetting the escape of the Islamic State's top leaders from Mosul. "By the time we attack them, all the guys that we want are going to be gone," Mr. Trump told supporters in Charlotte, N.C. last week. "They're very smart. How stupid are the people that run our country?"

And Trump still wasn't done slandering President Obama, Hillary Clinton, the Pentagon and the Iraqi government. As CNN reported just one day before voters went to the polls in the U.S.

The Republican presidential nominee knocked US officials as a "group of losers" for not launching a "surprise" attack and said he was convinced the offensive -- which is led by the Iraqi military -- was launched "for political reasons" to benefit his Democratic opponent Hillary Clinton. He suggested she would get "credit" for its success.
Trump's repeated criticisms of the ongoing military operation in Mosul come despite forces on the ground making key gains.
"Whatever happened to the element of surprise, right?...What a group of losers we have. And now it's a very tough battle, they're dug in. It's a very -- much tougher than they thought," Trump said at a campaign event in Tampa, Florida. "We need different thinking in this country, folks. They should have kept their mouths shut."
Those remarks came after he questioned the core rationale behind the military offensive, which is central to defeating the terrorist group in Iraq.
"Who benefits by us getting Mosul?" Trump asked the previous night during a rally in Hershey, Pennsylvania. "You know it's going to benefit Iran. We're not going to benefit. Because Iran is taking over Iraq."

Ironically, Trump will benefit "by us getting Mosul." As Middle East policy expert Andrew Exum summed it up recently in The Atlantic, "Donald Trump will defeat ISIS and it will be mostly due to the work of his predecessor."

The dysfunction at the highest levels of the American government right now obscures a dramatic reality: Donald Trump is going to defeat the Islamic State, and Americans need to be fine with that.

Most Americans will--and should be--fine with that. So far, the only one who isn't seems to be Donald Trump himself. While Vice President Mike Pence visited Iraq on February 18 and "underscored the urgency of continued progress in the fight against ISIS, Iraq's economic recovery, and cooperation to liberate Mosul," during his February 10 phone call with Prime Minister Abadi Trump could only muster congratulations to "Iraqi forces on their recent progress in Mosul." But in his only public statement on the matter, on February 16 President Trump for some reason pointed to the Mosul operation as exactly what didn't want to do in response to recent Russian moves, including Putin's test launch of a banned cruise missile and buzzing U.S. warships with Russian jets.

For once, Donald Trump is telling the truth. He complained about the Mosul offensive throughout his campaign. But to take credit for its eventual success--which he surely will try to do--Trump will have do something he never does.
Admit he was wrong.