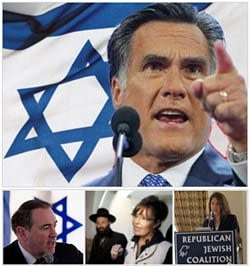 As Mitt Romney begins his excellent adventure in Israel, it's worth noting the many advantages he enjoys over his former Republican rivals when it comes to courting Jewish voters. For starters, Romney considers Israeli Prime Minister Benjamin Netanyahu "my friend," one with whom he shares "common experiences" and "can speak in shorthand." (Whether or not Bibi feels the same way is another matter.) Meanwhile, casino mogul Sheldon Adelson is not only pouring millions of dollars into Romney's campaign and GOP outreach to Jewish voters in the U.S., but has already provided his Israel Hayom paper as a friendly megaphone in advance of Romney's arrival in Jerusalem. And unlike most of the GOP's would-have-been White House hopefuls, Mitt hasn't declared either that God called him to run for President or that Jews will serve as biblically-mandated cannon fodder heralding the Second Coming of Christ.
But while Mitt Romney's slanders about President Obama "throwing Israel under the bus" and tough talk on Iran may yet be enough to have an impact in states like Florida and Ohio, the prospects for major GOP inroads among Jewish voters remain dim. As the polling shows, on almost every issue Republican orthodoxy simply isn't kosher with Jewish Americans.
A recent Gallup survey showed that Barack Obama enjoys a 68 to 25 percent edge over Mitt Romney among Jewish voters. While that margin is less than Obama's 78-21 win over John McCain in the 2008 election, it's only a few points smaller than the gap at the same point four years ago. A poll conducted two months by the Berman Jewish Policy Archive at New York University revealed why the Jewish community continues to reliably vote for Democrats, "election cycle after election cycle":

The poll, which has a four percent margin of error, also found high support among Jews not just for social causes they have long championed including gay marriage (68 percent support) and access to legal abortion (63 percent favor) , but on economic issues such as taxation. Sixty-five percent said they support raising income tax for those who earn above $200,000 a year and 62 percent said they thought the power of financial institutions pose a threat to the United States.
The survey also found that 73 percent of those polled favored the government requiring private health insurance to cover birth control.

As Haaretz noted in reporting on the survey, "Israel related issues seem to have little effect on Jewish voters' decision in choosing between Obama and Romney." That finding echoed the results of an April poll conducted by the Public Religion Research Institute, a not-for-profit, nonpartisan organization:

A majority of 51% pointed to the economy as the issue most important to their vote, followed by gaps between rich and poor (15%), health care (10%) and the federal deficit (7%). Only 4% of Jewish voters said Israel was the most important issue for them when deciding who should get their vote. Even when asked to name their second-most-important issue, Jewish voters gave the issue of Israel only marginal importance.
The data would suggest that the Republicans' focus on attacking both Obama's record on Israel and his troubled relations with Israeli Prime Minister Benjamin Netanyahu was having little, if any, traction.

The PRRI study showed a Jewish electorate that is perhaps the single most liberal voting bloc in the United States:

Jews strongly believe that the government should play a greater role in reducing gaps between rich and poor, and an overwhelming majority of them support the "Buffett Rule," which calls for increasing taxes for the rich. Most Jews (52%) state they'll agree to pay more taxes to fund programs that help the poor...They strongly supported abortion rights (93%), same-sex marriage (81%) and environmental regulation (69%). They said the Supreme Court should not overturn health care laws.

"Whoever wants to appeal to Jewish voters has to go through social values," CEO Robert Jones explained. "Our poll shows that you cannot appeal to these voters through the single issue of Israel." GOP spin meister Frank Luntz agreed:

"Concerns about Obama and Israel have been trumped by the right-wing language of Republican candidates. The Jewish community is looking at the fight over abortions and contraceptives and religion, and they don't like it."

And they didn't like it four years ago, either. In 2008, Republican vice presidential nominee Sarah Palin reminded Jewish voters why they vote Democratic.
Four years ago, Republicans had high hopes of peeling away Jewish voters from the Democratic Party. Pointing to Barack Obama's name and his former pastor, Jewish Republican groups called Obama "naive and dangerous" who as President could trigger a second Holocaust. But despite their early optimism, Obama's ultimate Jewish support on Election Day was little different than other Democratic candidates past.
As it turned, out, a key factor in John McCain's failure to get American Jews to choose him was his choice of Sarah Palin as his running mate. In the run-up to the 2008 election, Newsweek reported that "Palin may hurt McCain among Jewish voters." The dynamics in Florida, later carried by Barack Obama, were particularly telling:

Many Florida Jews who had previously been open to McCain appear to share the couple's aversion to Palin, according to political scientists, polling data and anecdotal reporting. "She stands for all the wrong things in the eyes of the Jewish community," says Kenneth Wald, a professor at the University of Florida. Among the examples he cites: Palin seems to disdain intellectualism, she's a vociferous opponent of gun control and she attended a fundamentalist church that hosted Jews for Jesus, which seeks to convert Jews to Christianity. (Palin apparently sat through a speech by a leader of the group in which he said terrorist attacks on Israel were punishment for Israelis' failure to accept Jesus as the Messiah.)

Despite polling which suggested Obama lagging among Jewish voters traditionally loyal to Democrats, the Illinois Senator ultimately maintained his party's hold on its vital constituency. Despite the fear-mongering of the McCain campaign and state GOP operatives, Obama dominated among Jews by 78% to 21%. By way of comparison, John Kerry (74% to 25% for Bush) and Al Gore (80% to 17%) scored about the same as Barack Hussein Obama with American Jews. As Newsweek concluded:

"There's no question that Obama came into this election with probably less going for him than most Democratic nominees," says Wald. But the Palin pick "probably blunted any gains the Republicans had made."

In an article titled, "I Find Her Offensive," Salon echoed that finding. "John McCain was making a bid for South Florida's Jewish voters, a crucial demographic in a purple state," Tristram Korten wrote, "But then he chose Sarah Palin as a running mate."
Mitt Romney probably won't make a similar mistake. But given the limits on his ability to get Jewish voters to leave the Democratic Party, his real purpose in heading to the Holy Land may be to turn out the evangelical base so devoted to his Republican Party.
And those two objectives can work at cross-purposes. For Christian Zionists like Michele Bachmann ("Support for Israel is handed down by God and if the United States pulls back its support, America will cease to exist"), Rick Perry ("As a Christian I have a clear directive to support Israel") and Mike Huckabee ("no such thing as a Palestinian"), Israel serves merely as a means to an end. In that telling, it is a divinely required stepping-stone to the End Times conversion (and much larger slaughter) of the Jews that will accompany the Second Coming of Christ. And that has a real impact on foreign policy. As the controversial head of the Christians United for Israel, Pastor John Hagee, explained in 2006:

"The United States must join Israel in a pre-emptive military strike against Iran to fulfill God's plan for both Israel and the West...a biblically prophesied end-time confrontation with Iran, which will lead to the Rapture, Tribulation, and Second Coming of Christ."

"Like all of you, I Iove this country deeply...indeed the only thing that you love more is the living Christ."

Evangelicals may have loved the message, but Jews not so much. As syndicated columnist Jacob Sollum answered Governor Perry:

"My response to The Response: No, thanks. My people have managed without Jesus for thousands of years. Why start now?"

As Mitt Romney visits Israel, the same might be said about the Republican Party.