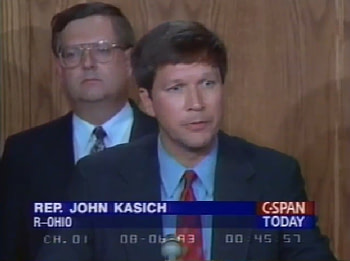 Running third in the race in the race for the 2016 Republican presidential nomination, Ohio Governor John Kasich nevertheless insists he's in it to win it. His refusal to yield is based on two equally bogus selling points. Compared to Donald Trump and Ted Cruz, the union-busting, abortion-ending Kasich portrays himself as a relative moderate. More important, the former GOP Congressman and Fox News host claims his supposed "Ohio miracle" and 1990's leadership make him uniquely qualified to direct the American economy.
Sadly for Kasich, his resume on the economy is a transparent fraud. As the New York Times and Politico among others thoroughly documented, during Kasich's tenure the Buckeye State has been outperformed on job creation by neighboring Indiana, Michigan and Kentucky. As the numbers show, it was President Obama's rescue of the U.S. auto industry, and not John Kasich's leadership, which saved the Ohio economy. More comical still, Governor Kasich now claims he and his Republican colleagues deserve the credit for the 1990's Clinton boom which generated 22 million new jobs and balanced budgets despite Kasich's own warnings of looming economic disaster.
As the Washington Times reported, Governor Kasich first claimed GOP paternity for Bill Clinton's economic expansion during the primary in neighboring Michigan:

"You mark my words: Hillary Clinton in the fall will be bragging about the Clinton economy. You know why it happened? Because Republicans got in, cut taxes, balanced budgets and forced Bill Clinton to go along."

As it turns out, Kasich's historical rewrite doesn't pass the giggle test.
As you may recall, the newly inaugurated President Bill Clinton in 1993 proposed a stimulus and deficit reduction package that included higher taxes on wealthier Americans. The $496 billion bill just scraped by Congress, passing without the support of single Republican lawmaker. As the New York Times reported at the time, "Historians believe that no other important legislation, at least since World War II, has been enacted without at least one vote in either house from each major party." Just as they did two decades later when President Obama sought to boost tax rates on America's richest taxpayers, Republicans warned Clinton's plan was "class warfare" and a "job killer" which will "kill the current recovery and put us back in a recession" and still "not give you deficit reduction."
As David Waldman and Andrew Tobias documented several years ago, Rep. John Kasich was among those screaming loudest. On May 27, 1993, Kasich warned President Clinton, "Your economic program is a job killer." On July 28, Kasich issued another jeremiad, proclaiming, "We have a stagnant economy and there is nothing down the road that makes it look like we're going to have the kind of economic growth that puts people to work." Days later on August 3, 1993, the future Ohio Governor raged:

"Do you know what? This is your package. We will come back here next year and try to help you when this puts the economy in the gutter..."

Kasich was joined in his nightmare predictions by a Republican Party united in opposition to the Clinton plan. Throughout 1993, President Clinton faced venomous - if completely baseless - charges from his Republican opponents. Newt Gingrich announced that February, "I believe that that will in fact kill the current recovery and put us back in a recession," while also warning the day before the budget vote, "This is the Democrat machine's recession, and each one of them will be held personally accountable." Bob Dole, Clinton's future reelection opponent, complained, "People out there in the real world just don't understand how record-setting tax increases and a taxpayer-financed spending spree by Congress will solve the deficit or put Americans back to work." Meanwhile, future Tea Party sugar daddy Dick Armey read his tea leaves:

"Clearly this is a job killer in the short run. The revenues forecast for this budget will not materialize; the costs of this budget will be greater than what is forecast. The deficit will be worse, and it is not a good omen for the American economy."

In August 1993, Republicans deployed their biggest gun - Ronald Reagan - to direct fire at President Clinton. The Gipper, the same man who tripled the U.S. national debt in eight years, blasted away from the op-ed pages of the New York Times:

"The President's 'wonder plan' could be cited for deceptive advertising by the Food and Drug Administration. Job-killing taxes come right away, and hazy spending cuts are on the distant horizon. The five-year plan will likely impede economic growth and not come near its claim of $500 billion in deficit reduction."

Most dramatic of all was Texas Senator Phil Gramm. The same man who led the 1990's crusade to gut regulation of Wall Street and the IRS and later called America a "nation of whiners," boldly - and wrongly - predicted:

"I believe hundreds of thousands of people are going to lose their jobs...I believe Bill Clinton will be one of those people."

The Republican naysayers were, of course, utterly wrong on every count. Bill Clinton kept his job and presided over a rapidly growing economy, expanding incomes, new stock market highs and a balanced budget. Clinton, who helped author one of the best eight-year economic performances of the modern presidents, bequeathed a CBO-estimated $5.6 trillion surplus to his successor, the man with the worst economic record. Alas, with his tax cut windfall for the wealthy, George W. Bush squandered the Clinton surpluses. For the record high income inequality and historically low tax burden they helped produce, Bush and Congressional Republicans yielded only a million new jobs - and red ink as far as the eye could see.
Of course, that was then and this is now. And now, John Kasich is running for President of the United States. And as he wages his long-shot campaign to face Hillary Clinton for the White House in November 2016, he has conveniently forgotten what he said about her husband's plan for the U.S. back in 1993. AS he put on July 28 of that year:

"This plan will not work. If it was to work, then I'd have to become a Democrat."