Libya and "Bad Language": Obama and Bush Reveal Their Worst Mistakes as President 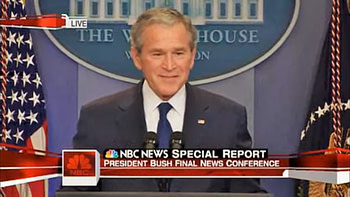 In an understandably rare interview with Fox News on Sunday, Barack Obama spoke bluntly about the "worst mistake" of his presidency. That error, as he had also recently explained to the BBC and The Atlantic, was the unraveling of Libya following the fall of Muammar Qaddafi:

"Probably failing to plan for the day after what I think was the right thing to do in intervening in Libya."

Whatever you think of that answer, Obama's mea culpa stands in stark contrast to that of his Republican predecessor, George W. Bush. To the extent he could even think of a single mistake he had made, President Bush cited only his "bad language." You read that right. The man who presided over the worst two-term economic performance since World War II, suffered the devastating 9/11 attacks on his watch, launched the catastrophic Iraq war and birthed ISIS repeatedly said his bellicose rhetoric like "dead or alive" or "bring them on" wasn't just his biggest mistake; it was his only mistake.
Mary Kewatt certainly agreed. As a grieving Kewatt told Minnesota Public Radio in the summer of 2003:

"We have some issues with the fact that President Bush declared combat over on May 1. Combat is not over. We don't even know who's firing at us right now, and all of our soldiers are at great risk of being picked off as Jim was. And that's a shame. And then President Bush made a comment a week ago, and he said, 'bring it on.' They brought it on and now my nephew is dead." [Emphasis mine.]

That's right. It wasn't bad enough that in just six short months President Bush went from declaring he wanted Osama Bin Laden "dead or alive" to announcing "I truly am not that concerned about him." As American casualties from insurgent attacks began to mount in the days he stood in front of a banner proclaiming, "Mission Accomplished," Dubya offered some tough talk to the supposed "dead-enders" in Iraq:

"There are some who feel like that the conditions are such that they can attack us there. My answer is bring them on."

Six years later in December 2009, Bush's former press secretary Dana Perino complained it was "demonstrably false" to suggest "that President Bush was too triumphant in his rhetoric when talking about war." As it turns, President Bush didn't just repeatedly tell us that his "bad language" and "gun-slinging rhetoric" about the war was a mistake. It was pretty much the only mistake he ever acknowledged.
As you might recall, back in April 2004--ten months after the death of Mary Kewatt's 20 year-old nephew Edward James Stergott in Baghdad, a stammering President Bush could not think of a single error he had made during his tenure in the White House:

"I'm sure something will pop into my head here...maybe I'm not as quick on my feet as I should be in coming up with one."

But by January 2007, just days after he announced the surge in Iraq, Bush admitted to Scott Pelley on CBS 60 Minutes that he had made mistakes, if only semantic ones:

PELLEY: You mention mistakes having been made in your speech. What mistakes are you talking about?
BUSH: You know, we've been through this before. Abu Ghraib was a mistake. Using bad language like, you know, "bring them on" was a mistake. I think history is gonna look back and see a lot of ways we could have done things better. No question about it.

Amazingly, Bush's most profound statement of regret about his tough talk came during Dana Perino's watch in June 2008. In London as part of his final swing through Europe before leaving the White House, President Bush told The Times of London that his cowboy rhetoric was perhaps his greatest regret:

President Bush has admitted to The Times that his gun-slinging rhetoric made the world believe that he was a "guy really anxious for war" in Iraq.
[...] In an exclusive interview, he expressed regret at the bitter divisions over the war and said that he was troubled about how his country had been misunderstood. "I think that in retrospect I could have used a different tone, a different rhetoric."
Phrases such as "bring them on" or "dead or alive", he said, "indicated to people that I was, you know, not a man of peace."

Of course, Americans can be forgiven their struggle with the notion that George W. Bush was a "man of peace," especially he endlessly bragged to them that "I'm a war president." But standing atop the rubble of the World Trade Center in lower Manhattan on September 14, 2001, Bush offered inspiration and resolve in perhaps his finest moment as Commander-in-Chief:

"I can hear you! The rest of the world hears you! And the people - and the people who knocked these buildings down will hear all of us soon."

They did hear from us, though some like Osama Bin Laden didn't actually receive the message until Barack Obama became President of the United States. Unfortunately, millions of people in Iraq who had no role in knocking those buildings down heard from us, too. And many of them--former members of Saddam's Hussein's regime, Al Qaeda militants drawn to fight U.S. forces in Iraq and disgruntled Sunni fighters alienated by the U.S. backed Shiite leadership in Baghdad--are the now backbone of ISIS today.
But in 2004, President Bush had a different name for his world-historical mistake in Iraq. That word, as he explained during an August 30, 2004 press conference was "success."

"Had we had to do it [the invasion of Iraq] over again, we would look at the consequences of catastrophic success - being so successful so fast that an enemy that should have surrendered or been done in escaped and lived to fight another day."

Fight another day, indeed, for ISIS. In Iraq, in Syria and in Libya. And calling that "catastrophic success" is just bad language for a horrible mistake.