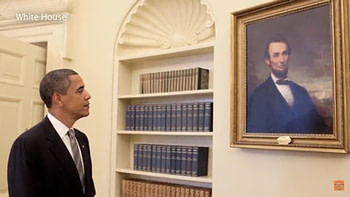 As American presidents enter their final months in the White House, they invariably focus on their legacies. That effort to shape history's judgment invariably leads to comparisons to the greatest of them all: Abraham Lincoln.
George W. Bush and his amen corner certainly tried. In September 2006, Secretary of State Condoleezza Rice compared the three-year old Iraq debacle to the Civil War. "I know there were people who said, 'Why don't we get out of this now, take a peace with the South, but leave the South with slaves?'" Five months later, Rudy Giuliani explained that Lincoln had "that ability that a leader has--a leader like George Bush" to "look into the future." The next spring, Vice President Dick Cheney similarly compared a "very courageous, very consistent, very determined" President Bush to Honest Abe, asking ABC News viewers to "think about what would have happened if Abraham Lincoln had paid attention to polls, if they had had polls during the Civil War." And in a hagiographic January 2008 Fox News documentary called George W. Bush: Fighting to the Finish, a fawning Bret Baier portrayed the Iraq war commander in chief as a 21st century incarnation to the Great Emancipator:

"We talked a lot about President Lincoln...I tell you what--he thinks about Lincoln and the tough times that he had during the Civil War. 600,000 dead. The country essentially hated him when he was leaving office. And the President reflects on that. This is a President who is really reflecting on his place in history."

Leaving aside for now Baier's butchery of history (Lincoln was assassinated just six months after comfortably winning re-election), it's clear that George W. Bush's place in history won't be a happy one. His war of choice in Iraq was a calamity measured in blood and treasure, and unleashed sectarian conflict that 14 years later is still tearing the Middle East apart. Bush also presided over an unprecedented meltdown of the American financial system that produced the worst economic catastrophe since the Great Depression. As to his legacy, Bush said hopefully in 2013, "ultimately, history will judge."
History, on the other hand, will be kind to Barack Hussein Obama, 44th president of the United States. Facing monolithic opposition before he even took the oath of office, President Obama nevertheless saved his country from the abyss. During a period of rapid economic, social, and environmental change, Obama readied his country for the future. Over his eight years in the People's House, Obama helped expand membership in our national community by enabling women, LGBT people, blacks, Latinos, Muslims, and others to redefine the very idea of who is American. And even with the prospect of a period of reaction that will undo some of these gains, over time Obama's vision will be vindicated and realized, including among many who vilified him at the time.
Much like Abraham Lincoln.
Now, elevating Barack Obama to Lincoln's heir may seem like quite a reach. For the first Republican president, after all, nothing less than the very existence of the United States of America was at stake. But with a little time and a little distance, the magnitude of his achievements, the significance of his historical role, and the radicalness of his mission for America became clearer. What the legendary abolitionist Frederick Douglass said about his friend Abraham Lincoln in 1876 could be applied to Barack Obama 140 years later. At the dedication of the Freedmen's Monument on April 14, 1876, Douglass first crystallized the challenge Lincoln faced:
Continue reading at Daily Kos.