Lynne Cheney Wrote about the Sisters 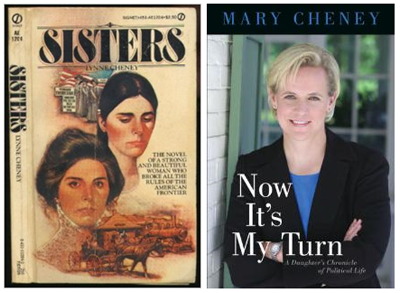 Even without the occasional shotgun blast in the face, this Thanksgiving at the Cheney home could offer some real fireworks. Former Vice President Dick Cheney and his wife Lynne declared themselves "pained" at the very public split between their daughters over the issue of marriage equality. But while Mary Cheney is helping Freedom Indiana fight restrictions on the rights of gay couples in the Hoosier State, would-be Wyoming Senator Liz Cheney with her parents' support is running a new ad which "features her three daughters in a campaign of sisterly love that attempts to counter the internal family strife that found its way onto Facebook."
As it turns out, if anyone knows about sisterly love of a sort, it's Lynne Cheney. After all, she wrote about it in her 1981 novel about lesbian love in the Old West, Sisters:

"The women who embraced in the wagon were Adam and Eve crossing a dark cathedral stage - no, Eve and Eve, loving one another as they would not be able to once they ate of the fruit and knew themselves as they truly were."

Perhaps, when they are not hurling yams and bludgeoning each other with drumsticks, the Cheneys can have good laugh about the good old days when men were men, women were women, Americans would be "greeted as liberators" in Iraq and Dad opposed President Clinton's sanctions on Iran because "the problem is that the good Lord didn't see fit to always put oil and gas resources where there are democratic governments." In a lighter moment, the clan might fondly remember the Vice President Cheney's August 2004 opposition to President Bush's call for a constitutional amendment to outlaw same-sex marriage:

"Freedom means freedom for everyone," he said at a campaign rally in Davenport, Iowa.
"Lynne and I have a gay daughter, so it's an issue our family is very familiar with," Cheney said as his daughter Mary stood in the audience. He said he opposes the constitutional amendment to ban same-sex marriage that Bush has endorsed.
"But the president makes basic policy for the administration," he added.

If that formulation sounds familiar, it should. After all, Liz Cheney herself used it in 2009. And in an October 2004 debate, Democratic presidential candidate John Kerry said pretty much the same thing. Asked if homosexuality is a choice, Kerry responded, "If you were to talk to Dick Cheney's daughter, who is a lesbian, she would tell you that she's being who she was, she's being who she was born as." (As she did with Cokie Roberts four years earlier, mother Lynne Cheney went ballistic, declaring "he is not a good man" who has resorted to "a cheap and tawdry political trick.") Or, as Mary put it this week:

"Freedom means freedom for everyone. For me, that's not just another saying. It's who I am -- the core of what I believe. No one should be denied the fundamental liberties we all deserve."

On Thursday, Mary Cheney and her wife Heather can listen to the rest of her family explain why their right to marry is an issue for the states to decide. Apparently, Lynne Cheney still believes they are trying to love one another "as they would not be able to once they ate of the fruit and knew themselves as they truly were."