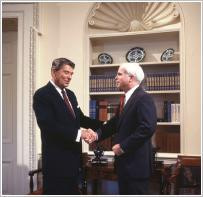 As part of his twilight struggle to remain relevant in national politics, failed Republican White House hopeful John McCain has apparently launched a new effort to block some of President Obama's executive branch nominees. But while the Arizona Senator claims his opposition to Christopher Hill as ambassador to Iraq is based on concerns over his past conduct of diplomacy with North Korea, McCain's rejection of David Hayes as the number two man at the Interior Department is personal. Hayes, the self-proclaimed "foot soldier in the Reagan revolution" charged, made "highly offensive" remarks about the Gipper.
As the Wall Street Journal reported, during hearings yesterday McCain objected to an April 2006 article Hayes had written suggesting Ronald Reagan and George W. Bush were two peas in a pod:

In the article, Hayes wrote that "the conservative political agenda in the West is grounded in hoary stereotypes about the region and its people" and that "out of this conservative world view emerges the stereotypical Western man (and it is unquestionably a 'he') - a rugged, gun-toting individualist who fiercely guards every man's right to drill, mine, log, or do whatever he damn well pleases on the land" and that "Like Ronald Reagan before him, President Bush has embraced the Western stereotype to the point of adopting some of its affectations - the boots, brush-clearing, and get-the-government-off-our-backs bravado."

After berating Hayes ("So you had to throw Reagan in there?") and extracting the requisite mea culpa from the Obama nominee ("I shouldn't have done that"), McCain pronounced his judgment:

"I wouldn't have said something like that about [Clinton secretary] Bruce Babbitt...I will be considering seriously whether I can support your nomination or not."

Of course, McCain's manufactured outrage is doubly ironic. For one, Hayes' ham-handed characterization of the conservative mythology of westerners in general and Ronald Reagan is largely accurate. Second, James Watt, Reagan's own Interior Secretary, not only helped perpetuate that ethos, he was among the most "highly offensive" Cabinet figures in modern American history.
Watt, after all, was eventually forced to resign after his infamous September 1983 slur of his team at the Interior Department:

"I have a black, a woman, two Jews and a cripple. And we have talent."

But as Time detailed in its October 1983 post-mortem, Watt's slash and burn policies on strip mining, land use, wilderness management and oil drilling were his true legacy:

His legions of eager critics will not have James Watt to kick around any more. Indeed, Watt will probably be most remembered for the kind of righteous, goading declarations that finally forced his resignation: long before his crack about "a black, a woman, two Jews and a cripple," Watt had said that the electorate is composed of "liberals and Americans" and that Beach Boys fans are riffraff. But Watt did more than just make inflammatory pronouncements. He pushed through radical changes in Interior policy, most of which are likely to endure at least as long as Ronald Reagan is President. And some elements of the Watt legacy are irrevocable.

John McCain's protests notwithstanding, the continuity between the Reagan/Watt Interior Department and George W. Bush's is unmistakable. At most, the two were different in degree and not kind. The Bush Interior Department was more aggressive and corrupt, Reagan's more insulting to the American people.
UPDATE: Reagan de-hagiographer Will Bunch weighs in, noting among other things John McCain's own "highly offensive" 1998 joke about Chelsea Clinton.