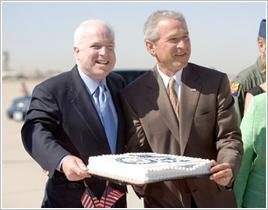 In the latest chapter of their campaign of contrasts, Barack Obama and John McCain are set to mark two very different milestones this week. On Thursday, Obama will accept his party's nomination on the 45th anniversary of Dr. Martin Luther King Jr.s' "I Have a Dream" speech. But in an altogether different act of symbolism the next morning, John McCain will announce his running mate on his 72nd birthday. That date also just happens to mark three years to the day President Bush presented McCain with a birthday cake in Arizona even as Hurricane Katrina slammed ashore in New Orleans.
In Denver, an estimated crowd of 75,000 people will fill Invesco Field on Thursday to hear Obama accept the Democratic presidential nomination. The symbolism of Obama, the first African-American nominee of a major American political party, harkening back to Dr. King's "fierce urgency of now" won't be lost on the convention delegates, some of whom saw King deliver his speech in Washington, DC on August 28th, 1963. (No doubt, that symbolism is lost on the National Review, which proclaimed "quite probable that King, were he alive today, would not vote for Barack Obama." John McCain's country club economics, dismal record on civil rights and consistent opposition to the creation of the Martin Luther King holiday itself suggest otherwise.)
That debate aside, McCain's image management problems begin in earnest the next day with his scheduled VP announcement in Dayton. McCain's decision to highlight his birth in 1936 can only resurrect the age issue, one which he has tried to laugh off by joking, "I am older than dirt, with more scars than Frankenstein." Whoever McCain picks - Mitt Romney, Tim Pawlenty, Rob Portman, Tom Ridge, Joe Lieberman or even Colin Powell - the timing is not without risks, to say the least.
And it only gets worse.
Three years ago, as Hurricane Katrina barreled ashore the Gulf Coast, McCain joined President Bush on the tarmac at Luke Air Force base near Phoenix. Even as New Orleans was being inundated, McCain and Bush were all smiles as the President helped his former foe celebrate his 69th birthday. Their literal "let them eat cake" moment is one of the indelible images of the Bush administration's disastrous handling of the catastrophe.
To be sure, the aftermath of Hurricane Katrina didn't redound to John McCain's benefit, either. During a June 4th, 2008 town hall meeting in Baton Rouge, McCain turned revisionist historian about his own role in the reconstruction:

"I've supported every investigation and ways of finding out what caused the tragedy. I've been here to New Orleans. I've met with people on the ground. I've met with the Governor...I've been as active as anybody in efforts to restore the city."

As it turns out, not so much. McCain's rewriting of the record neglects to mention that in 2005 and 2006 he twice voted against a commission to study the government's response to Katrina. He also opposed three separate emergency funding measures providing relief to Katrina victims, including the extension of Medicaid benefits. And as ThinkProgress pointed out in June, "until traveling there one month ago, McCain had made just one public tour of New Orleans since Hurricane Katrina touched down in August 2005."
For John McCain and the American people alike, August 29th is a day of great symbolic import. He would do well to postpone his Friday running mate choice by a day. Instead, he and his family could quietly share his birthday cake at one of his homes.
(This piece originally appeared at Crooks and Liars.)
UPDATE: Fox News, among others, is reporting that McCain might move up his VP announcement to Thursday. It's a tough choice: trying to rain on Barack Obams'a parade or reminding voters that McCain stood with President Bush as the rain fell on New Orleans.

One comment on “McCain to Mark Birthday, Katrina Anniversary with VP Pick Friday”