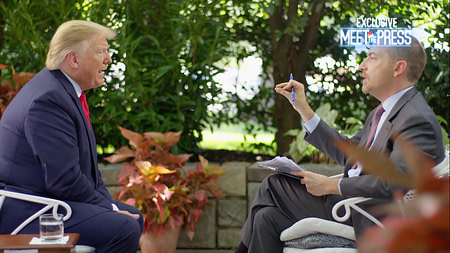 In late May, President Donald Trump shocked many when he rejected the assessments of his own administration and U.S. allies about recent North Korean violations of United Nations resolutions regarding its ballistic missile program. In response to Trump's support for the "very smart man" in Pyongyang, Meet the Press host Chuck Todd offered a novel theory to explain Trump's impunity in offering rhetorical aid and comfort to the enemy.

"I do think if the president thought there was a penalty to pay from even his own favorite channel, perhaps he would have curtailed his behavior, but they enable him too, they celebrate this now."

Yet less than a month later, Todd himself proved that Trump need not fear paying a penalty on Meet the Press, either. During his catastrophic June 23 interview with the president, Chuck Todd was unprepared and spineless, letting Trump spew uninterrupted and unchallenged obvious falsehoods about the tension with Tehran, the Iran nuclear deal, his family separation policy, Obamacare, mythical voter fraud in 2016, and so much more. Writing in the Washington Post, a horrified Jennifer Rubin warned, "Trump's lies need to be exposed in real time." And as an astonished Aaron Rupar of Vox summed up Todd's pathetic performance:

At numerous points throughout the interview, Todd let Trump get away with blatant falsehoods and gaslighting. Todd also teed up a number of softball questions for the president, like "Do you think you've been more successful in business or the presidency?" and "Do you speak to any of the former presidents?"

As it turns out, no one should be more disappointed in the Meet the Press host's disastrous display than Chuck Todd himself. After all, it was only last September that Todd had his "mad as hell/not going to take anymore" moment on the pages of The Atlantic. Decrying "the campaign to destroy the legitimacy of the American news media" and the press's failure "to defend our work in real time from this onslaught."

There's not a serious journalist alive who hasn't had one of those "gulp" moments when you realize that you really messed up. But serious journalists correct the record, serious journalistic organizations allow themselves to be held to account, own up to mistakes, and learn from them so they can do a better job the next time.

Sadly for him and for us, Todd's interview with Trump last week was that next time. And, as we'll see below, it was hardly his first strike, either.
Nevertheless, last fall Chuck Todd decided to pick up the banner for his profession and defend it from the dual onslaught of Fox News and the 45th president of the United States. As of June 7, 2019, the Washington Post's ongoing tally of President Trump's lies had reached 10,796 in just 869 days. (When Todd published his piece, the figure was 4,713 false Trump claims over his first 592 days in office.) That, combined with Trump's threats to the media he claims is an "enemy of the people" and the ongoing Fox News campaign to undermine the legitimacy of the press, apparently fueled Chuck Todd's clarion call in the pages of The Atlantic. "A nearly 50-year campaign of vilification, inspired by Fox News's Roger Ailes, has left many Americans distrustful of media outlets," Todd warned, "Now, journalists need to speak up for their work."

Instead of attacking rivals, or assailing critics--going negative, in the parlance of political campaigns--reporters need to showcase and defend our reporting. Every day, we need to do our job, check our facts, strive to be transparent, and say what we're seeing. That's what I've tried to do here. I've seen a nearly 50-year campaign to delegitimize the press, and I'm saying so. For years, I didn't say a word about this publicly, and at times I even caught myself drawing false equivalencies because I was afraid of being labeled as biased. I know that stating the obvious will draw attacks, but I've also learned that the louder critics bark, the more they care about what's being reported.
I'm not advocating for a more activist press in the political sense, but for a more aggressive one. That means having a lower tolerance for talking points, and a greater willingness to speak plain truths. It means not allowing ourselves to be spun, and not giving guests or sources a platform to spin our readers and viewers, even if that angers them. Access isn't journalism's holy grail--facts are. [Emphasis mine.]

Facts are indeed journalism's holy grail. It's just too bad Chuck Todd only had that epiphany in 2018 and not years earlier when it might have made a difference.
Continue reading at Daily Kos.