Mitt Romney is "Sticking It to Seniors"

During the 2010 campaign, Senate Minority Leader Mitch McConnell falsely charged that with the Affordable Care Act President Obama was "sticking it to seniors." McConnell's GOP was rewarded for that fiction, as a 21 point margin among voters 65 and older propelled the Republicans to an overwhelmingly victory in the midterms.
Now just two years later, it is Republican presidential candidate Mitt Romney who will really be sticking it to seniors. His Obamacare pledge to "kill it dead" will erase hard-won health protections today's elderly have gained under the ACA. Romney's proposal to slash Medicaid spending by more than a third over the next decade and give what remains as block grants to the states could jeopardize nursing home care for millions of Americans. As the Congressional Budget Office and a new Kaiser Family Foundation study confirmed, the Romney-Ryan plan to "voucherize and privatize" Medicare will invariably lead to much higher costs for future recipients.

That's the word from the Kaiser analysis, which examined the impact if a Romney-Ryan style voucher plan was implemented today. (Note that Romney's premium support proposal only applies to future Medicare beneficiaries, those now 55 or younger.) As Sarah Kliff of the Washington Post explained:

What Kaiser did was pretty simple. Its researchers modeled what would happen if seniors received a set amount from the government to pay for their Medicare benefits. That check would be equal to second-lowest bid from a private, Medicare Advantage plan. That's the same benchmark used in the Ryan Budget, Romney-Ryan proposal and the Domenici-Rivlin proposal.
That was step one. Step two was looking at whether that check would cover the cost of providing Medicare benefits under the traditional or private plans, in a given area. For 59 percent of seniors, it wouldn't: 25 million seniors would pay more for their current benefits if the government enacted this premium support model right now.

But that figure understates how the pain of Romney's Medicare gambit would be felt geographically. While nationwide 27 percent of seniors would face monthly premium increases of $100 or more, in high-cost states like Connecticut, Florida, Massachusetts and New Jersey the figure tops 90 percent (see map above).
If the Kaiser study helped answer how many American seniors would pay more for health insurance under President Romney and Vice President Ryan, the Congressional Budget Office explained how much. 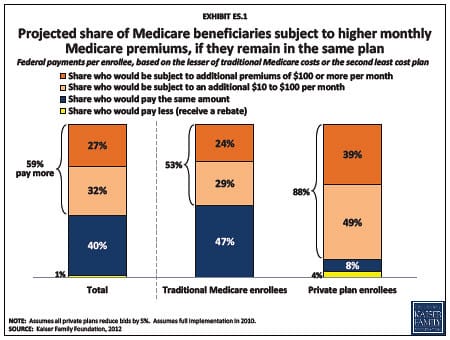 In the spring of 2011, 235 House Republicans and 40 GOP Senators voted for the Paul Ryan budget and its plan to completely replace Medicare with an under-funded voucher for each senior to purchase private insurance. The CBO calculated just how under-funded; by 2030, the Ryan's budget would dramatically shift health care costs to seniors, leaving each on average with 68 percent of the tab and an extra $6,500 in annual premiums.
Those horrible numbers led to Ryancare 2.0. The 2012 version of his Medicare overhaul maintained traditional Medicare as a "public option" in the new Ryan budget blessed by 98 percent of Congressional Republicans. While it did not earn the vote of Democratic Senator Ron Wyden, it did earn the backing of Mitt Romney. Romney didn't just merely proclaim in his 59-point, 162 page "Believe in America" manifesto that "the plan put forward by Congressman Paul Ryan makes important strides in the right direction" after having declared he would have signed the 2011 version if it crossed his desk. This August, Romney announced their plans are "close to identical." A quick glance at his web site confirms that judgment:

Nevertheless, the Congressional Budget Office (see chart above) this spring similarly concluded the newer Ryan plan endorsed by candidate Romney will still result in significant cost shifting to seniors. Looking at the CBO's March 2012 assessment of the new House GOP budget, ThinkProgress explained why version 2.0 of Ryan's voucher program was little better than the first:

Beginning in 2023, the guaranteed Medicare benefit would be transformed into a government-financed "premium support" system. Seniors currently under the age of 55 could use their government contribution to purchase insurance from an exchange of private plans or--unlike Ryan's original budget--traditional fee-for-service Medicare...
But the budget does not take sufficient precautions to prevent insurers from cherry-picking the healthiest beneficiaries from traditional Medicare and leaving sicker applicants to the government. As a result, traditional Medicare costs could skyrocket, forcing even more seniors out of the government program. The budget also adopts a per capita cost cap of GDP growth plus 0.5 percent, without specifying how it would enforce it. This makes it likely that the cap would limit the government contribution provided to beneficiaries and since the proposed growth rate is much slower than the projected growth in health care costs, CBO estimates that new beneficiaries could pay up to $2,200 more by 2030 and up to $8,000 more by 2050. Finally, the budget would also raise Medicare's age of eligibility to 67.

But it's not just the next generation of American elderly who will feel the sting of the Romney-Ryan reforms. During the first presidential debate, Mitt Romney denied he is "proposing any changes for any current retirees or near retirees." That simply is not true. His call to repeal Obamacare would take away free preventative care now part of Medicare, including cancer screenings, mammograms and other services received by 18 million Americans in the first seven months of 2012 alone. Even more costly to our parents and grandparents, President Romney would reopen the "donut hole" in the Medicare prescription drug program. That change alone saved 5.4 million seniors over $4.1 billion last year.)
But the Republicans' attack on today's elderly doesn't end there. The Romney-Ryan ticket has proposed slashing Medicaid by a third over the next decade and turning over the reduced funds to the states in the form of block grants. Combined with the repeal of Obamacare, Romney's gutting of Medicaid would add an estimated 44 million to the ranks of the uninsured, leaving a total of 72 million Americans without coverage. But the Romney-Ryan plan to savage Medicaid won't just impact the poor and working Americans. Those steep reduction threaten the 6 million elderly recipients of Medicaid, a program will which pays for 33 percent of all nursing home care.
As it turns out, what we know for sure about Mitt Romney's assault on senior citizens may pale compared to what we don't. Romney, after all, has promised to magically offset $5 trillion in tax cuts and $2 trillion in new defense spending over the next decade by closing as yet unnamed tax credits, deductions and deductions. But among Uncle Sam's $1.1 trillion in annual tax expenditures are a host of tax breaks for the elderly. That figure is forecast to hit almost $1.4 trillion by 2015. While the home mortgage and health expense deductions top that list, untaxed Social Security benefits will reach $44 billion annually in three years. And that's just one example. Mitt Romney has called for raising the retirement age to 67 for those now 55 and under. (In his 2008 campaign, Romney supported President Bush's proposal to privatize the retiree pension system.)
Which tax breaks Romney will end remains a mystery. But as he has repeatedly made clear, current and future elderly--and everyone else--will have to wait until after November 6th to find out just how badly President Romney will stick it to them.